Hither and Yon,Top Story Antifa in Portland,Bill Gates,Hydroxychloroquine (HCQ),Jerrold Nadler,Joe Biden,Mark Zuckerberg,Mike Pence The Establishment Has No Clothes - The American Spectator | USA News and Politics
Menu
Hither and Yon
The Establishment Has No Clothes
From Jerrold Nadler to John Roberts to the Fidel Castro admirer in line to be Joe Biden’s running mate, the only missing link is on the list of Jeffrey Epstein’s pals. 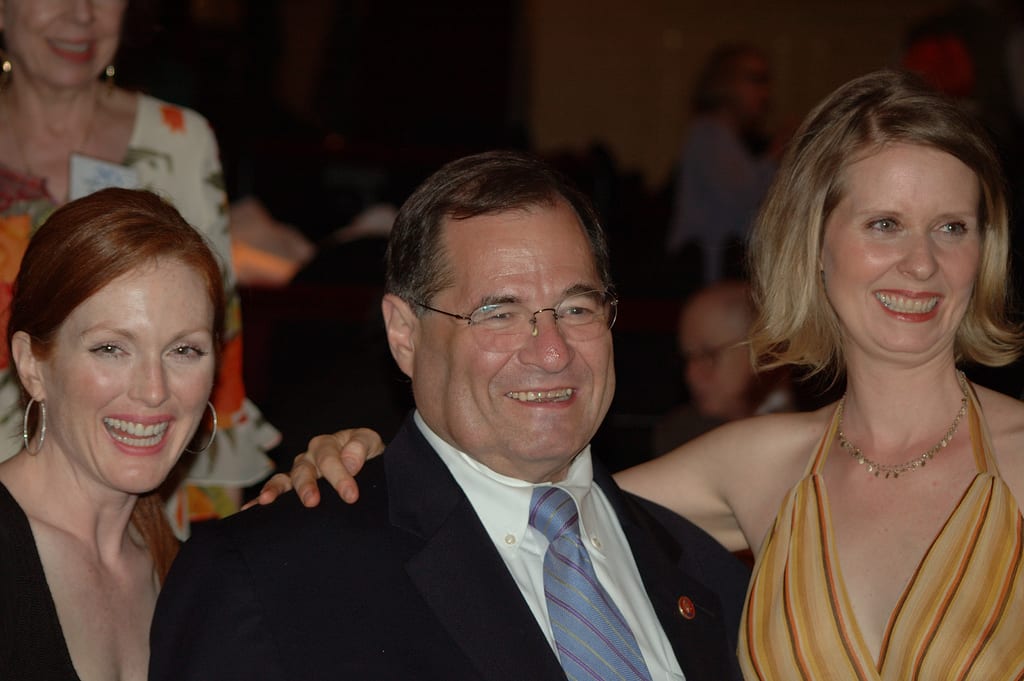 Here’s a scenario that, sadly, is a lot less implausible than it ought to be: let’s say there are 99 mathematicians who get together and agree that two plus two equals five.

And then let’s say there’s a guy from a construction crew who, in response, starts stacking bricks in little two-by-two piles.

Who has the better argument?

Perhaps it’s always been true that common sense wins out over the collective expertise of the elites. It’s probably never been more true than now.

America’s elite — the world’s elite, for that matter — is deeply corrupt. So much so that it’s becoming difficult to understand what makes them elite anymore.

We’re seeing it this week in spades.

Consider the House Judiciary Committee, which met Tuesday for a session with Attorney General William Barr. To call that appearance a mess would be too kind.

You would be safe in calling the chairman of the House Judiciary Committee a member of the elite. But there is nothing — nothing elite about Jerrold Nadler. He’s a physically repellent, intellectually absent, morally repugnant individual who gets worse with every public exposition. On Tuesday Nadler amazingly contended that what’s happening in Portland is not rioting, that the “demonstrators” there are “peaceful.”

Barr attempted to counter Nadler’s spit-take-inducing statements by outlining the litany of weapons those demonstrators have brought to their “mostly peaceful” protests and making the obvious observation that the federal agents engaged in a nightly melee with Antifa mobsters are defending federal property. Specifically, as in the case of Portland, the federal courthouse.

“Since when is it okay to try and burn down a federal court?” Barr asked, in a moment that pointed out the complete absurdity of summer 2020.

There has never been a political elite in this country so utterly debauched and devoid of merit. Consider that the Democrat Party has nominated a man with such diminished mental capacity that his handlers refuse to send him out to campaign. For the presidency of the United States of America. And the odds-on favorite for his vice-presidential choice is a woman whose relevant experience is a stint in the California Assembly and a safe majority-minority seat in Congress, someone who until this year was a complete political unknown (or, if you prefer, a nobody). She’s a Fidel Castro fan.

Nancy Pelosi is the Speaker of the House. Chuck Schumer is the Senate minority leader.

John Roberts is the Chief Justice of the United States Supreme Court, and a very significant portion of the public believes he is utterly compromised and subject to blackmail. His rulings quite commonly fuel that perception. Rumblings in various media organs that Roberts’ name appears on the Jeffrey Epstein flight logs only harden the notion that Roberts has been corrupted.

Speaking of Epstein, on Thursday the pleadings and discovery from Virginia Giuffre’s lawsuit will be made available to the public, and the documents therein are expected to destroy a large number of very prominent figures in finance, entertainment, and politics. By this point the disclosures can only be seen as “shocking, but not surprising.” Americans have become very used to the idea that the rich and famous in this country are utterly immoral, predatory beings suited more for gossip and outrage than virtue.

Virtue is, in fact, an antidote to fame in current American society. No one earns accolades for living an upright life. Mike Pence makes a rule that he won’t be seen alone with a female not his wife in order to quash any possible perception he might act in an untoward fashion or even be tempted to, and he’s ridiculed and calumnied for it. When Drew Brees stands up for the American flag he’s forced to apologize. When Bari Weiss makes a stand for diversity of opinion within the pages of the New York Times, including running an op-ed from a popular U.S. senator, she’s hounded out of her job.

Our elites are venal and toxic. They’re dishonest. They’re stupid.

Our academic elites embrace outright idiocy on a regular basis. They teach our brightest young adults that to recognize two sexes isn’t truth but bigotry. That America was founded on slavery and racism. That the world will end in 12 years because of cow farts. Employers rail against the character flaws and arrogant ignorance of their new hires straight out of the indoctrination factories. Parents are increasingly choosing trade schools for their kids rather than adding to the $1.6 trillion mountain of college debt academia has fleeced America into. Many of the richest men in America didn’t even graduate from college. Bill Gates and Mark Zuckerberg certainly didn’t.

Gates and Zuckerberg, and the rest of Big Tech, hardly conduct themselves in a manner one would term as elite. Gates engages in suspicious, if not nefarious, activity in the realm of vaccines; there are credible stories of his having corrupted the public health bureaucracies in this country and others.

Zuckerberg and his cohorts in social media are busy attempting to censor the very free speech that made them billionaires. So much so that on Monday and Tuesday a newly formed group of physicians called America’s Frontline Doctors held a two-day summit in Washington to bring public attention to the efficacy of hydroxychloroquine (HCQ) as a treatment for COVID-19 and to call for an end to economic lockdowns and mask mandates, and by Tuesday afternoon social media and Big Internet was actively engaged in scrubbing any evidence they had bothered to speak.

The doctors speaking out on behalf of HCQ were calumnied and insulted. Dr. Stella Immanuel, a Houston urgent care doctor and an immigrant from Cameroon with 30 years’ experience in pediatrics and emergency-room care and whose testimony included some 350 COVID-19 patients she’s successfully treated, was labeled a crank and a quack. Nothing Dr. Immanuel said was any different from what Dr. Harvey Risch, the head of epidemiology at Yale Medical School, has stated in multiple scholarly and journalistic articles about HCQ.

Is Harvey Risch a quack? Is he insane? Is Risch lying when he notes that the use of HCQ in Pará, a state in northern Brazil, deflated a major COVID-19 outbreak, while in Switzerland, a ban on HCQ resulted in a spike in the COVID death rate? Are these stories not true?

Zuckerberg, Jack Dorsey at Twitter, and the faceless goons at YouTube spiked America’s Frontline Doctors. Squarespace even took down their website. Practicing physicians are not allowed to discuss medicine because the non-doctors running Big Tech have decided to deplatform them.

That’s what America’s elite has devolved into.

There is nothing elite about them.

No civilization can survive this level of disconnect between its best virtues as understood by the majority of its people and the supposed cream of its society. What makes you elite in an intact society is your profession of those virtues, not your naked flouting of them.

And yet up is down. Black is white. The center cannot hold. It refuses to hold.

Soon comes the time when a society must throw off its corrupt elite and replace them with those more worthy. That time is coming in America. How painful the transition will be, though, is entirely unknown.