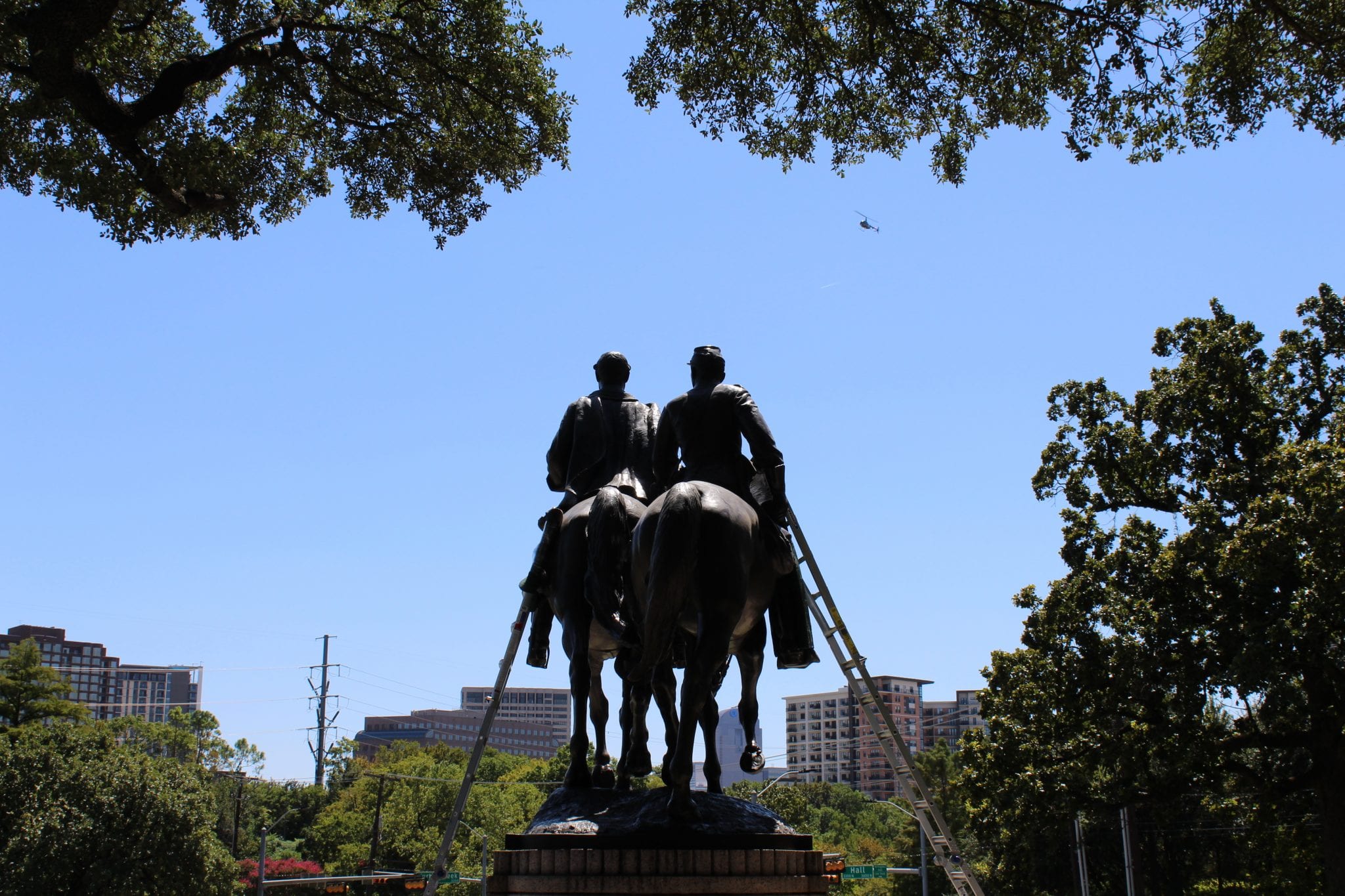 During the walkup to Memorial Day, with its evocations of respect for fallen warriors, hyper-charged Dallas, Texas, found time to stick out a very official tongue at, you see, the wrong kind of fallen warriors: the Confederate kind.

The business of establishment America, on the urging of the political left, has become that of saying, oh, ’scuse us for not living up to ideals we didn’t know were ideals ’til you kind progressives kindly wised us up.

Dallas city government — once fairly accused of patient commitment to reasoned dialogue — bellied up enthusiastically: voting to sell, and bar (unconstitutionally) from display anywhere in the city, a distinguished equestrian statue of Gen. Robert E. Lee and a symbolic aide, removed in 2017 from the city’s Lee Park and hidden away in a rented Air Force hangar due to…

Ah. There’s the question: due to what? How come we’re spitting and clawing, not just at each other but at folks long dead? What are we trying to do here? And what’s to gain?

Ask the progressives and their puissant advocates in Dallas city government, as well as the local media — conspicuously the very “woke” Dallas Morning News, established, ironically, on the instance of a Confederate colonel!

One gathers it’s a case of, boy, watch us stomp on ancient allegiances that hinder, as one News editorial put it, the ideal of “moving forward to a more positive future.” Whatever a more positive future might look like: construed, as it has to be, as capitulation to whoever speaks in the loudest, most insistent tones.

One way to look at things is that, by dissing the Confederates, pulling down their monuments, denouncing the great-souled Lee as a traitor to his country, we’re repudiating slavery. Yeah, sure. As if slavery (an acknowledged evil, if, at that, an ancient one) were by itself enough to explain a ruinous war costing 750,000 lives. History and human motivation are generally too complex to be grasped by activists whose current fallback position can be characterized as “I’m right and you’re evil. (Not to mention stupid.)”

Back to the Dallas establishment’s capitulation to woke-ness (meaning the embrace of group identity as the operative political mission of our time). It’s not just Marse Robert who gets the heave-ho. Dallas is concurrently trying to pull down Confederate statuary adorning — a word I don’t think the Dallas News would employ in this context — a downtown grave! Get those racist images off city property! Such is the city establishment’s, ah, judgment in the matter. Others might apply a word other than “judgment,” with its connotations of reasoned discourse and fair play for all. Is it any wonder Donald Trump — a blunt instrument with hands and teeth — enjoys the tolerance and even fervent backing he more than occasionally puts to substandard use?

The Confederate Crisis, so to call it — in once-normal and good-hearted Dallas, as in many other venues — is one more sign of what resembles, increasingly, the Great American Crack-Up. We’ve lost the knack, it would seem, for putting up with each other; for entertaining ideas different from our own but possibly useful if we think them through.

If we think them through! What a notion — you mean, think? Put aside insults and claims of unique moral righteousness? Marshal evidence instead of accusations? Take into account a viewpoint contrary to the orthodoxy of place and time? Why, that would be… downright conciliatory. People might come together in a common cause. Surely we can’t put up with that, can we? Not when victory, rather than peace, is the great objective: when power over others — the essence of the master-slave relationship, come to think of it — is the end for which we strive.

Having expended 750,000 lives, the soldiers of North and South managed in the end — they thought it was the end — to put it all behind them. As the Civil War’s unsurpassed chronicler, Shelby Foote, used to note, Southerners admitted it was better that the North had won. The North, for its part, acknowledged that Southerners had fought bravely.

Memorial Days, like the one just past, come and go. Our need for them — obviously — never dies.