Maybe not, but even some mainstream scientists say temperatures are going down and are likely to stay there for decades.  Not quite the runaway warming that we were threatened with. (Or promised, as I thought of it.  As I view the snow that remains piled up in my yard more than three weeks after the pre-Christmas storm, I am praying for global warming!)

The bitter winter afflicting much of the Northern Hemisphere is only the start of a global trend towards cooler weather that is likely to last for 20 or 30 years, say some of the world’s most eminent climate scientists.

Their predictions – based on an analysis of natural cycles in water temperatures in the Pacific and Atlantic oceans – challenge some of the global warming orthodoxy’s most deeply cherished beliefs, such as the claim that the North Pole will be free of ice in
summer by 2013.

According to the US National Snow and Ice Data Centre in Colorado, Arctic summer sea ice has increased by 409,000 square miles, or 26 per cent, since 2007 – and even the most committed global warming activists do not dispute this. 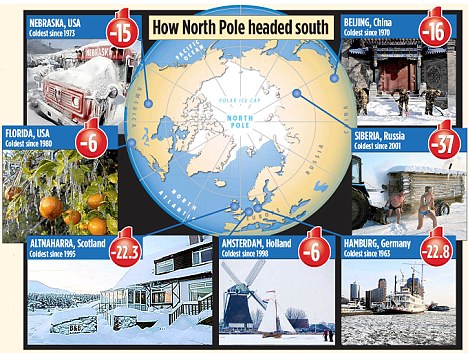 The scientists’ predictions also undermine the standard climate computer models, which assert that the warming of the Earth since 1900 has been driven solely by man-made greenhouse gas emissions and will continue as long as carbon dioxide levels rise.

They say that their research shows that much of the warming was caused by oceanic cycles when they were in a ‘warm mode’ as opposed to the present ‘cold mode’.

This challenge to the widespread view that the planet is on the brink of an irreversible catastrophe is all the greater because the scientists could never be described as global warming ‘deniers’ or sceptics.

It must be frustrating for the alarmists when the temperatures don’t cooperate with their theories.