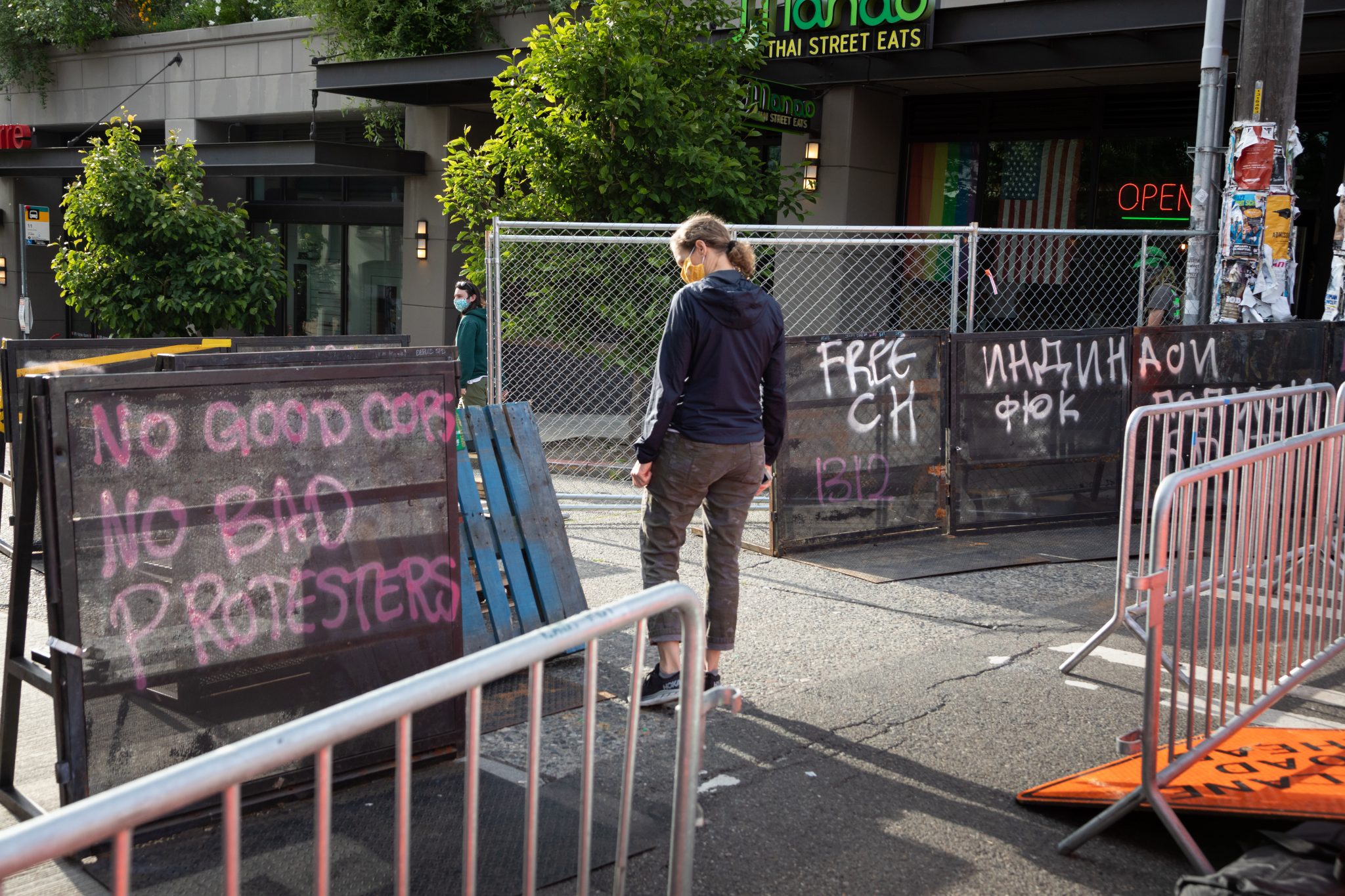 For almost two weeks now, protesters have been trying to create a parallel country in Seattle’s Capitol Hill area, called CHAZ/CHOP — first the Capitol Hill Autonomous Zone, since renamed the Capitol Hill Occupied Protest. The revolutionaries claim they crave justice for those who have suffered from police brutality. They want people to feel safe and protected.

Careless of people’s lives and safety, the revolutionaries would rather conceal real facts for the sake of the ideals they are fighting for than act in good faith.

Unless those people live or operate their businesses in the area, which they have expropriated. In this case, it is not so crucial. If the end goal is the eradication of violence, then why do the protesters themselves abuse residents of the occupied area? This abuse started almost immediately: On June 14, one of CHAZ/CHOP inhabitants broke into the Car Tender, a local business, and set it on fire. The same week, masked Antifa partisans choked a Christian preacher and dragged him through the streets. In another case, a man falsely accused of stealing got almost beaten with a bat by a CHAZ/CHOP self-appointed security member.

Last weekend, the situation considerably worsened: on Saturday night two men suffered gunshots — one died immediately and the other one still remains in the hospital with life-threatening injuries. Sunday night witnesses reported hearing multiple rounds of gunfire in the protest zone, one person was wounded in the arm.

Seeing how cancel culture is ruining more and more people’s lives, local business owners are too scared to publicly condemn CHAZ/CHOP inhabitants’ violent behavior. “Yes, I would like to get back to work,” said Karyn Schwartz, the owner of SugarPill, a small apothecary in the area. “Yes, this has all taken a huge toll on SugarPill, and everyone else in the neighborhood. We are not doing OK, most of us, as businesses.” Some residents whose houses and apartments are located inside the protest zone say they feel like hostages in their own neighborhood.

The reality is that now there is no one there to protect their rights. For example, police never showed up to a call made by Russell Kimble, whose auto shop was set on fire and burglarized on June 14. Even in a critical situation, scared of that “the shooting on Saturday night is going to take away from the message” the protesters prevented officers safe access to the victims.

Careless of people’s lives and safety, the revolutionaries would rather conceal real facts for the sake of the ideals they are fighting for than act in good faith. In a statement on the latest events in CHAZ/CHOP, Seattle City Councilwoman Kshama Sawant said that the violence “may have been a right-wing attack” and blamed Trump and “conservative and corporate media outlets” for depicting the protest zone as chaotic. To avoid the “misinterpretation of facts,” the protesters decided to eliminate the undesirable elements from the area. A local reporter was assaulted because of her connection to Fox News. “When I was all set to do a live hit on Tucker Carlson Tonight from CHAZ, we had to move locations because the cameraman was getting harassed,” said a National Review reporter. Scriberr’s co-founder and field reporter, Kalen D’Almeida, said that in an attempt to escape the angry mob he ran outside of the zone’s barriers. The agitators did not want to freely let him go: a Toyota Camry with tinted windows chased Kalen and tried to make him give up his recording equipment and report to a “medical tent for interrogation.” On Monday, the journalist released footage that ends seconds before his assault.

How is it even legal to seize the land and make your own rules as to who is welcome and who is not? Short answer: It isn’t. The standard the protesters put forward has nothing to do with the rule of law or justice. Since when has “last come, first served” become a desirable model of life? A society where the one who shows up the last but nevertheless has the best claim of resources is inherently prone to violence. It will never be able to sustain itself in the long run. No one wants to live in fear of someone coming and expropriating their private property from them by any means other than from concessional exchange.

The protesters who decided to create a heaven on Earth have seemingly forgotten their physical location: they are still on the territory of the United States, occupying U.S. public property, which belongs to all our fellow nationals. To claim land, it needs to be uninhabited. Expropriating six blocks in the heart of Seattle is not the same as claiming rights to an unowned territory. There is a categorical difference between the open frontier and public property. Public property is the result of government taxation of originally private property. Every citizen has a right to use public amenities and freely move in public space.

It is not only hypocritical to silence people who you disagree with — especially when you emphasize openness and freedom — but rather illegal to brutally oppose dissenting voices by removing conservative journalists and activists from the perimeter and choking preachers. CHAZ/CHOP residents have no legal right to set any borders and decide who gets to come in and whom they will violently kick out.

What they are doing is a violation of U.S. citizens’ freedoms and should not be tolerated by the local authorities. It is a perfect recipe for a conflict to prioritize one group of people over the rest of the Seattle residents for the purpose of the de-escalation of the clash between the revolutionaries and the police force.

The protesters may believe they can legitimately expropriate land to conduct this experiment with the creation of a new perfect society. But they at least have to understand that CHAZ/CHOP is not autonomous. They are still fully relying on Seattle gas and electric stations, food and water supply coming from the outside of the self-proclaimed independent zone, and other institutions that are necessary for a healthy society. They do not have their own hospitals that can take care of the victims of the shootings, they are unable to provide justice for those who suffered violent crime, and they certainly cannot keep the area safe for all its residents.

CHAZ/CHOP is not its own autonomous republic, it does not even remotely remind of any other independent, self-sufficient commune that the world has ever seen. CHAZ/CHOP is just a leftist experiment that Seattle officials have allowed to run its course until the protesters cross the line.

On June 11, President Trump urged Mayor Jenny Durkan and Gov. Jay Inslee to “take back their city NOW.” “If you don’t do it, I will. This is not a game,” he added. If a week ago no one took Trump’s warnings seriously, then after a series of shootings, Durkan said on Monday, “It’s time for people to go home, it is time for us to restore Cal Anderson and Capitol Hill so it can be a vibrant part of the community. The impacts on the businesses and residents and the community are now too much.” The process of returning the area back to its normal will be done in a phased way. This, however, is already a good start.