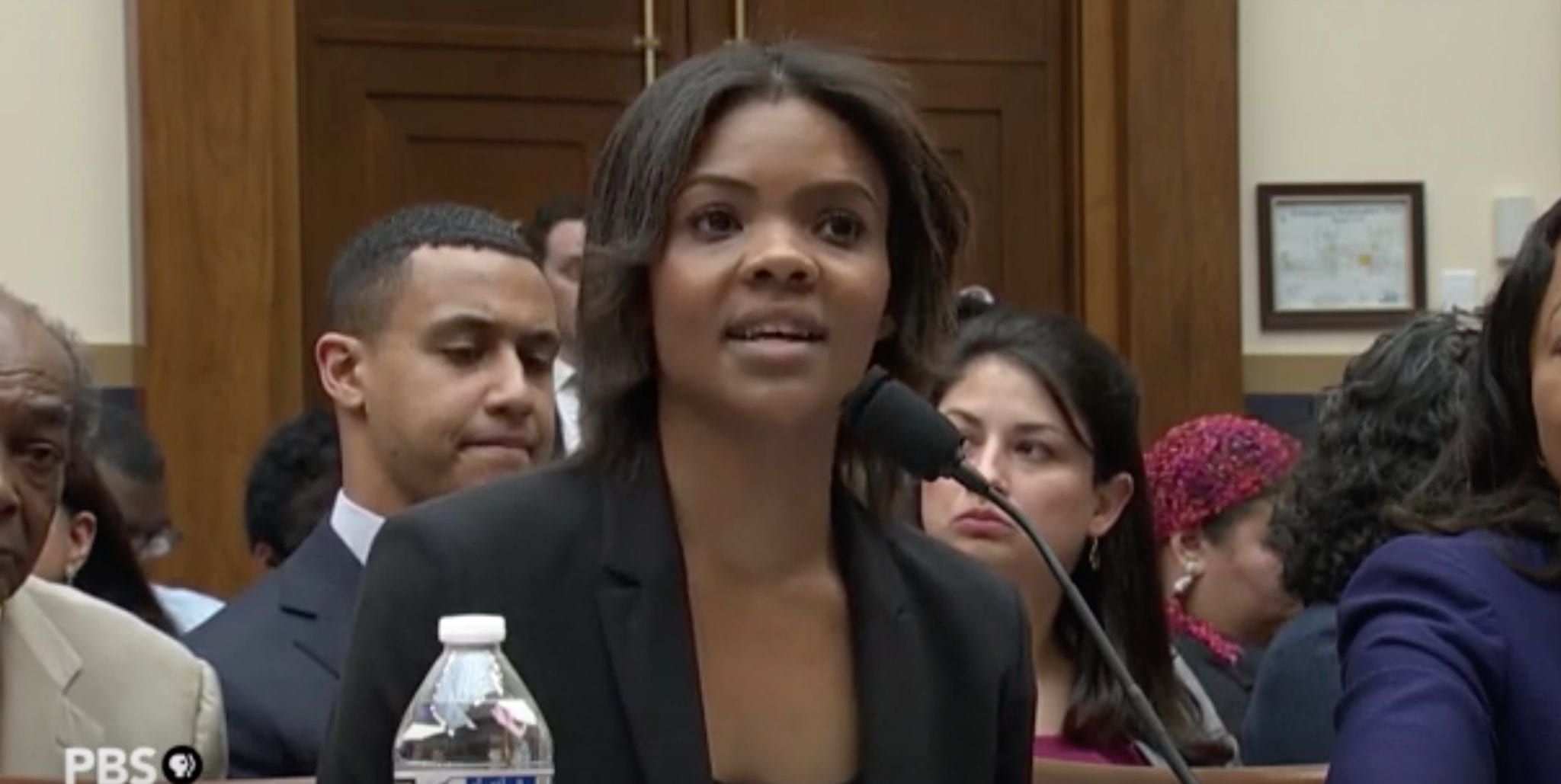 If you want to know why the Democrats are frightened of Candace Owens, watch the video of her Tuesday morning testimony before the House Judiciary Committee. For example, early in the proceedings, Owens chastised Chairman Jerrold Nadler for misrepresenting her biography: “You reduced it to one sentence, calling me a conservative activist. It wasn’t what I submitted to your office last night and I think that you opened with anti-black bias.” Having demonstrated that she is no shrinking violet, Owens debunked the ostensible purpose of the hearing — that it was convened to examine white nationalist hate crimes:

The hearing today is not about “white nationalism” or “hate crimes.” It’s about fear-mongering, power and control. It’s a preview of the 2020 Democrat election strategy… what they want to say is that brown people need to be scared which seems to be the narrative that we hear every four years right ahead of a presidential election.… White supremacy, racism, white nationalism, words that once held real meaning, have now become nothing more than election strategies.

Owens highlighted her point by describing genuine problems that beset the black community: The failure of the public school systems to teach black children to read and their equally appalling failure to teach minority students basic math skills. She went on to point out that the single motherhood rate in the black community has skyrocketed from 23 percent in the 1960s to 74 percent today, and that there are more black babies aborted than born alive in large cities like New York. She then dropped the hammer as follows: “My point is that white nationalism did not do any of those things that I just brought up. Democrat policies did.”

She continued by heaping scorn on the statistics the Democrats used to support their claims about white nationalist violence. “What they won’t tell you is that they have simply changed the data set by widening the definition of hate crimes… they are manipulating statistics.” She’s right, but it gets even worse. Breitbart notes that “Nadler used a report in his opening remarks on Tuesday at a House Judiciary Committee hearing on hate crimes and the rise of white nationalism in the Donald Trump era that highlighted crimes that took place from 2008 to 2016, when Barack Obama was president.” Owens continued thus:

If they actually were concerned about white nationalism, they would be holding hearings on Antifa, a far left violent white gang, who determined one day in Philadelphia last August that I, a black woman, was not fit to sit in a restaurant. They chased me out, yelled “race traitor” to a group of black and Hispanic police officers who formed a line to protect me from their ongoing assaults. They threw water at me. They threw eggs at me, and the leftist media remain silent on it.

And this is by no means the only feature of Owens’ biography that the media have neglected to report. She is hardly a typical “conservative activist.” First, unlike the absurd Jussie Smollett, she has actually been the victim of a genuine hate crime. Moreover, she is a registered Democrat. However, her strong support for President Trump precludes fair coverage by the legacy media. That heresy inspired them to parrot the absurd BuzzFeed “news” story claiming that she is a Nazi apologist. Inevitably, California Democrat Ted Lieu raised this absurd claim Tuesday to smear Owens. She incinerated him:

I think it’s pretty apparent that Mr. Lieu believes that black people are stupid, assuming that they will not pursue the full two-hour clip and he purposely extracted … the question that was asked of me. He’s trying to present this as if I were launching a defense of Hitler …That was unbelievably dishonest and that he did not allow me to respond to it is worrisome [GOP Rep. Reschenthaler allowed her to use his time to do so] … I’m deeply offended by the insinuation.

As Owens points out, any objective viewer of the entire video from which Congressman Lieu’s smear was gleaned will see that her point was that “nationalism” and “Nazism” aren’t synonyms. This didn’t matter to Nadler and Lieu because their only goal was to discredit her. By the time Lieu leveled his despicable charge, it was clear that Owens was kicking their ample posteriors. As former “Racial Justice Director” for Bernie Sanders, Tezlyn Figaro, tweeted: “Democrats on the committee were WEAK. She fiercely defended her cause & Dems just sat there & took it like a child being chastised by Mommy.”

And, if Nadler and the rest of the Democrats had enough sense to listen to “Mommy,” they would hear the death knell of their Party. Owens is the founder of Blexit, the launch of which she described Tuesday morning: “When I became educated about the issues and stopped reacting emotionally which is what the left wants us to do… I began to examine the facts and look at some of the narratives they were spinning.” She obviously found the latter wanting. And she has been traveling around the nation and beyond describing her epiphany to blacks whose faith in the Democrats has been gradually waning for some time.

Blexit, combined with the #WalkAway movement, has the power to destroy the Democrats. In 2016, it was low black turnout in states like Ohio, Michigan, and Wisconsin that cost Hillary Clinton the election. So the outrageous behavior of Nadler, Lieu, and their accomplices on the House Judiciary Committee was worse than a crime, to coin a phrase, it was a blunder. When black voters, who never see these parasites until a few days before some crucial election, watch Tuesday’s videos of Candace Owens taking these characters to school, they will begin to wonder what the Democrats have done for them lately.