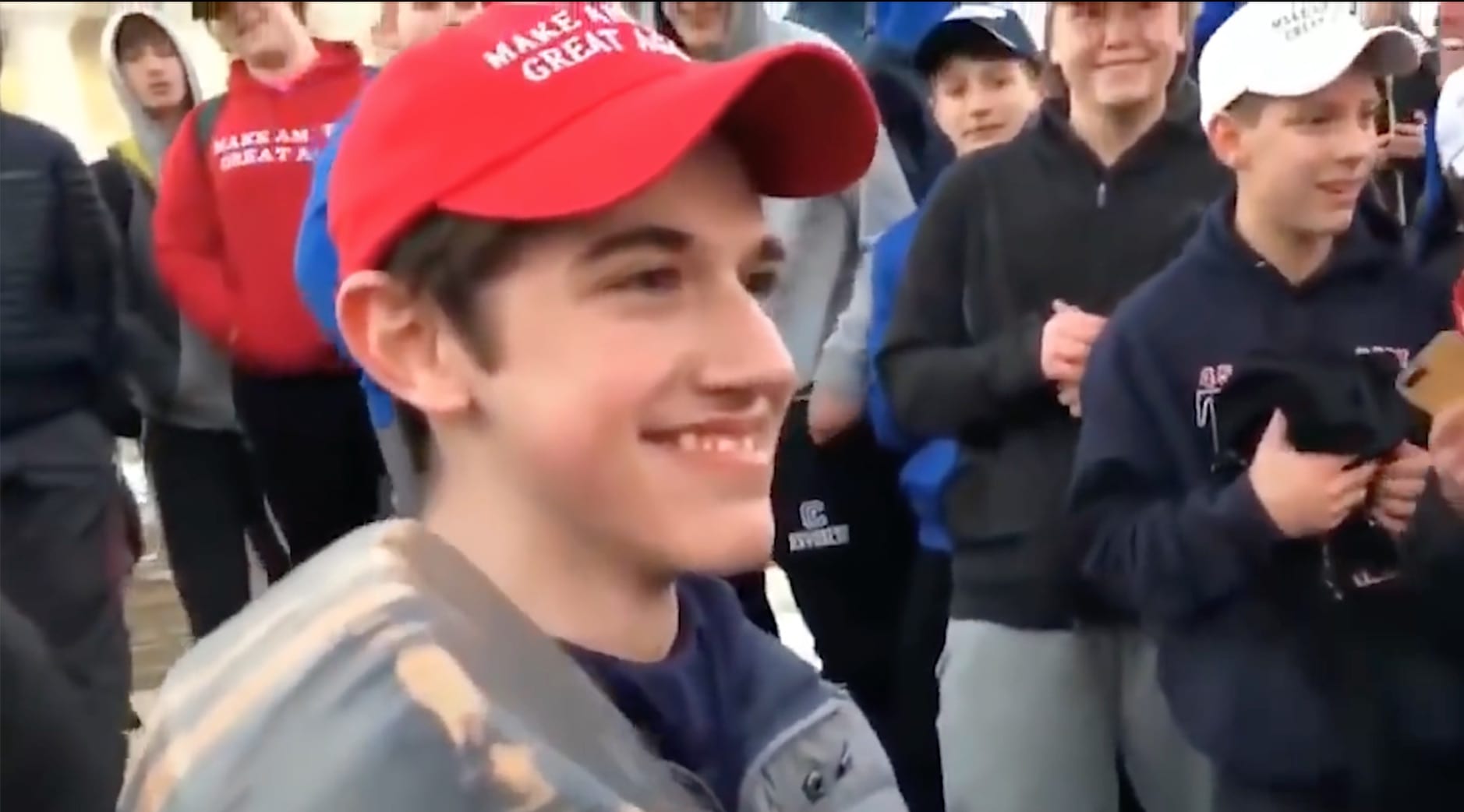 Nick Sandmann is back in the news, literally with a vengeance. If there is anyone in the galaxy who doesn’t recognize the name, this is the high school teen viciously maligned by the media after a leftwing activist with a film crew attempted to provoke a confrontation with him as he waited for a bus near the Lincoln Memorial. Having committed the crimes of wearing a red MAGA cap and smiling, Sandmann was vilified by the media as a smug beneficiary of “white privilege” who had bullied a Native American veteran. This turned out to be a lie, of course.

Consequently, Sandmann’s parents are suing the Washington Post for $250 million pursuant to its participation in a “modern-day form of McCarthyism” and enthusiastically joining “a mainstream and social media mob of bullies which attacked, vilified, and threatened Nicholas Sandmann, an innocent secondary school child.” The pretext for this outrage was a deceptively edited video suggesting that Sandmann was the aggressor in the “confrontation” with alleged Vietnam veteran Nathan Phillips. The full video revealed that the former was, in fact, the victim.

This incident enraged a public whose trust in the “news” media is already at an all time low and alarmed many honest journalists and scholars who fear that the increasing number of such abuses by the press will cause an overreaction by the courts resulting in undesirable restrictions on the First Amendment. Indeed, confirming the validity of such concerns, Supreme Court Justice Clarence Thomas just wrote a concurring opinion in which he suggested that NYT v. Sullivan, a landmark First Amendment ruling involving defamation cases, should be revisited:

[NYT v. Sullivan] and the Court’s decisions extending it were policy-driven decisions masquerading as constitutional law.… We did not begin meddling in this area until 1964, nearly 175 years after the First Amendment was ratified. The States are perfectly capable of striking an acceptable balance between encouraging robust public discourse and providing a meaningful remedy for reputational harm. We should reconsider our jurisprudence in this area.

NYT v. Sullivan is regarded as sacrosanct by the media. The general gist of the ruling is that news organizations can’t be sued for defaming public figures unless they act with “actual malice.”To clear that bar, an outlet must be shown to have published a claim about a public figure knowing that it was untrue or with reckless disregard concerning its accuracy. A good recent example involves a false story about Melania Trump published by the Daily Mail in the U.S. The First Lady sued whereupon that “news” publication was forced to pay $2.9 million in damages.

The Sandmann case is far worse. Nick Sandmann is a 16-year-old high school kid. There isn’t a lawyer in the land who will be able to convince any court that he was a public figure before he found himself under assault by the media and the Twitter mob. Thus, the Post will face this lawsuit with no ability to invoke a basic principle elucidated in NYT v. Sullivan. Second, the Post ran with the false narrative with no attempt to verify its accuracy. Its editors behaved as if they were actively striving to meet the reckless disregard requirement. As the complaint phrases it:

The Post published its False and Defamatory Accusations negligently and with actual knowledge of falsity or a reckless disregard for the truth.… As one of the world’s leading news outlets, the Post knew but ignored the importance of verifying damaging, and in this case, incendiary accusations … The negligence and actual malice of the Post is demonstrated by its utter and knowing disregard for the truth available in the complete video of the January 18 incident…

The lead attorney for Sandmann, L. Lin Wood, is no beginner. The Washington Post itself has done a profile describing him as a “trial attorney who has carved out a successful career representing the high-profile and falsely accused.” Among the clients he successfully represented against the media was Richard Jewell, who was ruined by false reports naming him as a suspect in the 1996 Olympic bombing. CNN, NBC, and the Atlanta Journal Constitution paid large settlements in that case. Fifty defendants have been identified in this episode.

The list of news organizations Wood is likely to go after includes the New York Times, CNN, NPR, GQ, the Atlantic, and the Hill. Possible defendants also include individual “journalists” who participated in the slander of Sandmann. They include David Brooks, Andrea Mitchell, Chuck Todd, Kurt Eichenwald, Michelle Boorstein, and Maggie Haberman. How will lawsuits against these outlets and journalists save the First Amendment? The news business is a business. And, as Mark Hemingway points out in the Federalist, bad journalism hurts the bottom line:

CNN fired three journalists in 2017 for their handling of a story on Trump confidant Anthony Scaramucci — one of very few times where a major journalistic error covering the Trump administration met actual newsroom punishment — CNN doesn’t appear to have been motivated to action in order to protect their integrity. The network was staring down the barrel of a $100 million lawsuit as the result of the story. The message the media should be receiving right now couldn’t be clearer.

In other words, there’s a pretty straightforward way to improve the reputation of reporters, fend off accusations of fake news, and keep the courts from reassessing important constitutional precedents protecting freedom of the press — journalists need to start fulfilling the mission assigned to them by the authors of the First Amendment. The role of the news media in a free society is to keep all politicians honest. “The only security for all is in a free press,” as Jefferson put it. But the press isn’t “free” if a journalist may only criticize one party and remain employed.

The tsunami of lawsuits that is about to hit the press pursuant to the Sandmann disgrace will shake up the news industry. A lot of outlets will lose a lot of money, and a lot of journalists will lose their jobs. This is good news for those of us who believe the media have misused their constitutional protections for partisan purposes. But it is also good news for the nation if the survivors of the flood remember what a unique and precious thing we have in the First Amendment. If a 16-year-old from Kentucky gets it, maybe there’s hope for the editors of the Washington Post.