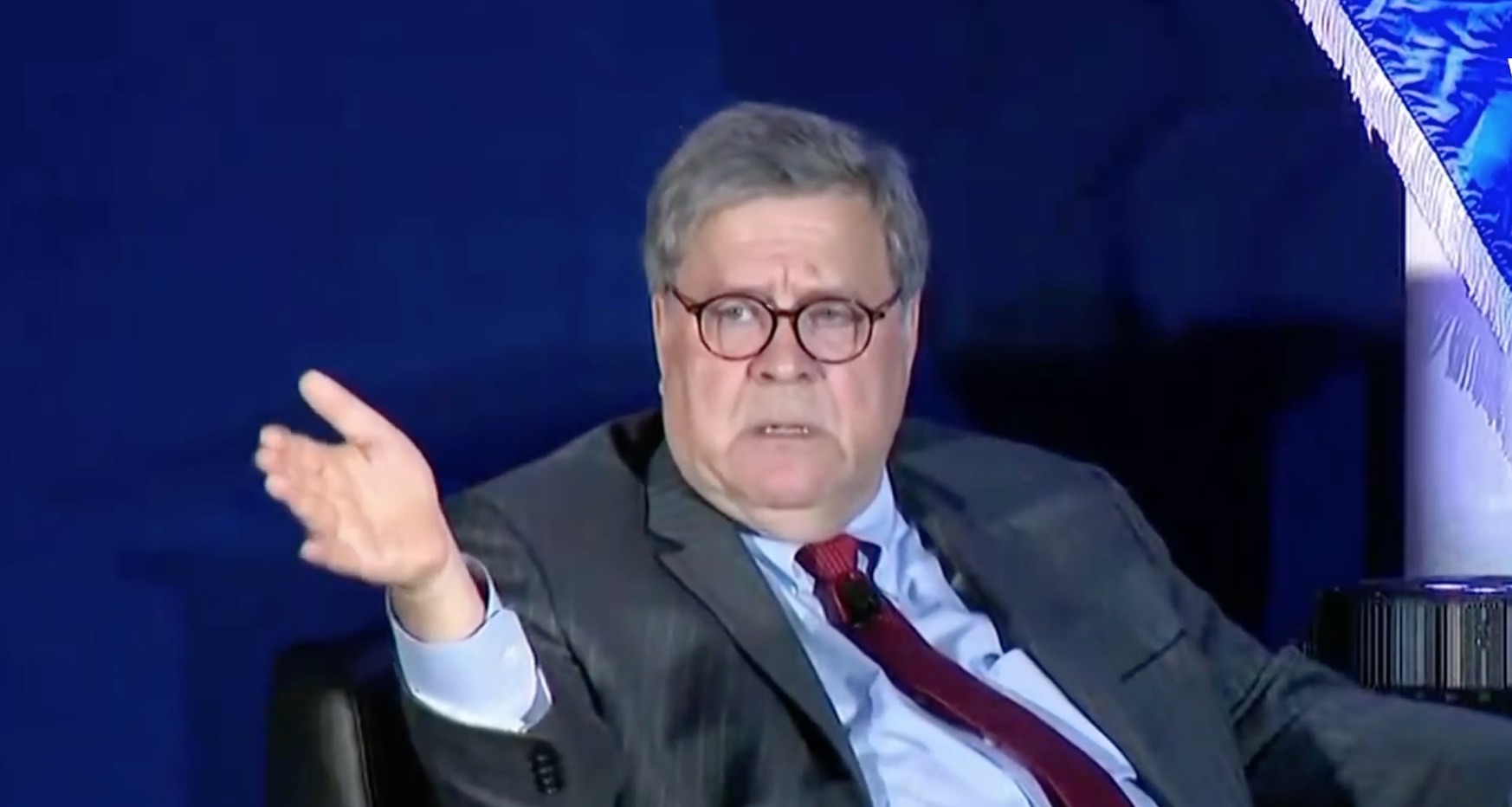 Mental circuits trip and temperament fuses blow. The attorney general, bucking the behavior of attorneys generally, displays all the emotion of a mortician, approaches an audience with the calm detachment of a psychiatrist, and speaks in the reading-room volume of a librarian. His bearing rarely proves contagious.

“Most deaths in the inner city of young black males below the age of 44 — the leading cause of death is being shot by another black person. And that’s crime,” Barr said.

“The person in the white coat is not the grand seer who can come up with the right decision for society. A free people makes its decision through its elected representatives,” Barr noted in a speech Wednesday.

“Putting a national lockdown, stay at home orders, is like house arrest,” Barr explained. “Other than slavery, which was a different kind of restraint, this is the greatest intrusion on civil liberties in American history.” He continued, “Most of the governors … treat free citizens as babies that can’t take responsibility for themselves and others.”

A dumbstruck Don Lemon responded, “I don’t know what to say.” Jon Meacham, a partisan journalist called a historian by other partisan journalists, called Barr’s coronavirus comments “incendiary hyperbole designed to feed a sense of paranoia and fear.” Sanjay Gupta’s head, in a medical first, nearly exploded on live television.

If the government forced CNN to shutter after Chris Cuomo and Brooke Baldwin contracted COVID-19, then the network’s talking heads might feel more sympathy for the tens of millions Americans who lost the ability to earn a living because of orders to close some businesses but not others, to rob children of their educations by mandated hooky, to forbid Americans from attending religious services under pain of arrest, and to restrict travel through fines for out-of-state travelers, bans on flying to various countries, and even ankle bracelets in extreme cases for uninfected people who nevertheless lived under the same roof with the infected. The authorities dispatched drones to patrol beaches, workers to remove hoops from backboards, and speedboats to arrest ocean paddleboarders.

All of this amounts to a curtailment of civil rights witnessed in our lifetimes only in dystopian novels. Who, really, fed “a sense of paranoia and fear”?

Barr did not confine his remarks to coronavirus. He tackled the other two massive issues of 2020 — Black Lives Matter and the Deep State’s failed attempt to remove the president — to make his speech the most talked-about address in recent memory.

“Who can quarrel with the proposition black lives matter?” the attorney general asked. “But they are not interested in black lives. They are interested in props — a small number of blacks who are killed by police during conflict with police, usually less than a dozen a year, who they can use as props to achieve a much broader political agenda.” He added, “Most deaths in the inner city of young black males below the age of 44 — the leading cause of death is being shot by another black person. And that’s crime.”

The idea that crime threatens black lives exponentially more than crime fighters similarly outraged those in the outrage business. The detractors fumed over the occasion for the speech, Constitution Day, whose existence journalists treated as a scoop, and noted that “a conservative, privately funded university in Michigan,” Hillsdale College, sponsored the address.

The bureaucratic cabal to undermine Donald Trump — the self-styled “resistance” — makes for the third massive story, which culminated in the third impeachment of a president in American history in January even if our memories do not extend so far back in this century of a year, of 2020 tackled by the attorney general Wednesday.

“What do you mean by interfere?” a stone-faced Barr asked regarding criticisms of his intervention in cases involving Justice Department subordinates. “Under the law all prosecutorial power is vested in the attorney general. These people are agents of the attorney general. As I say, FBI agents, whose agent do you think you are?”

In a year when criminals became liberators and lockdowns freedom, the notion that underlings direct bosses to do their bidding seemed sensible to some if not to Bill Barr.

“Name one successful organization where the lowest level employees’ decisions are deemed sacrosanct,” Barr challenged his audience. “There aren’t any. Letting the most junior members set the agenda might be a good philosophy for a Montessori preschool, but it’s no way to run a federal agency.”

The stung swampthings struck back.

Donald Ayer, an enthusiast of bowties nearly as much as of the adverb “utterly,” compared his Bush I administration successor as deputy attorney general to Joseph Goebbels and called it Barr’s “mission” to install Donald Trump as an autocrat, which left CNN interviewer John King, not in a challenging mood whenever the administration’s critics come on his program, to merely observe that Ayer used “very strong words.”

The Associated Press characterized Barr’s speech as “a striking, and unusual, rebuke of the thousands of prosecutors who do the daily work of assembling criminal cases across the country.” The AP continued, “Rejecting the notion that prosecutors should have final say in cases that they bring, Barr described them instead as part of the ‘permanent bureaucracy’ and suggested they need to be supervised, and even reined in, by politically appointed leaders accountable to the president and Congress.”

People who traffic in lies react to truth the same way Linda Blair responded to holy water. The civil rights crackdowns in the wake of coronavirus felt by Americans as real and not abstraction, the assertion that criminals rather than cops pose the greatest threat to young black men, and the belief that hierarchies work not with the bottom ordering around the top strikes most Americans as, to borrow a word from Barr’s jealous predecessor as deputy attorney general, utterly uncontroversial. The hysterical reaction to Barr’s speech shows not that he told lies but that liars heard truths.

Aside from the truth, the consistent chord Barr struck involves process, a concept foreign to ends-justify-the-means fanatics. The people deputize their representatives and not strangers in lab coats to make rules, cops and not protesters to enforce rules, and the attorney general appointed by the president and not faceless bureaucrats to run the Department of Justice.

Bill Barr de-cleated the ongoing end-around on all this. The Left cries “cheap shot” to his clean hit.