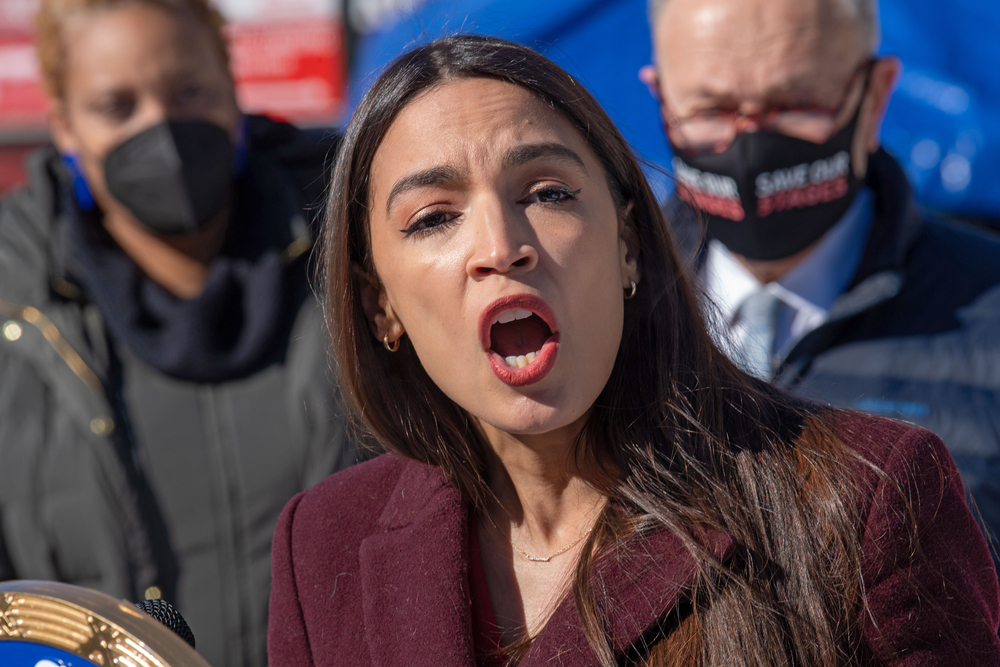 If an office pool were held today, the question being to identify one thing Joe Biden has done since fetching up at 1600 that AOC would not have done had she been the winner November 3 last, that pool would not produce a winner. Because there’s not a single thing that Biden — whom the mainstream media insist on describing as a cuddly, dog-loving fuzzball of a moderate — has done that the former Bronx barista, now leftist heartthrob, would not find simpatico. As we moderates say, Vive la révolution!

I’m sure Saul Alinsky and Old Scratch are high-fiving over what their favorite moderate president has accomplished in his brief tenure. And it is indeed truly impressive. In less than three months, Biden has managed to erase the United States’ southern border in order to accelerate the northward flow of undocumented Democrats. He’s having more success than he should in pushing for the higher taxes and onerous regulations that held down the economy when he was Barack Obama’s dogsbody, both of which Biden’s predecessor lowered, thereby causing the economy to take off. Biden has reinstated Obama’s invertebrate foreign policy, giving the world’s bad guys the rope they need, and he’s pledged to spend trillions we don’t have in order to pursue the fool’s errand of carbon-free energy (aka very little energy, and at mini-bar prices). He’s blessed the corrupt HR 1, which if the Senate falls for it would federalize all elections, installing voting rules so lax as to hang a “STEAL ME!” sign on all future elections.

The cherry on top of the sundae is Biden foisting critical race theory onto federal employees, including the military, which Democrats seem determined to declaw. Critical race theory informs us that all white people, no matter how decently they’ve treated people of all complexions, are closet Ku-Kluxers. I can sum up critical race theory in two short sentences — one if I’m allowed a semi-colon. To wit: Black people good; white people bad. That’s it. And the Democrat Party, with few exceptions, seems to be wedded to this absurd and thoroughly racist notion, starting with the unifier-in-chief in the White House. (To be fair to Biden, he has managed to unify far-left Democrats with very-far-left Democrats.)

Biden’s latest step on the far-left express is his announcement of a bipartisan commission to study potential changes to the Supreme Court, including the obvious goal of Democrats to expand its membership. The 36-member commission would have 180 days to study the court and issue a report. Then moderate Joe would decide whether to try to pack the court. Of course, one could not be considered a cynic or conspiracy theorist if one suspects Joe has known all along that he and his party want to expand the court to fill it with justices amenable to their leftist agenda. This commission, like all commissions, is just cover for the politician to do what the politician wanted to do all along.

The reasoning behind this one is as thin as the reasoning behind everything Democrats have done since regaining power. Biden told 60 Minutes, part of the DNC’s attack arm, that he wants this new commission to “come back to me with recommendations as to how to reform the court system because it’s getting out of whack … and it’s not about court-packing.”

Yes, it is. It’s about court-packing and nothing else. Joe knows this. Just as he knows the new Georgia voting law has nothing to do with Jim Crow and that our southern border is not secure.

Of course, to Biden and Democrat officials and activists the Supreme Court is only out of whack because, thanks to former President Trump, it now carries a 6-3 conservative majority. Back when the ideology leaned the other way the court was very comfortably in whack for Biden & Associates. Expanding the court would allow Biden to appoint justices who would rule that the Constitution is unconstitutional when it gets in the way of the Left’s agenda.

After last November’s election, which, while it excised Donald Trump from the body politic, was in no way a mandate for far-left government, there was some hope that Biden would loiter somewhere around center-left, bobbing and weaving around AOC, Bernie Sanders, and the party’s other full-goose left Bozos. Alas, it was not to be. He’s been all hard left all the time since the afternoon of January 20.

Biden has never had a thought-out political or cultural philosophy. On the recurring political issues or on anything else, come to that. He’s held more positions than can be found in the Kama Sutra. He’s moved left to right and right to left faster than the NFL’s best middle linebacker. He’s a windbag and a wind-sock, fashioning his principles on polls, focus groups, and the last person he talked to. He’s as hollow as a tennis ball and has no consistent conviction beyond a lust for public office in lieu of legitimate work. He’s satisfied this ambition since shortly after sneaking through law school in Delaware — but at a great cost to the republic he claims to love.

AOC is only 31 years old (going on 14), so she could not run for president in 2020. That old wet blanket of a Constitution insists that candidates for our highest office be at least 35 years old. She didn’t have to run, though. She has her surrogate safely working to advance the revolution from the Oval Office. But not to worry. He’s just a cuddly, dog-loving fuzz-ball of a moderate.