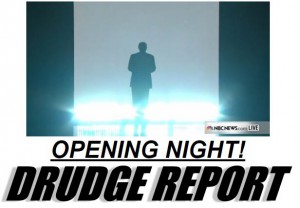 Matt Drudge has revolutionized the news industry in the past 20 years, and an interesting article by Oliver Darcy at Business Insider focuses on disgruntled Republicans who seem to blame Drudge for Donald Trump winning the GOP presidential nomination. Darcy quotes consultant Rick Wilson:

“Matt’s agenda-setting power on the right was on full display in this election cycle. The iron triangle of Drudge, Fox, and talk radio spent a year in pro-Trump lockstep, eliding over stories critical of Trump, and providing him with an ideological hall pass on his many, many, many transgressions from conservative doctrine.”

Speaking of “transgressions,” whatever happened to Reagan’s 11th Commandment? Here we are two days away from Trump’s acceptance speech, and the bitter-end “Never Trump” movement can’t seem to get over its own failure. All the millions of dollars spent by rival GOP campaigns during the primary failed to defeat Trump, but instead of accepting responsibility for their their failure, the losers are now hunting for a scapegoat: “Blame Drudge!”

When did poor sportsmanship become part of “conservative doctrine”?