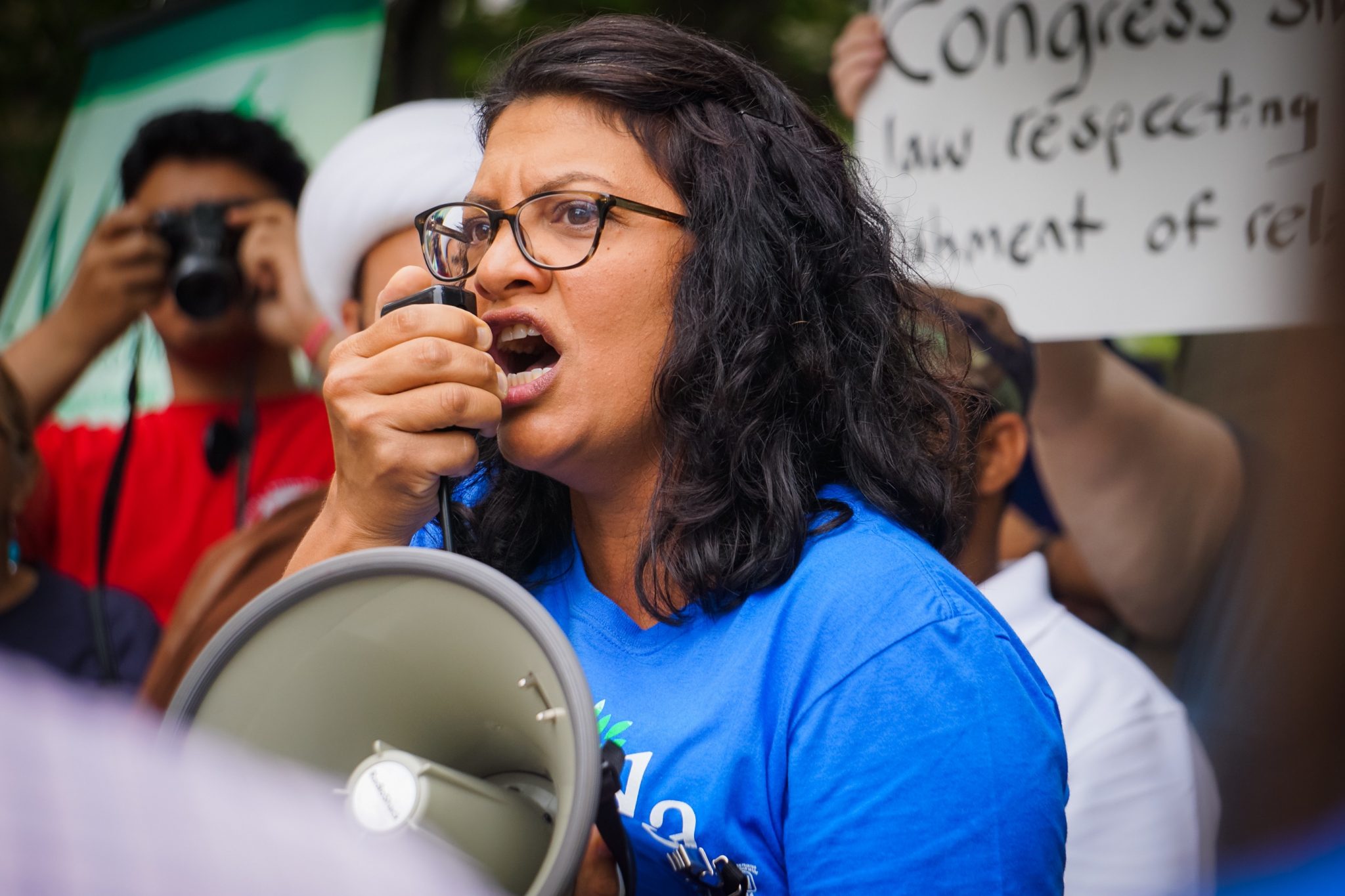 On February 1, State Department official Kara McDonald announced that the Biden administration “embraces and champions the working definition” of anti-Semitism established by the International Holocaust Remembrance Alliance. The Jewish community widely applauded the announcement, which comes at a time when anti-Semitic delusions continue to be normalized in American politics and culture.

The announcement came shortly after national headlines fixated on Rep. Marjorie Taylor Greene (R-Ga.), the freshmen representative who had previously entertained a bizarre plot involving Rothschilds, forest fires, and space lasers (among other things). Rothschild tales are a traditional and popular theme in the endless and intellectually vapid cesspit of anti-Semitic lore. Another recent example appears in rapper Jay Electronica’s latest album, where he insists, “I bet you a Rothschild I get a bang for my dollar / the synagogue of Satan want me to hang by my collar.” Jay Electronica has been nominated for a Grammy for this work. New York Gov. Andrew Cuomo has also flirted with myths and lies about Jews. He went on to win an Emmy.

Ms. Greene has certainly made anti-Semitic statements, but it’s evident that our truth-defending and righteous American punditry, the woke superstars, have little interest in reporting incidents of anti-Semitism unless it comes from their preferred targets. For Biden, combatting anti-Semitism from the Right is natural and politically popular. But his real challenge isn’t the right-wing conspiracy theorists like Marjorie Greene. It’s members of his own party who have adopted similar anti-Semitic myths — ideas described by the IHRA definition by which his administration claims to abide.

The IHRA definition of anti-Semitism is an attempt at reining in anti-Semitic abuses of power by informing the public of modern libels against Jews that have been or are currently being used as the basis for anti-Semitic conspiracy theories and movements. The definition becomes controversial when it lists specific examples of revisionist history and distortions regarding the State of Israel and describes the anti-Semitic ideas behind them. For example, the definition states the following should be considered anti-Semitic:

Denying the Jewish people their right to self-determination, e.g., by claiming that the existence of a State of Israel is a racist endeavor.

The IHRA’s determination that it is anti-Semitic to call Israel racist is not a social theory derived from abstract critical analysis conjured up in a humanities department at a UC campus, but rather a conclusion that has been made in light of history. The idea that Israel or Zionism, and by natural extension anyone that supports them (Jews or “Zionists”), is inherently racist is an artifact of Cold War propaganda concocted by the Soviet Union. Throughout the Cold War, Israel was the United States’ ally in the Middle East while Israel’s foes, the Arab governments, were client states of the Soviet Union. After the Six-Day War in 1967, a decisive victory for the Israelis against the Soviet-armed Arab armies, Soviet propagandists escalated their “anti-Zionist” propaganda war in a frightening way. They recycled 19th-century anti-Semitic conspiracy theories used by the Nazis that promulgated deranged myths about secret Jewish plans for global domination and redirected them at the State of Israel and Zionism.

The Soviet Union nominally opposed all forms of anti-Semitism, so this propaganda, while using the same imagery and themes, was reformatted to match their “progressive” worldview. Israel was depicted as a center of international imperialism, racism, and counter-revolution. The “Zionists” were attacked as racial supremacists, comparable to Nazis, and were accused of the same deluded conspiratorial plots outlined in the infamous hoax called the Protocols of the Learned Elders of Zion. Some examples of anti-Semitic Soviet propaganda can be seen here. A clip from a Soviet anti-Zionist documentary can be viewed here.

The Palestinian Liberation Organization (PLO), backed by the Soviet Union, adopted Soviet anti-Zionist propaganda in their revised charter, published the year after the 1967 war. Article 22 of the charter reads:

Zionism is a political movement organically associated with international imperialism and antagonistic to all action for liberation and to progressive movements in the world. It is racist and fanatic in its nature, aggressive, expansionist, and colonial in its aims, and fascist in its methods. Israel is the instrument of the Zionist movement, and geographical base for world imperialism placed strategically in the midst of the Arab homeland to combat the hopes of the Arab nation for liberation, unity, and progress. Israel is a constant source of threat vis-a-vis peace in the Middle East and the whole world.

The Soviets worked hard to warp the narrative of the Israeli–Arab conflict from an ethnic conflict to a global and ideological conflict between good and evil. In doing so, “progressive” global forces were ideologically and morally compelled to destroy Zionism and attack Israel, a country at that time composed largely of Holocaust survivors and Jewish refugees from Arab lands. Soviet anti-Zionism was distributed in the Eastern Bloc and other non-aligned countries, producing destructive and bloody results.

One such terrorist attack occurred in 1972. Japanese communists entered Lod airport carrying violin cases, and, once inside and in a populated section of the airport, they opened the cases, removed submachine guns and grenades, and began slaughtering civilians. They killed 26 people, the majority of whom were Christian tourists from Puerto Rico. The lone surviving terrorist was apprehended and would later confess that he committed the attack because it was his “duty as a soldier of the revolution.”

Later, in 1976, West German communists, in coordination with Palestinian radicals, hijacked an airplane en route to Israel. Once in control, they separated the Jewish and non-Jewish passengers, released the non-Jewish hostages, and threatened to kill the remaining hostages unless Palestinian terrorists were released from jail. The standoff ended with the infamous raid on Entebbe airport.

Leftist ideologues in the West have also been inspired by Soviet anti-Zionism. Angela Davis, a long-time leader in the Communist Party USA and a recipient of the Lenin Peace Prize in 1979, continues to this day to preach the lie that Zionism is a form of racism and that therefore intersectional justice requires resistance to Israel. One of her supporters, Marc Lamont Hill, who was fired from CNN for publicly calling for the destruction of Israel, has carried this anti-Semitic relic of the Cold War into 2021. In 2016, he traveled to Israel with the group the “Dream Defenders.” The group published a video of one of their staged protests online. Staring directly into the camera, Hill proclaimed the following:

We came here to Palestine to stand in love and revolutionary struggle with our brothers and sisters. We come to a land that has been stolen by greed and destroyed by hate. We come here and we learn laws that have been co-signed in ink but written in the blood of the innocent and we stand next to people who continue to courageously struggle and resist the occupation. People who continue to dream and fight for freedom. From Ferguson to Palestine, the struggle for freedom continues.

Hill said this while standing in Nazareth, a city in Israel, not in the disputed territories. Hill was referring to Israel itself as an occupied land, and his words were clearly, directly or indirectly, inspired by anti-Zionist communist propaganda. “From Ferguson to Palestine” indicates that for Hill, this is not a local conflict but rather a global struggle against injustice, a crusade against the devil in our midst, an evil so powerful and influential it even corrupts American police officers, training them to brutalize Black Americans.

Hill’s statement is not criticism of the Israeli government; it is the expression of a perverse and potentially genocidal worldview that lays the world’s ills at the feet of Israel, the Jewish state. This is a new evolution of anti-Semitism for the modern world, and it’s building support among the progressive wing of the Democratic Party.

Rep. Rashida Tlaib (D-Mich.) has repeatedly insisted that Israel is a racist state and therefore opposes U.S. support of the country. She supports the BDS (Boycott, Divestment, and Sanctions) movement, which is explicit in its goal of eradicating Israel. Tlaib has retweeted the phrase “From the river to the sea, Palestine will be free.” This is a genocidal war cry from PLO terrorist organizations and jihadist groups, but Tlaib, relying on the theory that the Jews are racist, believes this call for mass murder and terror should be inverted to a progressive and moral position.

Rep. Betty McCollum (D-Minn.) has also called Israel an apartheid state and has claimed that the American Israel Public Affairs Committee (AIPAC) is a “hate group.” With Israel and the Jews tagged as racists, she’s able to make conspiratorial and absurd claims — for example, suggesting the Iraq War was sold to Americans with lies from “Israeli neocons,” which she once claimed on the floor of the United States Congress.

Rep. Alexandria Ocasio-Cortez (D-N.Y.) has taken advantage of the modern progressive demonization of Jews. In an email to her followers, she solicited money and support on the basis that “AIPAC is coming after” them (the Squad) because they oppose money in politics and are critical of American foreign policy.

Rep. Ilhan Omar’s (D-Minn.) statements about Israel and Jews having “hypnotized the world,” manipulated the United States government with Jewish money, and harbored dual loyalties are all consistent with a conspiratorial worldview and antipathy towards Jewish people.

The members of the Squad, including Tlaib, Ocasio-Cortez, and Omar, are the prominent tip of the anti-Semitic iceberg within the Democratic Party. The inspiration for the Squad’s radicalism can be found at universities across the country. In local politics, chapters of the Democratic Socialists of America (DSA) are working hard to fill city councils with radical candidates who are at times pressured to sign pledges in support of the boycott and eradication of Israel. The result is an institutional bias against American Jews.

In a 2015 speech to the Union of Reform Judaism, then-Vice President Biden declared, “The bigoted attacks, the efforts to delegitimize Israel, are nothing short of anti-Semitism. Plain and simple.” He was correct, and now he’s on a collision course with those very people he once spoke out against. Good luck, Mr. President. Your confrontation with the new anti-Semitism is coming.