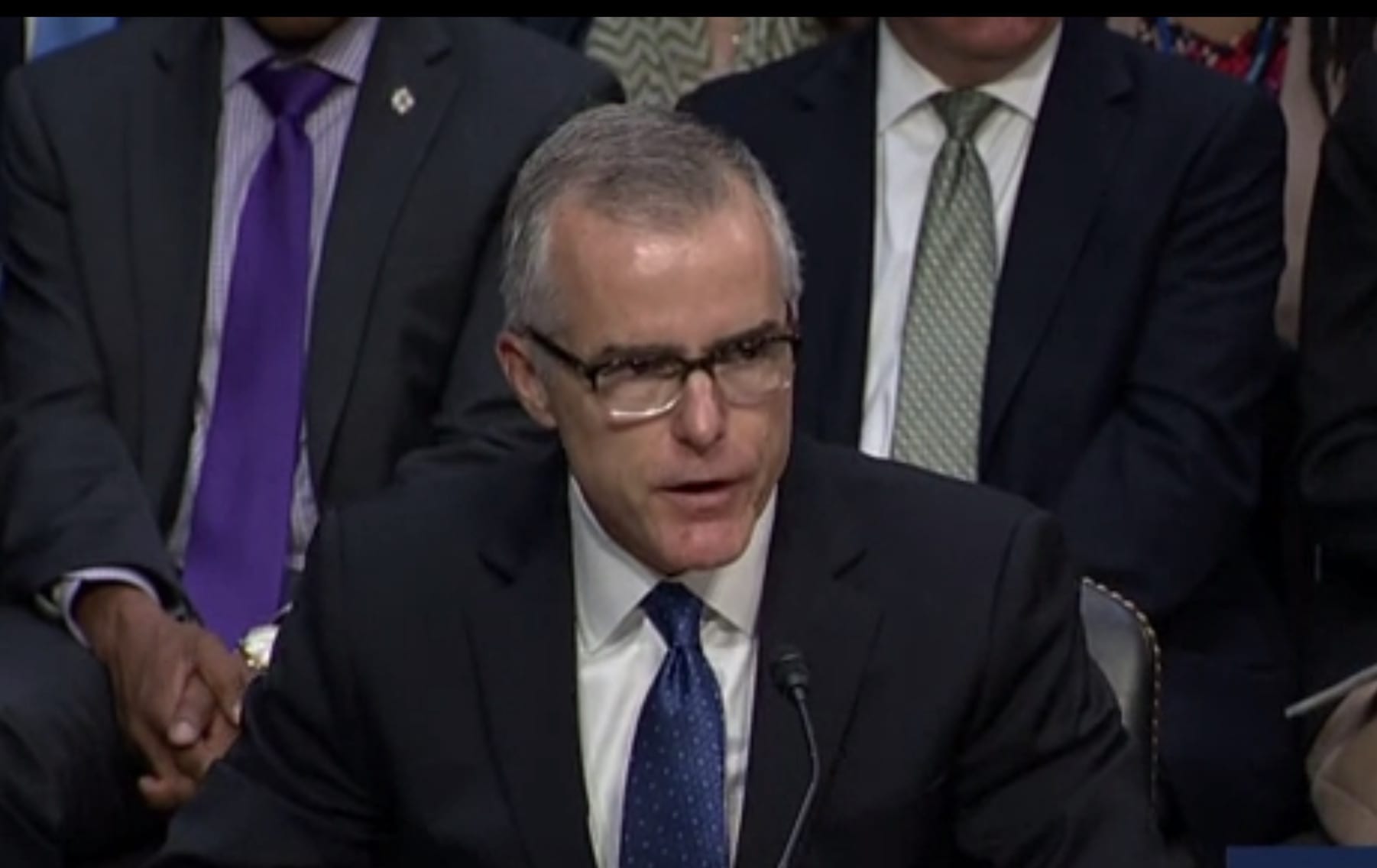 According to the just released report by the Justice Department’s Office of Inspector General, former FBI Deputy Director Andrew McCabe wrongfully caused sensitive law enforcement information to be leaked to the Wall Street Journal and then lied to investigators about having done so. The report runs thirty-five single spaced pages and lays out in excruciating, meticulous, and damning detail how McCabe authorized an anonymous leak calculated to make it appear that he had resisted pressure by Loretta Lynch’s Justice Department to close down the FBI’s investigation of the Clinton Foundation during the 2016 election campaign and then proceeded to cover his tracks with lies.

As spelled out by the OIG, McCabe’s troubles started on October 23, 2016, when the Wall Street Journal published an article by reporter Devlin Barrett stating that political action committees run by Virginia Governor Terry McAuliffe and the Virginia Democratic Party (over which the article reported McAuliffe “exerts considerable control”) had donated almost $675,000 to the failed 2015 state senate campaign of McCabe’s wife. The article described McAuliffe as “an influential Democrat with long-standing ties to Bill and Hilary Clinton.” It stated that McCabe was an FBI official “who later helped oversee the investigation” into Secretary of State Hilary Clinton’s use of an unsecured private email server.

The article noted that, when the investigation of Clinton’s emails was launched in July 2015, McCabe was “running the FBI’s Washington, D.C. field office, which provided personnel and resources to the Clinton email probe.”

By October 25, 2016, McCabe had learned that Barrett was working on a follow-up story that would cover McCabe’s oversight of the FBI’s investigation of the Clinton Foundation and potential connections with McAuliffe-controlled campaign contributions to McCabe’s wife. Consequently, McCabe directed FBI lawyer Lisa Page to discuss the upcoming article with Barrett. Ultimately, McCabe directed Page to tell Barrett about how McCabe had resisted pressure to shut down the FBI’s investigation of the Clinton Foundation in a telephone conversation with a high Justice Department official.

On October 30, 2016, Barrett reported in the Wall Street Journal that McCabe “was caught…[in] an increasingly acrimonious fight for control between the Justice Department and FBI agents pursuing the Clinton Foundation case.” It further highlighted the campaign donations to McCabe’s wife by political action committees associated with McAuliffe, who was described as a “longtime ally of the Clinton’s and… a Clinton Foundation Board member.”

The article identified McCabe as the FBI official who “sought to refocus the Clinton Foundation probe,” and reported that agents “further down the FBI chain of command” had been told to “[s]tand down” on the Clinton Foundation investigation with the understanding that “the order had come from the deputy director — Mr. McCabe.” The article stated that “[o]thers familiar with the matter deny Mr. McCabe or any other senior FBI official gave such a stand-down instruction.” In support of this latter point, the article recounted an August 12, 2016 telephone conversation between McCabe and a senior Justice Department official as follows:

According to a person familiar with the probes, on Aug. 12, a senior Justice Department official called Mr. McCabe to voice his displeasure at finding that New York FBI agents were still openly pursuing the Clinton Foundation probe during the election season. Mr. McCabe said agents still had the authority to pursue the issue as long as they didn’t use overt methods requiring Justice Department approvals.

The Justice Department official was “very pissed off,” according to one person close to McCabe, and pressed him to explain why the FBI was still chasing a matter the department considered dormant… “Are you telling me that I need to shut down a validly predicated investigation?” Mr. McCabe asked, according to people familiar with the conversation. After a pause, the official replied “Of course not,” these people said.

This leaked story of McCabe’s bureaucratic heroism was calculated to override the claims by those agents lower down the FBI food chain who said that McCabe had shut down the Clinton Foundation investigation. But, for whatever short term benefit McCabe may have derived from the favorable publicity, it started an investigation by the FBI’s Inspection Division to find the source of the leaked information about his telephone call.

The OIG report sets forth how McCabe denied to FBI Director James Comey that he had anything to do with the leak, and then repeated his denials under oath to the FBI Inspection Division agents. But, as the evidence contradicting his story mounted and the noose tightened, McCabe began changing his story to fit the emerging facts until ultimately he admitted to the agents that he was the source of the leak.

At that point the FBI turned the matter over to the OIG. Here again, McCabe lied under oath when he told the OIG’s investigators that he was not aware of whether FBI lawyer Page had ever been authorized to speak to reporters.

There are many more twists and turns in the OIG report. But, after conducting its exhaustive investigation, the OIG has now concluded that McCabe was guilty of “lack of candor” (i.e., lying) at least three times under oath (a) regarding his responsibility for the leak and (b) in his descriptions of what he had told investigators and how the investigators had conducted their interviews of him. His characterizations of the agent interviews were calculated to portray his instances of “lack of candor” as honest mistakes and the product of mere inadvertence.

The OIG also has concluded that McCabe lied to Comey when he denied knowing who had leaked the information about the Clinton Foundation investigation and then lied to investigators about his interaction with Comey.

When McCabe was fired on the recommendation of the FBI’s Office of Professional Responsibility, he claimed in an op-ed published by the Washington Post that he was a victim of “divisive politics and partisan attacks.” His wife followed up in a Post op-ed in which she blamed “the president’s wrath.”

Michael Bromwich, McCabe’s lawyer, has released a statement that his client’s treatment was “far more harsh and less fair than he deserved,” and that the OIG’s report “utterly failed to support the decision to terminate Mr. McCabe.”

But, as the former Deputy Director of the FBI, McCabe must certainly understand that lying to federal agents is a crime. If he has any doubts or questions about how that works, he should check with General Michael Flynn. Since McCabe is now facing possible criminal prosecution for his lies under oath, he would seem to be ineligible for further employment by the world’s greatest law enforcement agency.

In his cover letter to the report, Inspector General Michael Horowitz stated that the OIG’s “election-related review” will be completed by mid-May. Presumably this will deal with the matters mentioned in the just-released report such as who shut down the Clinton Foundation investigation and why.

And what about the FBI’s fake, Potemkin investigation of Hilary Clinton’s emails? Who scripted and directed that vaudeville act? McCabe? Comey? Both? Hopefully, the answers to all those questions and more will be forthcoming when the OIG issues its second report in a matter of weeks.

Moreover, thanks to the OIG’s careful work, we now face the enticing prospect of a public swearing contest between McCabe and Comey as to who said what to whom in their discussion of the leak. Although the OIG accepted Comey’s version of events, McCabe insists that Comey is lying when he claims that McCabe did not tell him about the leak.

Comey told investigators that McCabe “definitely did not tell me that he authorized” the leak. He continued that, “I have a strong impression that he conveyed to me, ‘it wasn’t me boss.’ And I don’t think that was by saying those words, I think it was most likely by saying ‘I don’t know how this s— gets in the media or why would people talk about this kind of thing,’ words that I would fairly take as ‘I, Andy, didn’t do it.’”

But McCabe’s lawyers claim that emails between their client and Comey “clearly show that Mr. McCabe specifically advised Director Comey that he was working with colleagues at the FBI to correct inaccuracies in the [Wall Street Journal] story before it was published, and that they remained in contact through the week end while the work was taking place.”

So, was Comey complicit with McCabe in leaking the sensitive law enforcement information? That would certainly be consistent with Comey’s outrageous and cowardly leak through a third party to the New York Times of his memoranda of private conversations with the president. In this one instance, McCabe may actually be telling the truth when he says that Comey approved the leak.

Where does all this leave us? On the road to good times, that’s where. Think about it. This is shaping up to be major entertainment as the sanctimonious, self-aggrandizing drama queen former FBI Director and his scheming deputy try to out swear one another over Comey’s participation in the leak. This spectacle, starring the leaders of the Obama era FBI, will hardly be a remake of “The FBI in Peace and War” or similar Hoover era offerings. Instead, it will more closely resemble “Bumfights, the Thrilla’ in D.C.” as these two shameless, shifty, self-promoters rip each other apart.

Happily, neither of the participants in that demolition derby will be of much value to Special Counsel Mueller’s anti-Trump snipe hunt.

And here’s another exciting possibility that is almost too good to be true. McCabe’s lawyer says that his client is considering filing a defamation suit against the president and others. For what, besmirching his terrific reputation for honesty and truthfulness?

If McCabe sues for libel or slander, his entire existence from cradle to today will become an open book. Every nook and cranny of his life, finances, marriage, work, and reputation will be fair game for ruthless exploration and exploitation by defense counsel. He may think he’s been thoroughly investigated, but he hasn’t seen anything until defense counsel in a defamation suit finishes tearing his life and reputation apart.

Though this first OIG report is narrowly focused on one single leak to the media and its attendant cover up, it’s a good omen of great things to come. The OIG has delivered the goods in round one.

Consider it a preview of coming attractions.