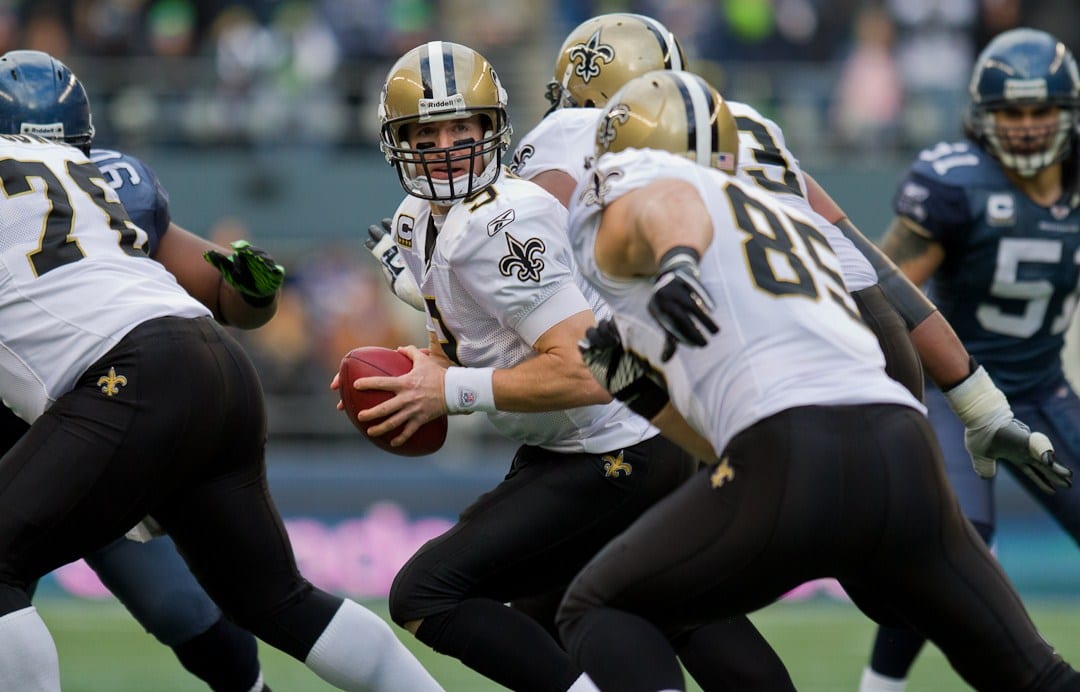 The Louisiana Superdome was rocking Monday night as only a New Orleans venue can rock, celebrating not just a 43-19 slaughter of the Washington Redskins but the epic accomplishment of quarterback Drew Brees setting the all-time NFL passing yardage record.

It was a civic lovefest for the ages.

Well, most fans don’t love QBs the way New Orleanians love Drew Brees. (Rhyme intended.) Brees is a walking, throwing, living embodiment of a special city’s return from near-death caused by a huge brees, er, breeze, known as Katrina. That story has been oft-told: When some 80 percent of the Crescent City had been under water, the long-woeful Saints provided unity, hope, and a sense of mission, with then-new quarterback Brees, returning from a gruesome should injury, leading the way — all the way towards a previously unimaginable Super Bowl victory in 2010.

On the field, not only has he long been the most accurate passer in NFL history (before this week also becoming the most prolific), but he has been a model of professionalism, sportsmanship, and team-first approach. With the Saints putting up top offensive numbers year after year, only to see its defenses regularly fail (sometimes spectacularly in playoff games that Brees and his offense seemed to have won), Brees never once (as far as I have seen or can find) has whined about his defense’s inadequacies or even idiocies, never once bemoaned his luck or his fate, but instead always just refocuses on how he himself can do even better and approach even more closely to perfection.

This year, at age 39, Brees is on pace for what even by his standards would be his best statistical season ever, and perhaps the best season for any quarterback ever. His passer rating is 122.3, with 333 yards per game, a 78 percent completion percentage, 11 touchdowns — and not a single interception in five contests.

Thus it is that New Orleans fans, who have been known to welcome and even celebrate players of the less strait-laced variety, have adopted the scandal-free, intense-but-approachable perfectionist as not just Saint but virtual guardian angel. Some of them even wear team jerseys proclaiming him a football Breesus (yes, spelled that way), sure deliverer of gridiron redemption.

And Monday night, Brees was virtually unstoppable. He completed 26 of 29 passes for 363 yards and three touchdowns, ran for another yard, caught his own deflected pass for another yard — and, of course, threw no interceptions. The cheering crowd was so loud — repeatedly exceeding 100 decibels, according to a scoreboard monitor — that fans throughout my section were putting fingers in their own ears to mute the noise even as they, by yelling encouragement, added to it. The scoreboard regularly updated Brees’ progress, first as he passed Brett Favre for second on the all-time yardage list, and then as he crept ever closer to Peyton Manning for first.

(There must be something in the water in New Orleans that breeds quarterback superstardom: Only three quarterbacks in NFL history have passed for more than 70,000 yards: Brees is the Saints’ longtime starter; Manning grew up in New Orleans as the son of legendary Saints QB Archie, and Favre grew up just a low-traffic 50 miles away, often coming into the Crescent City for weekends and idolizing Archie Manning above all others.)

And when Brees did a signature move — looking left with a semi-pump fake, then swiveling right to hit a receiver wide open past a flummoxed defensive back — to break the record with a 62-yard touchdown pass to rookie Tre’Quan Smith, the crowd erupted with a delighted joy that induced chills and tears and not just admiration but love. With play interrupted while a mic’d up Brees went to the sidelines to kiss his wife and hug his kids — “I love you guys so much,” he told his sons. “You can accomplish anything in life if you’re willing to work for it! Alright?” — it was impossible not to understand how athletic competition, done right, can be an ennobling pursuit.

The classiness continued, as one would expect, when Peyton Manning’s visage came onto the stadium’s big screen. With his trademark wit followed by clearly genuine feeling, Manning issued a videotaped congratulation to Brees that left the latter laughing broadly on the sideline.

Oh, and there was still more than a half of football to play. It was another half in which Brees was just about perfect (zero incompletions), as the Saints built on an already large 26-13 lead by outscoring the Skins 17-6 in the third and fourth quarters. It was a major beat-down of a team, the Redskins, which had been looking at least pretty good so far this season.

For all 12 years of Brees’ tenure in New Orleans, one of the best things about him is that he always seems to be having fun in the games. Peyton Manning always seemed wound ultra-tight on the field (different from his TV persona), and Tom Brady usually gives a vibe of Joe Cool. But Brees, while clearly the chairman of the board, seems like the kind of boss who is fun to work for, all infectious enthusiasm and can-do spirit.

Brees, hampered by the Saints’ notoriously bad defenses, may “only” have one Super Bowl win to his credit. That’s still one more than Dan Marino, Dan Fouts, Philip Rivers, Warren Moon, and Fran Tarkenton put together. Nobody can doubt that a Brees-less Saints these past 12 years would barely even have sniffed the playoffs, rather than being always in the post-season hunt.

And sometimes, “good guys” win, as Brees and the Saints did in 2010, and as they have quite a chance to do this year. When head coach Sean Payton pulled Brees from the game Monday night with victory in hand at the two-minute warning, the crowd of course gave yet another standing ovation. But there was a different quality to the atmosphere than anything I’ve witnessed in stadia before. Something in the character and warmth of the smiles on fans’ faces showed they weren’t just applauding a football player. These fans, and those throughout the city, were and are embracing Brees as man in full.