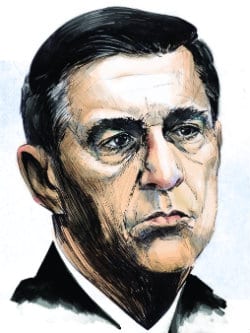 IT WAS ABOUT 85 degrees on the third floor of the Rayburn House Office Building, but Darrell Issa was offering me scotch. Sort of. Until I graciously accepted. “Well, I’d like some too,” he countered, “but we don’t have any. How about water or a Diet Pepsi?”

This sounded like a corny joke, not something I had expected to hear from the dapper Chairman of the House Oversight and Government Reform Committee, a self-made millionaire reportedly as many as 450 times over who, when I entered his private office on the first day of the government shutdown, was leaning back in a swivel chair with his feet up on his desk studying his iPhone through expensive-looking spectacles. But I did not think that he was just goofing off.

It’s an odd contrast. Throughout our interview he seemed simultaneously guarded and relaxed, on-message but tuned in to what I was asking. He seems a bit of a cold fish, a results man, not emotional or sentimental, or, especially, quixotic. When he takes up a cause, such as the eventual recall of California Governor Gray Davis in 2003—on which he spent $1.6 million—he does more than see it through to the end: He wins. Whatever else he is, Issa is not corny.

More than anyone else in the House, Issa has a name associated with attempts to keep all the candles burning on the Obama administration’s five-armed scandalabra: Fast and Furious, Benghazi, the IRS, the AP, the NSA. That these tapers have not been extinguished, despite the shift in Washington’s attention over the past year from the scandals to immigration reform to possible military intervention in Syria and now, finally, to the Affordable Care Act, the budget, and the debt ceiling, speaks very much to Issa’s personal vigilance.

HAROLD WILSON ONCE told a room full of journalists that a week is a long time in politics. When I sat down with Issa, it had been a really long week. Returning from a fact-gathering mission to Libya, Egypt, and Italy, he arrived just in time to join his House Republican colleagues in attempting first to defund Obamacare, then to delay its implementation in toto, and finally to push back the only mandate requiring individuals to purchase insurance. The day before the federal government shut down, U.S. District Court Judge Amy Berman Jackson ruled that a suit filed more than a year ago by Issa’s committee over access to Department of Justice records should not be dismissed. Attorney General Eric Holder had argued that the judiciary had no place settling a dispute between the legislative and executive branches. This victory has been a long time coming for Issa, and he spoke with patient satisfaction. “The claim that the courts could not decide differences between the other two branches was always frivolous,” he said. “Madison was still alive when it was decided that the courts could. But it does get us back on track.”

If the action proves successful, Holder will be forced to hand over records related to Operation Fast and Furious, the experiment in “gun walking”—which is to say, allowing criminals to carry weapons across the U.S.-Mexican border unheeded—carried out by the Bureau of Alcohol, Tobacco, Firearms, and Explosives. Fast and Furious gun walking may have been responsible for the deaths of an American Immigration and Customs Enforcement agent named Jaime Zapata and as many as 200 Mexican nationals, which might explain why, in February 2011, the Justice Department denied that it had ever taken place. This seems to have been a lie, albeit one whose origins are currently unknown. But Issa expects progress on this front soon. Here the endgame, he says,  is “getting the documents showing who perpetrated the lie, who knew about the lie, who continued the lie for ten months: a lie in which the American people were told that guns didn’t walk when in fact they walked with high-ranking assistance.”

About his recent trip overseas he was more tight-lipped. “I don’t recommend that you travel to Libya,” he said. But he does seem pleased with what he’s learned. “Our troops are positioned to respond within 53 minutes. They can be in the air in V-22s heading to anywhere in Africa. In a situation similar to the one we saw last fall in Benghazi, we could have boots on the ground in, say, Libya in no more than three hours.” This, he said, should be a great comfort to those serving our country on the continent.

He did mention, however, that the Oversight Committee would be proceeding with interviews of eyewitnesses to last year’s Benghazi attack. “We worked around them,” he said, “because they were at the scene and some were injured. Their testimony is essential. We need communications from people on the ground both in Benghazi and in Tripoli that led to whatever responses did or didn’t come.”

Many following the Benghazi story have been wondering whether Hillary “What Difference Does It Make?” Clinton might return for testimony before the committee, a possibility at which Issa has hinted in the past. He would not tell me outright whether we would be seeing Clinton under oath anytime soon; instead, he somewhat slyly explained why she ought to testify. “She has first-hand knowledge of those first eight and a half hours, when the Department of Defense did not become involved,” he said. “It’s our understanding that the State Department wanted to handle this matter internally. But at some point within minutes or hours of the attack, Hillary Clinton knew that it was a pre-planned terrorist attack. Yet she said not a word when Ambassador Rice went on not one but five Sunday shows, on one of which she was actually opposite the head of state from Libya, who was saying the reverse.”

THE POSITION OF Oversight Committee chairman would seem to call for a man who’s unafraid to throw elbows, and Issa certainly fits the bill. A few hours before I dropped in, he had appeared on CNN’s News Day with Chris Cuomo to discuss the government shutdown. In the course of asking him about this, I described his exchange with Cuomo as “heated,” at which point he uncharacteristically interjected. “Was that ‘heated’?” he asked, not quite pointedly. I admitted that phrases like “heated exchange” are journalistic clichés, but pointed out that reporters for various outlets, including Politico, had used it to characterize his appearance. “Look,” he said, “he kept asking about ‘When you guys shut down the government.’ When a prominent member of the family of the Democratic governor of New York tries to phrase a question in such a way that there is no answer to it I will restate it. Because we didn’t shut down the government. We offered again and again to compromise.”

Still, Issa the man seems affable enough, if understatedly so. His grandparents emigrated from Lebanon, so he has some expertise in the matter, but he can’t make up his mind which Lebanese restaurant in D.C. he likes best. “It all depends upon your taste. If you like grill, Kababji over on Connecticut is good. It’s pretty authentic, and its Lebanese wine list is extensive.” He mentions several other favorites before adding, “Lebanese believe that all tabouli is good, just none of it is as good as Mom’s.” When I asked him about This Town, Mark Leibovich’s recent paean to Washington venality, which stars Issa’s former staffer Kurt Bardella (whom the congressman fired for leaking journalists’ emails to Leibovich), he said nothing, but smiled and pointed to a copy on one of his bookshelves.

ISSA, WHO IS fond of gadgets and is said to take a personal interest in fixing his staffers’ malfunctioning computers, is an insider who increasingly looks almost like an outsider. At a time when the Republican Party’s ranks are swelled with up and coming intellectuals—and, let’s face it, some good-intentioned pseudo-intellectuals—Issa is not an idea man trying to transform the GOP.

Despite his concerns about the NSA’s domestic spying program, he still says that he would vote to reauthorize the Patriot Act, though he mentions that he “would insist on safeguards” for Americans’ privacy. Nor has he done much to put distance between himself and the Bush-era foreign policy consensus against which Rand Paul and so many of the party’s younger stars have defined themselves. Media savvy or otherwise, he is not, despite what a House GOP ally suggested recently, much of a “show boat” either: if anything he is more like a veteran stagehand diligently working the spotlight to the party’s front-and-center prima donnas.

Issa is really a skilled technician, a mechanic who has spent the last year reverse-engineering the Obama administration’s scandals to the delight of his colleagues. He is a patient man who understands procedure. His explanation of why it is in the best interest of the Oversight Committee to gather as much preliminary evidence as possible before asking Hillary Clinton to testify might be a stand-in for his entire approach to politics: “We make it a point,” he said, “not to start at the top and work down but rather to build the evidence from the bottom up so that our questions are narrow and necessary.”