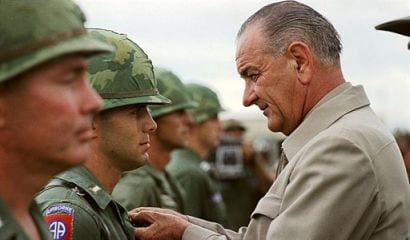 You wouldn’t expect a ticket for a play about Lyndon Johnson tofetch $220 on Craigslist. The demand owes less to LBJ than to the man playing him on stage — Bryan Cranston.

In a career that has spanned more than 30 years, Cranston has attained A-list status in Hollywood for his portrayal of Walter White/Heisenberg on the groundbreaking TV series Breaking Bad, which concluded its six-season run a little over a week ago.

Now at the pinnacle of his profession, Cranston has the luxury to pick any project of his choosing and he has chosen to take to the stage to play LBJ in All the Way, which is near completion of a sold-out, month-long run at the American Repertory Theater in Cambridge, Massachusetts.

Written by Robert Schenkkan (who undertook the project for the Oregon Shakespeare Festival in 2012) and directed by Harvard alum Bill Rauch, All the Way covers LBJ’s first year in office. It has just been announced that All the Way will make its Broadway debut sometime early in 2014, with Cranston reprising the lead role.

Not many actors have taken on the challenge of playing the 36th President of the United States. In 1987, Randy Quaid (many years before he went off the deep end) arguably delivered the greatest performance of his career in the NBC TV movie LBJ: The Early Years. Although Quaid was only 36 when he took the role, his height, weight, and native Texas twang made him born to play LBJ.

While Cranston at 57 is closer in age to LBJ when he became President (he was 55), the actor does not possess LBJ’s physical stature. But he does possess an uncanny facial resemblance to LBJ and has his mannerisms and salty language down pat. You’ll cringe in discomfort as his LBJ describe his coronary troubles and how he hates it when Lady Bird makes him go on a diet when he appears fit as a fiddle.

More importantly, Cranston captures the essence of LBJ. The audience sees a man who wanted to help the downtrodden, but is quick to anger when the downtrodden don’t reciprocate his kindness. “All I want is a little respect and love. Is that too much to ask for?” asks a frustrated LBJ. The audience is also treated to LBJ’s perpetual dissatisfaction even in triumph. “How do you win a campaign? By not losing it,” LBJ asks and answers. But even when LBJ wins 61% of the popular vote in the 1964 presidential election, all he can focus on is on the Democratic Party losing the South. Cranston’s performance is the best part of the play.

Aside from Cranston and Brandon J. Dirden (who turns in a stirring performance as Martin Luther King, Jr.), the remaining members of the cast play multiple roles. For instance, Michael McKean (ofLaverne & Shirley and This Is Spinal Tap fame) plays both J. Edgar Hoover and Robert Byrd. Reed Birney plays both Hubert H. Humphrey and Strom Thurmond while Dan Butler plays five parts, including Governor George Wallace and United Auto Workers President Walter Reuther. Whether this casting was done by design or by financial necessity, it proves to be a distraction as it becomes difficult to tell who is who from one scene to the next. Although Barry Goldwater is mentioned numerous times, Schenkkan doesn’t see fit to include the 1964 GOP nominee on stage.

Rauch’s direction can be cumbersome. However, he is excellent in juxtaposing LBJ’s speech to hostile Southern Democrats in New Orleans, MLK’s Nobel Peace Prize acceptance speech, and J. Edgar Hoover’s efforts to discredit King (and by extension LBJ).

All the Way is divided into two acts. The first focuses on the passage of the 1964 Civil Rights Act and the second on the fight to seat the Mississippi Freedom Democratic Party (MFDP) at the 1964 Democratic National Convention in Atlantic City. But it’s a mistake to treat both events as having equal significance. One is left with the impression that if LBJ had failed to broker a compromise between the MFDP and the DNC, it would have resulted in a Goldwater presidency. In 1964, the question wasn’t whether LBJ would win the election, but by how much.

In her 1976 biography Lyndon Johnson and the American Dream,Doris Kearns Goodwin writes that LBJ “rarely went to movies or plays because he disliked sitting quietly in a theater for three hours.” If LBJ had the chance to watch a play about LBJ, somehow I doubt he would have sat there quietly (even though I suspect he would have found a kindred spirit in Bryan Cranston). At three hours in length, All the Way is far too long and mostly meanders in the second act. Indeed, All the Way lasts almost as long as the Johnson Administration did.