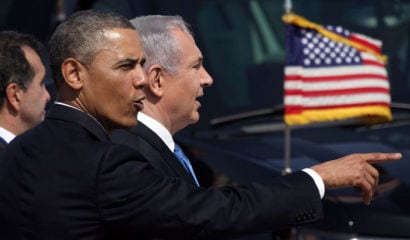 My late mother loved that joke about the cowboy who gets shot full of arrows by a band of Indian braves. When his buddies find him in terrible condition, they ask him if it hurts.

“Only when I laugh,” he answers.

One thing you learn quickly when living in Israel: the security of the State of Israel is a laughing matter. Citizens trying to survive in the trying political atmosphere over there learn to chuckle the doomsayers into oblivion. They guffaw, they cackle, they bellow, and they howl with laughter at every amusing situation that arises in the military realm.

Today they are all laughing again… at President Obama. Well, not at his policies officially. Nah, they would never do a thing like that. They view him with “the highest respect,” as Jackie Mason says. They are only laughing because his limo got towed.

Apparently the genius who is in charge of getting the President from place to place was not aware that the limousine runs on diesel, not regular gas. This fellow issued an executive order to start the Keystone Kops Pipeline, but the Kops refused to go on petrol. The Presidential party was forced to abandon the auto stationary and hitch another ride.

Now the last thing a serious commentator should do would be to see a metaphor in this fiasco. It would be ridiculous to advance the notion that the arresting of forward progress due to an intrinsic misconception as to the nature of the object, the subject, the energy and the catalyst is somehow symbolic of the failure of vision that is the Obama Mideast policy.

Yet we can hardly help but to ponder all the wizardry that has led to this point. The great Cairo speech designed to bring us closer to the Muslim world. The confession that the CIA should not have interfered in the Iranian government in the 1950s, when there is still no evidence that ever happened. The Syrian morass, the rise of the Muslim Brotherhood in Egypt, the Benghazi killings, none of these make us look any smarter or nicer. The Iranians have shown no sign of letting our famous “crippling sanctions” slow them down any.

All in all, that region has certainly grown no safer or friendlier since the United States elected a guy middle-named Hussein. Nor has the famously peripatetic Hillary Clinton era in the State Department made any visible inroads on any front. If all that incompetence provides any occasion for concern, wait until the Kerry-Hagel axis takes hold.

The good news for Israel is that the President does not like to undertake adventures that do not lead to quick results. There are no quick fixes in Israel, so the process is too unwieldy and unrewarding. To date he has limited his mangling of the relationship to such petty gestures as walking out on Netanyahu in the White House to go eat supper.

Now to liven things up, the White House leaked word that Obama would try to win the hearts of young Israelis by going over Netanyahu’s head to address them directly. In that vein, Obama decided to snub the Knesset and speak to students at a convention center. His State Department put out a video in advance of the trip and put up a map showing Israel with Jerusalem and the Golan Heights lopped off.

This kind of death of a thousand cuts may work in places where folks take themselves too seriously but not in Israel. This is the country where Jimmy Swaggart got off the plane after a sex scandal to be greeted with a sign proclaiming “Pro-Israel is the best position.” I was there myself when James Baker landed and was met by this banner: “Baker, go make your own bread…”

They figure they can outlast a guy like Obama. They can hold his car at the impound lot for four years. They can keep him waiting for a foursome at the golf course in Caesarea. They can nod their heads attentively while he explains to them that no President before him has read so extensively about Judaism. And they can give him a crate of Jaffa oranges as a door prize.

As for anything substantive changing, now that is cause for a good laugh right there. It’s like the old joke about the pale man with the pointy teeth entering a man’s bedroom at night. The man lifted his silver cross but the vampire just laughed and kept approaching.

“Did they sell me fake silver?” the man wondered.

“Oh, no, my brother-in-law only sells genuine artifacts. The only problem is I am Jewish…”