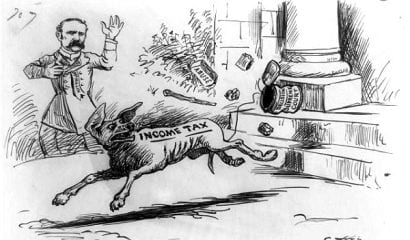 Most of us think of April 15 as “tax day,” but, of course, that doesn’t end our tax agony. Tax Freedom Day comes three days later, when the average American has stopped working to pay his taxes and starts working for himself and his family.

Even that isn’t the end for many. Actor Wesley Snipes was just released from prison after serving two years for “forgetting” to file federal returns from 1999 to 2001. He now has to pay Uncle Sam $7 million in back taxes and penalties. Ouch!

Most Americans don’t end up as federal inmates. But they still spend nearly a third of the year working just for government at some level. The Tax Foundation figured we will pay $4.22 trillion in taxes this year, which is 29.4 percent of our collective incomes.

It’s worse in high tax states. In Connecticut residents work nearly another month, to May 13. New Yorkers “only” labor until May 6. Live in New Jersey and your Tax Freedom Day is May 4. Massachusetts, where the American Revolution began, and Illinois are next at a pitiful April 25. California’s Tax Freedom Day is April 24.

Minnesota follows at April 23. Maryland, which plans to tax the rain (technically “impervious surfaces,” such as driveways, which promote rain run-off) comes in two days later, at April 21. Virginia’s Patrick Henry may have demanded liberty or death, but his state is among America’s worst with Tax Freedom Day on April 20. Washington State, Washington, D.C., and Wisconsin share the same day. Residents of Rhode Island and West Virginia stop paying on April 19.

If you want low taxes you should head south. Tax Freedom Day falls on March 29 in Louisiana and Mississippi. Tennessee is on April 2. New Mexico and South Carolina are on April 3.

Tax Freedom Day is up five days over last year because of the “fiscal cliff” deal which raised tax rates on high earners and payroll tax rates on everyone. That is painful, but equally bad is wild borrowing to fund ever-increasing government spending. Uncle Sam borrowed some $5 trillion over the last four years, which will have to be paid for some day by someone. Even this year, in the midst of supposed budget austerity, the deficit is expected to run $845 billion.

Unfortunately, borrowing that sum is only disguising the cost of government. Last year a CNN poll found that 48 percent of Americans believed their present tax burden was about right, compared to 50 percent who considered it to be too high. One wonders what the first group would think if they had to pay $845 billion more in taxes. They don’t because the Federal Reserve is “buying” debt issued by the Treasury Department, but spending $845 billion that we don’t have means we eventually will have to pay $845 billion more, plus interest, in taxes. (Unless Uncle Sam repudiates the national debt, a solution which is starting to look more attractive!)

A new Rasmussen poll found that nearly two-thirds of Americans don’t believe additional taxes are needed to fund Washington. In fact, the federal government doesn’t need more money to do the job that it should be doing. But it is doing far more. And until the American people say stop, they face much higher taxes in the future.

The latest Congressional Budget Office analysis warns that, assuming Congress and the president don’t create any expensive new programs or hike outlays for expensive old ones (and the sun rises in the west), the deficit will fall to $430 billion in 2015, and then begin an inexorable march back up to $1 trillion by 2023. Warned the agency: “For the 2014-2023 period, deficits in CBO’s baseline projections total $7.0 trillion. With such deficits, federal debt would remain above 73 percent of GDP — far higher than the 39 percent average seen over the past four decades. (As recently as the end of 2007, federal debt equaled just 36 percent of GDP.) Moreover, debt would be increasing relative to the size of the economy in the second half of the decade.”

This is before the entitlement tsunami hits. Social Security and Medicare alone account for $100 trillion in unfunded liabilities — compared to the official national debt of $16.8 trillion. Economist Laurence Kotlikoff has figured that Uncle Sam’s total obligations exceed $220 trillion. But who’s counting!

This wild irresponsibility should serve as a backdrop the next time legislators grow sanctimonious in denouncing individuals and corporations fleeing abroad to escape the depredations of the federal tax man. Who is unpatriotic? People seeking to protect their earnings from those who view them as nothing more than geese to be plucked? Or politicians looting the public to amass power and win election?

Congressional over-spending also should color any conversation about income inequality and social justice. Most people recognize that life is unfair. Welcome to the real world. However, only the naïve or mendacious believe that handing more power to politicians to engage in social engineering is likely to result in equality and justice.

Never mind the grand-sounding pronouncements of ancient Greek philosophers. The role of government is simple: to enable the influential and manipulative to live at the expense of everyone else. America’s Founders did their best to limit the ability of “factions” to use the state for their own ends. However, the barriers to expansive, abusive government have gradually fallen. Creation of the income tax was an important step toward creation of the special interest transfer state.

A beleaguered band of true believers in government still persist. For instance, law professor Lawrence Zelenak said he views “filing Form 1040 as an act of civic pride.” Some people probably also feel good about flushing the toilet. Sending money to Washington is about the same as flushing it down the toilet.

Most Americans have a better understanding than Zelenak of what is done with their earnings. If a congressman wants to get reelected, he hands your money to local supporters as pork. If he wants to aid an exporter or please a president, he sends your money abroad as foreign aid. If he wants to appear to be compassionate, he gives your money away through scores of programs nominally created for the poor — while enriching plenty of middle class professionals and discouraging work and marriage and wrecking families and communities.

To pacify business he forces taxpayers to provide corporate welfare through research grants, advertising subsidies, cheap loans, and more. In the name of “defense” he sends the public’s cash overseas to subsidize prosperous allies and rebuild failed societies. And to hook the population on the federal dole in the hopes of forever winning their votes, he creates great middle class welfare programs — Social Security, Medicare, and now Obamacare.

Paying for these programs is a patriotic act warranting civic pride?

The tax system is a mess and should be simplified, but real reform requires reducing spending first. Expensive government requires high taxes, today or in the future. Cut outlays and it becomes easier to reduce rates and simplify rules. Continue spending at current levels and “tax reform” is likely to become a foraging expedition for higher revenues through different means.

It also is important to tax rather than borrow. The illusion that one can collect benefits without paying for them encourages more, and more stupid, spending. Government should borrow to win an unavoidable war of survival. Government shouldn’t borrow to subsidize favored businesses, promote international social engineering, and send checks to the wealthy.

Finally, everyone needs to contribute before expecting to receive. The belief that one can collect benefits while making other people pay for them turns politics into a process of systematic looting. Yet half of American households either don’t file income tax returns or file but owe nothing, often through refundable tax credits. The possibility of voting benefits for oneself while sending the bill to someone else poses an ever more dangerous temptation.

Enjoy Tax Freedom Day! Americans have stopped working for government. Kind of. But beware the day when Uncle Sam’s big entitlement bills start coming due. Then there may no longer be a Tax Freedom Day.