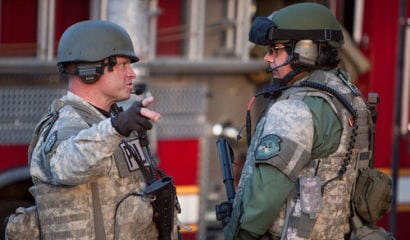 For most people in Massachusetts, Patriots’ Day is a long weekend. In most of the 13 years I have lived in Boston, I have had to work on Patriots’ Day. However, in the past couple of years, I have made a point of taking Patriots’ Day off. With no work holidays in the 100 days between Presidents’ Day and Memorial Day, I find that I need a little more time for myself.

I spent much of the weekend debating with myself as to what I would do on Patriots’ Day. Where Patriots’ Day is concerned, there are really only two options.

Option number one was to take the train to Concord to visit Walden Pond as well as Minuteman Historic National Park, the site of the North Bridge where the first shots of the Revolutionary War were fired on April 19, 1775.

Option number two was to go to Fenway Park to take in a Red Sox game which begins at 11 a.m. Following the game, I would have made my way to Copley Square to watch the Boston Marathon.

Last year, I saw the Red Sox and the Boston Marathon.

This year, I found that my pockets weren’t as deep as they were a year ago.

So I took the train to Concord.

But for the grace of God go I.

After crossing the North Bridge, I made my way to the Minuteman National Historic Park Visitor Center. Upon entering, I heard an older man utter, “Three people dead.” This man had a grim look on his face. My first thought was that there had been another mass shooting but something about the expression on that man’s face troubled me.

Those first thoughts were jettisoned when I received a phone call from my Mom five minutes later. It was then that I found out about the explosions at the Marathon. My heart sank when I heard two people had died and countless others had lost limbs.

She was relieved that I wasn’t in Boston but urged me to find a TV. I explained that I was not near one but that I had a radio on my MP3 player and that I would be heading back to Boston. My holiday was over.

I caught up on what had happened by listening to Howie Carr on WRKO, although the information fluctuated from moment to moment. Was the fire at the JFK Museum & Library part of the attack or was it a mere coincidence? Was there a Saudi national being questioned at Mass General? Or was he being interrogated at Tufts Medical? Or was there any person of interest at all?

When it was announced that President Obama would be making a statement, I knew he would do two things. Obama would tell the nation not to jump to conclusions and he would not use the word terror or terrorism (although the White House would later call it “an act of terrorism”).

While I realize there is a prudence in not jumping to conclusions, it is human nature to wonder who did this and why and making such inquiries is our obligation. My gut tells me that this had something to do with Israel Independence Day. I know my gut might very well be wrong but given all that has occurred over the past decade or so, it is something I am unable to discount at the moment.

Yet as I traveled home, nothing seemed to be out of the ordinary. I did not hear a single person speak about what had happened. Perhaps no one knew what to say. Perhaps there was nothing that could be said.

Now don’t get me wrong. I saw security at the entrance of North Station searching bags, but in a post 9/11 world this is something I see on the T from time to time. The only evidence of what happened was when I saw TVs in several public places turned on the news showing pictures of the chaos in Copley Square.

I did not see the two blasts on Boylston Street until I arrived back home and that’s when it really did hit home. I do not exaggerate when I tell you that I have walked down that stretch of Boylston Street thousands of times. I was just there on Saturday when I made a brief stop at the Boston Public Library. The first blast took place right next to Sugar Heaven, a candy store across the street from the BPL, which I have frequented.

On my cell phone, I have a picture of the 2010 Boston Marathon. This picture was taken on the corner of Boylston and Exeter Streets. Had I been on that corner this year, I might not be writing this dispatch.

As it did the lives of countless Americans, September 11, 2001 profoundly changed my life and my view of the world. Part of that change was the knowledge that something like this not only could happen on our soil again but happen on soil I have traversed. On occasion, when I have attended large public events in Boston it has occurred to me that such an attack could happen here. This thought crossed my mind on New Year’s Eve as I walked down Boylston Street during First Night. Then my thoughts turned elsewhere. Now it is very difficult to turn my thoughts to anything else.

I am sure there are many who cannot bear to think about what happened at the Boston Marathon. But this is something from which we cannot run away.