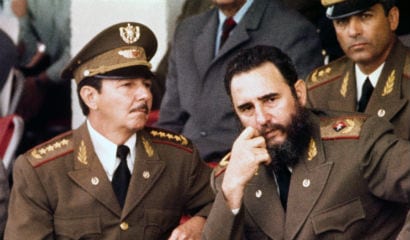 On the Friday of the last weekend in February, Cuban dictator Raul Castro caught the news agencies covering his island nation by surprise when he dropped a hint that he was thinking of retiring. Later that Sunday, at a meeting of Cuba’s communist National Assembly, Castro went much further and announced that he would step aside at the end of the five-year presidential term to which he had just been “elected.” Adding fuel to the fire was the announcement that Miguel Diaz-Canel, a relatively unknown 52-year-old communist party apparatchik, had been appointed Castro’s second in command—and would thus theoretically be next in line to take command after the aging dictator’s exit.

Naturally, journalists, analysts, and so-called Cuba experts immediately began to explore the possibilities and ramifications. Many of them proposed the Western Hemisphere’s bloodiest and longest-running dictatorship was now possibly just five years away from its end. Furthermore, Castro’s choice of a younger, more modern successor born after his brother’s revolution just had to be a sign that the island’s communist government was slowly but surely preparing to embrace a more democratic political system.

What many of these writers failed to do, however, was examine the latest political moves of the Cuban dictatorship through the prism of the regime’s history. Never in the past 53 years has anyone outside the Castro family possessed any real power in Cuba. Not only have the Castro brothers kept non-family members from positions of influence, they have summarily eliminated anyone who has posed or could possibly pose a threat to their authority. Therefore, it would be prudent to take Raul Castro’s retirement announcement and the appointment of Diaz-Canel with a proverbial grain of salt.

The victims (and alleged victims) of the Castros’ jealous grip on power are strewn all along the roadside of their half-century journey of absolute control in Cuba. One of the first was Camilo Cienfuegos, a charismatic and popular Cuban revolutionary leader who fought to overthrow the Batista government alongside the Castros and Argentine revolutionary Ché Guevara. In 1959, just months after Fidel took control, Cienfuegos disappeared in a mysterious plane crash. No wreckage was ever found and no bodies were recovered. Some speculate that it was no mere accident.

More recently, there are the cases of Roberto Robaina, Felipe Perez-Roque, and Carlos Lage. All three of these men were high-ranking, high-profile government officials, brimming with media savvy and touted as natural successors to the Castro brothers. And just as their popularity and standing peaked, all three men were unceremoniously removed from their positions. Last year, Ricardo Alarcon, another high-profile representative of the Castro government and supposed successor, was unexpectedly removed as president of the National Assembly, a position he’d held for 20 years. There were no announcements, no retirement parties, and no explanations. His name was simply dropped from the list of parliamentary candidates released in December.

The Castro dictatorship’s pattern of propping up replacements, only to knock them down before they get too powerful or too popular, is painfully evident. For that reason, it is hard to believe that Raul Castro’s latest political moves are anything more than another ruse to deflect attention away from the ruling family.

Just recently, in an interview with Russia Today, Fidel Castro’s son, Fidel Jr., defended Cuba’s dynastic succession of leaders as a “fact of life” and argued that, essentially, every country is free to “find its own way.” However, more revealing comments came from Fidel’s daughter, Alina Fernandez, who defected from Cuba in 1993 by using a disguise and posing as a Spanish tourist. With intimate knowledge of Castro family dynamics, Fernandez saw the news of her uncle’s retirement and the appointment of a relatively young successor as a ploy to buy more time to prepare a family member to take control of the country. She referred to her father and uncle as the “kings of improvisation,” always looking for new and innovative ways to stay on top.

NEVERTHELESS, at 81 years of age, Raul Castro may never make it to his retirement party in 2018. The inevitability of biology raises the $64,000 question: Who will take over Cuba when Raul and Fidel Castro eventually die?

The only thing history can tell us with some measure of certainty is that he or she will come from the Castro family line, and most likely will not be a direct descendant of Fidel. With two marriages and a proclivity throughout his life for one-night stands, no one outside the family knows exactly how many children Fidel has sired. Some accounts put the number—both those officially recognized and those who are not—at eight. But we may never know for sure, and anyone in Cuba who goes poking around the family’s dirty laundry will get an immediate and very unpleasant visit from Cuban State Security.

Those of Fidel’s children who live in Cuba have for the most part kept very low public profiles, either by choice or by force. None of them appears to hold any position of real authority. Two sons, Fidel Jr. and Antonio, might seem like natural candidates, but further examination tells a different story. Fidel Jr. wields no power, and his mother’s family history may be an important reason for that. He is Fidel’s firstborn son and only child with his first wife, Mirta Diaz-Balart. If her surname sounds familiar, it’s because she is the aunt of two Florida congressmen, brothers Lincoln Diaz-Balart and Mario Diaz-Balart. Both men, and their entire families, are staunchly opposed to the Castro dictatorship and are steadfast defenders of freedom and liberty in Cuba.

Antonio, or Tony El Cangrejo (“the Crab”) as he is known, is an unlikely choice for other reasons. He is the team physician for Cuba’s highly regarded national baseball team, but Tony appears to be a typical rich kid: spoiled, reckless, and more interested in partying than in running the family business. A few years ago, an exiled Florida man posed as a Colombian woman, strung him along on a six-month Internet love affair, and later published his amorous advances. On several occasions, unflattering pictures of Tony enjoying the good life a bit too much—with women and booze aplenty—have surfaced online. This is not the image Cuba’s revolutionary, “workers’ paradise” government wants to portray, especially when the average Cuban earns $20 a month and must struggle on a daily basis to find enough food to survive. (Luckily for him the vast majority of Cubans have no access to the Internet.) Further, Tony’s behavior suggests that he lacks the ruthlessness required of a future dictator, and this cannot have gone unnoticed by his father and uncle.

The case is completely different with Raul’s children. Some have speculated that Mariela Castro, his daughter, could be next in line to take over the country. She is a sexologist who travels the world and extols the grittiness of Cuban women who turn to prostitution in order feed and shelter their children. Ms. Castro, however, has spent the little political capital she has advocating for sexual freedom and, even more so, for gay rights. Her choice of causes is interesting considering the fact that her uncle Fidel at the height of the revolution sent anyone considered to be among the dregs of society—vagrants, religious adherents, and gay men—to labor camps. These camps, known as UMAPs (Military Units to Aid Production), had banners at their entry gates that read: “Work will make men out of you.” Although Mariela Castro’s cause may win her fans outside of Cuba, it does not do her much good on the island. Gay rights do not top the list of concerns for Cubans starving under the yoke of tyranny. More importantly, she does not appear to have secured the influence necessary to consolidate power.

Mariela’s brother Alejandro, however, does hold considerable power. Alejandro is a colonel in Cuba’s Revolutionary Armed Forces and head of the intelligence and counter-intelligence units of the nation’s two most powerful ministries: Defense and Interior. He is also a member of Cuba’s 14-member Military Junta, a group of generals headed by the Castro brothers who operate in secret and who are the true decision makers on the island. But there are some who believe Alejandro doesn’t have the intellectual wherewithal to keep a nation of 11 million people under complete control.

That leaves us with the apple of Raul’s eye, his grandson, Raul Guillermo Lopez-Calleja, the son of Raul’s daughter Deborah. His father is Col. Luis Alberto Rodriguez Lopez-Calleja, another member of the Military Junta and the man who leads the commercial arm of the Cuban military, which owns and operates all the official tourist, import, and export businesses on the island. (As an interesting side note, Lopez-Calleja’s cousin, Arturo Lopez-Levy, is a former Cuban military intelligence officer turned Cuban-American scholar and supporter of the Castro dictatorship here in the U.S. who is often quoted by the American mainstream media as a “sensible” member of the Cuban exile community.) Little Raul leads his grandfather’s security team, but there are some who feel that he is too young—though he is about the same age as Fidel was when he took control of Cuba in 1959.

It is very unlikely we will know who the true successor to Raul Castro will be until the Cuban government is forced to make an official announcement. But there is one thing we can be reasonably certain of: Barring the long-awaited fall of Cuba’s dictatorial regime, when the old guard passes away, Cuba will continue to be run by a dictator with Castro blood in his veins.