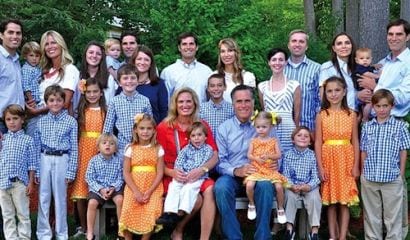 Former GOP presidential candidate Mitt Romney got under the craw of the liberal intelligentsia concerning his remarks about marriage during his commencement address to graduates at Southern Virginia University last month:

This is a promise: “Launch out into the deep, and your nets will be filled.” How do you do that? Well, getting married is one way to launch into the deep. I’m so glad I found Ann when I was still so young. Combining your life with another person, particularly someone—men and women as different as we are, this combination is tremendously challenging and enormously rewarding.

Some people could get married but choose to take more time, they say, for themselves. Others plan to wait until they’re well into their 30s or 40s before they think about getting married. They’re going to miss so much of living, I’m afraid. From the beginning of recorded time the prophet Adam recorded this life secret: “Therefore shall a man leave his father and his mother and shall cleave unto his wife.” Marriage is a gift from God. Now, some may dismiss the counsel coming from the Bible because it comes from a book which they’ve discarded. But the Bible is one of two things: either it’s the word of God, as I believe, or it’s the product of brilliant philosophers and sages who’ve observed lives and nations and civilizations and history over thousands and thousands of years. Either way, the Bible is a pearl of wisdom, the distillation of lessons of life. So when it says “marry,” listen.

Romney went on to state, “If you meet someone you love, get married. Have a quiver-full of kids if you can,” In essence, all the former Massachusetts Governor is saying is to “go forth and multiply.” This advice has been handed down to succeeding generations for thousands of years.

But as far as the liberal intelligentsia is concerned, Romney is a heretic. Jennifer Wadsworth, a blogger with the Times Union out of Albany, New York sniped, “Mitt Romney shared some questionable (though, if you’re into that biblical stuff, pretty righteous) advice with a gathering of college grads about how to live a full life.” Wadsworth went on to write:

It’s more than a little unsettling to hear a mainstream political figure referencing what’s widely considered a radical anti-feminist anti-family planning world view. It’s sweet that he commends his wife, Ann, for committing to being a full-time mom and housewife, but his culty language makes it all a little creepy.

During a panel discussion on CNN’s Piers Morgan Live, Columbia University professor Marc Lamont Hill called Romney “a religious fanatic who’s telling 21-year old college graduates to have binders full of children.” The View’s Joy Behar made it about Romney’s wealth. “He also has ten houses,” bellowed Behar. “Somebody’s who very rich can afford to say, ‘Have a quiver-full of kids.’”

If President Obama were to tell college graduates to get married young and have lots of children, the likes of Jennifer Wadsworth, Marc Lamont Hill, and Joy Behar would praise Obama’s wisdom and hail him as a model husband and father. They don’t really object to the advice. Rather they object to who is providing it.

And why wouldn’t Mitt Romney tell college graduates to marry young? He married Ann Davies at the age of 22. They became parents the following year and four other children followed. The Romneys have been married for 44 years and will remain married until death do them part. Marriage and family have done Mitt Romney a world of good.

Yet for all the good marriage has done for Mitt Romney, the cold fact is marriage isn’t for everyone. Can you say King Henry VIII? OK, we aren’t in the 16th century. But in the 21st century, many young people have grown up with memories of misery where it concerns their parents’ marriage (or marriages). Such experiences make some college graduates leery of entering into nuptials. What advice does Romney have for someone who is skeptical of entering into matrimony?

Conversely, there are young people who would like nothing more than to marry. But a college education guarantees neither prosperity nor a pleasing appearance. Suppose no one wants to marry you. What advice does Mitt Romney have to offer to a college graduate unable to find a bride or groom?

Whatever Romney’s advice might be, I think college graduates would be better served listening to him than to President Obama.