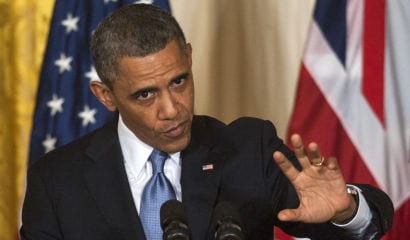 I am certain that a majority of conservatives would agree with the statement, “I don’t believe a word President Obama says.”

Alas, I am not amongst that majority.

Don’t get me wrong. I don’t believe a great deal of what Obama tells us. But there are times when I do believe him.

Now when I say there are times that I believe Obama, please let me make it clear that I am not in agreement with him nor do I mean to say those particular statements are either truthful or accurate. When I do believe what Obama says it is because I believe that he believes what he is saying.

For instance, during his joint press conference with British Prime Minister David Cameron at the White House on May 13th, Obama said that the IRS targeting conservative groups was “outrageous and there’s no place for it.” I don’t believe him.

Indeed, later that day during a speech at a DNC event in New York, when Obama told his audience that that there were Republicans who wanted to work with him but “were concerned about what Rush Limbaugh might say about them” and thus responsible for the “gridlock” in Washington. In this instance, I do believe him.

I believe that President Obama is convinced that Republicans are afraid of Rush Limbaugh and that Rush is the only thing standing between him and the passage of his agenda. This is, of course, nonsense. Obama had a Democratic Congress during his first two years in office. The President is giving Rush a power he does not have. But I have no doubt that he believes this to be true.

So when Obama accuses small town Americans of being bitter and clinging to guns or religion, I believe him. Or when Obama called his grandmother “a typical white person” during the Reverend Wright controversy, I believed him. Speaking of Reverend Wright, I also believed Obama when he said, “Here is what happens when you cherry-pick statements from a guy who had a 40-year career as a pastor.” But when Obama later said the Reverend Wright “was not the person that I met 20 years ago,” I didn’t believe him. Does anyone honestly think Obama never witnessed Wright utter an unkind word about America in all the years he attended Trinity United Church? To quote Hillary Clinton, it would require “a willful suspension of disbelief.”

When Obama said the Cambridge Police Department had “acted stupidly” when they arrested his friend Henry Louis Gates, Jr., I believed him. During the debate over the Arizona immigration bill, Obama said during a town hall meeting, “But now, suddenly, if you don’t have your papers and you took your kid out to get ice cream, you’re going to be harassed.  That’s something that could potentially happen.” Again, I believed him. So when Obama praises the courage of law enforcement officers, as he did at a White House ceremony earlier this month, I didn’t believe him.

When Obama said we needed to “make sure we are talking with each other in a way that heals, not a way that wounds,” following the Tucson shootings in January 2011, I didn’t believe him. However, a few months later, when Obama said Republicans wanted people to have “dirtier air, dirtier water and less people with insurance,” I believed him. Apparently, it’s OK for Obama or anyone else who supports his agenda to talk in a way that wounds, and if such talk wounds conservatives, then so much the better.

When Obama said during the 2012 campaign, “I believe that the free market is the greatest wealth generator ever devised by man,” I did not believe him. Since when has Obama supported free markets? So when Obama said, “If you’ve got a business — you didn’t build that. Somebody else made that happen,” I believed him.

Where President Obama is concerned, conservatives must paraphrase Shakespeare by asking, “To believe or not to believe?”