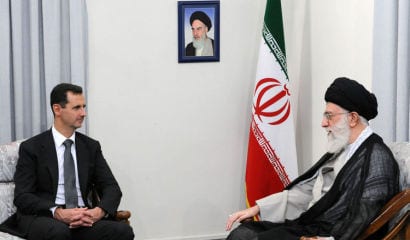 There is a scene in Ang Lee’s Civil War film Ride with the Devil, based on Ozark novelist’s Daniel Woodrell’s book, where a pack of rebel soldiers are asked why they are fighting jayhawkers along the Missouri-Kansas border instead of battling Yankees with the Army of Northern Virginia. Northern Virginia is not their country, they answer. Southwest Missouri is, and they aim to defend it to the death.

This kind of thinking seems quaint nowadays when “our country” no longer means a distinct region like the Ozarks or the Mississippi Delta or the Upper Peninsula, but 50 increasingly homogenized states spread over a quarter of the globe. Increasingly it is not Southwest Missouri or even the USA that we fight for; it is on the side of some rebel Islamic group (the Northern Alliance, the Libyan rebels, and, soon perhaps, the Syrian rebels), anywhere an uprising is brewing.

Ryan Crocker, who served as ambassadors to both Iraq and Syria, recently commented on America’s seemingly irresistible urge to get involved in the Syrian civil war: “[T]he pressure is growing to do something because that is what we do, we do things. But everything of significance I can think of doing is likely to make the situation worse, not better and put us in a worse position, not a better one.”

Crocker was only half right. The reason the interventionists are so gung-ho to get involved in Syria isn’t because that is what the world’s lone superpower does – we get involved. Nor is it democracy promotion. It is not because we have a moral obligation to stop the bloodshed (arming the rebels is likely to prolong the war and the suffering), nor is it because we will lose credibility after President Obama drew a red line in the sand. Intervention is not — as Sen. Lindsey Graham breathlessly insists — necessary because Assad’s eventual defeat will leave Syria a failed state with its chemical weapons up for grabs. Meanwhile Tehran will take our inaction for a lack of resolve, and move forward with their nuclear weapons program, leading to an eventual U.S.-Iran War.

NO, THE REASON America will intervene in Syria is that ending the 40-year Assad regime will remove Iran’s biggest regional ally and, the hope is, reduce Tehran’s regional influence. After all, Iran is the real enemy. Not Syria. In fact Syria hawks don’t give a damn about the Syrian rebels or the Syrian refugees or the Syrian expellees. They care only about Iran.

There is a relationship between what’s happening in Syria and Iran. We want very much to convince the Iranians to change their behavior, not just on Syria but on the nuclear issue. And one of the problems we have at this point is [that] they don’t believe that we will actually use force.… Our hesitancy in Syria, I think, plays to their perception that we won’t. So the more we’re prepared to do in Syria, the more I think we actually may affect the Iranian calculus in terms of the nuclear issues as well.

Not so fast, says Majid Rafizadeh, president of the International American Council on the Middle East. Rafizadeh says that even if Damascus were liberated, Iran would not be the loser:

Iran has strong political bonds with the Alawite leaders and community and is capable of creating a proxy as powerful as Hizbollah, or more so. An Alawite proxy could then instigate considerable amounts of tension throughout the region and keep Syria destabilized and in a civil war climate indefinitely.

Just what we need. Another quagmire.

Suppose, however, that Assad, with assistance from Russia, China, and Iran, is not defeated by the U.S.-backed rebels? Iran would be in an even stronger position, while America would appear weaker than ever. If Rafizadeh is right, win or lose, America will likely face either a quagmire or a grave loss of prestige.

Time to ask ourselves if it’s worth the risk.

3
Hither and Yon
‘Not This Time’: Standing Up to the Democrat Firing Squad
by Scott McKay