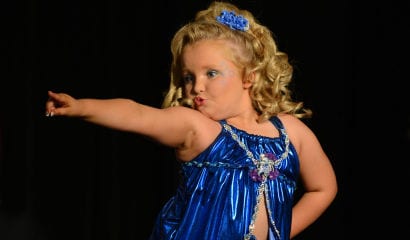 In their heyday, Nazi Germany and the Soviet Union dedicated entire industries to creating documentaries and animated films that showed the United States in its worst light: migrant worker camps, scenes of the 1932 Bonus Riot, soup kitchens and long bread lines transposed with glitzy scenes of decadent wealth.

Today, it is Hollywood that produces and exports such ugly American agitprop. That’s a good thing, writes Allison Yarrow in the Atlantic. Yarrow is especially proud of the reality show Here Comes Honey Boo Boo, which recently debuted on British television (subtitled, naturally) before dumbfounded English audiences. “This is exactly the kind of cultural product America should be exporting,” Yarrow writes. Tongue in cheek? Gonzo contrarianism? Sadly no. Yarrow is no liberal P.J. O’Rourke. She considers herself a serious social commentator.

For those who have better things to do than watch the so-called Learning Channel, Here Comes Honey Boo Boo documents the lives of seven-year-old aspiring beauty queen Alana (nicknamed Honey Boo Boo Child) and her white trash Georgia clan. Though family members reportedly earn $50,000 each per episode, the Beverly Hillbillies they are not.

In her praise of the show, Yarrow often sounds like she is describing The Waltons and not the Thompson/Shannon family. The show is a “fabulous cultural ambassador for America,” Yarrow writes, because it depicts how happy, unpretentious Americans handle widespread American problems. “These are appropriate heroes for a country struggling out of a recession,” she adds. One minute the Thompson/Shannon families are ambassadors, the next they’re heroes. Like Charles Lindbergh, but able to fart on command.

The “widespread problems” Yarrow mentions are the same troubles that affect much of the ineducable underclass, and not only in America, but equally in Britain, as shown in the brilliant essays of Theodore Dalrymple (Our Culture, What’s Left of It, Life at the Bottom). These are problems that are largely self-inflicted: drug addiction, teen pregnancies, dropping out of school, shacking up with abusive partners. However, the Brits have too much self-respect to export as cheap entertainment a reality TV show that mocks the pathologies of their underclass.

Ms. Yarrow labors under the impression that viewers tune in not because it is fun to ogle a clan of obese, gassy, mud-diving rednecks, but rather because “at its heart, here is a loving, American family that adheres to its own standard.” Rebels without a clue, one might say. What’s more, the show “humanizes” the national reality of obesity, while featuring among the most real, relatable, unpretentious Americans on television. This is a knock at another reality TV series, The Real Housewives of Orange County and who must handle their First World Problems. The difference is that audiences are not belittling the Real Housewives.

IN TRUTH, most of Honey Boo Boo’s 2.4 million viewers per episode tune in for the same reasons they tuned into watch MTV’s Beavis and Butthead or Jackass, i.e., to guffaw at one Southern family reinforcing the worst Southern stereotypes. Such programs do not in any way humanize the subjects — they dehumanize them, till they seem no more evolved than Neanderthals.

Far from being a “fabulous cultural ambassador,” Honey Boo Boo shows Americans to be cruel, sophomoric bullies, laughing at the pathological antics of our most disadvantaged, least intelligent citizens. It shows our Hollywood elite to be no more than decadent, greedy prostitutes who will happily make their country look foolish in the eyes of the world if there is profit in it. What the Honey Boo Boo creators have accomplished makes Stalin’s Ministers of Propaganda look like rank amateurs.