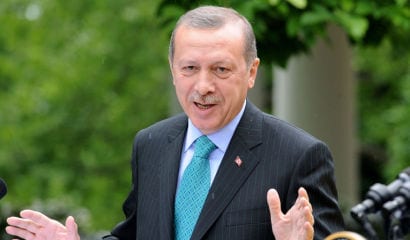 Protesters have taken to the streets in Istanbul, Turkey’s first city. The metropolis is a vibrant mix of cultures, as Byzantium lurks in the shadow of Islam. Geographically the city and country are divided between East and West by the Bosporus Strait. Politically Turkey is drawn by both the past and the future.

The planned demolition of a small park in central Istanbul triggered demonstrations in Istanbul. The heavy-handed response by Prime Minister Recep Tayyip Erdogan’s government spurred protests across the nation. Then came a flood of predictions that the “Turkish Spring” was set to sweep away yet another authoritarian regime.

Yet Erdogan’s Justice and Development Party (AKP) was democratically elected, triumphing in three straight elections, winning a larger portion of the vote each time. One reason for Erdogan’s success is that he has systematically dismantled the authoritarian, military-dominated system that controlled the Republic of Turkey since its founding in 1923.

Although liberal and secular elites worry that he is constructing a more Islamist and repressive system, Erdogan retains the support of his traditional political base. The prime minister has been weakened, but continues to dominate Turkish politics.

Modern Turkey was born out of the rubble of the Ottoman Empire, which collapsed at the end of World War I. Military leader Mustafa Kemal Pasha, played a leading role during the conflict’s tumultuous aftermath and became Turkey’s first president. He took on the name Ataturk (“Father of the Turks”) and his image still dominates the modern nation. His statue dots city squares and his photo adorns shop walls across the land.

Turkey’s capital, Ankara, hosts a massive mausoleum and memorial that covers an entire city block. Official honorifics are routinely piled upon any mention of his name. For years anyone disrespecting his memory or destroying objects with his image faced jail. Only in North Korea have I seen a similarly suffocating personality cult.

Ataturk was determined to modernize the country, turning ruthless nationalism and secularism into Turkey’s governing philosophy enforced by a one-party state. More genuine democracy emerged after his death but the military still dominated, staging three hard coups, the last in 1980, and a softer variant in 1997.

There should be no nostalgia for the “good old days.” The military jailed and tortured opponents. The generals even executed ousted civilian leaders in 1961. Ethnic minorities like the Kurds faced brutal military oppression; tens of thousands of people died and thousands of Kurdish villages were destroyed as the Kurds fought for autonomy. (In the view of Turkish officials there was no such thing as Kurds, only “mountain Turks.”)

The military decided security policy, such as the 1974 invasion of Cyprus, with a majority Greek population. Religious minorities, such as the Armenian and Greek Orthodox, found little space for views considered contrary to the Turkish identity. The public square was stripped of any form of the dominant Islamic faith; even the wearing of head scarfs at university was banned.

The Kemalist establishment ruthlessly suppressed freedom of expression, both political and religious. Mild doubts about repression in the name of Ataturk resulted in prosecutions, trials, and imprisonment of academics, journalists, and others. Talk to Turkish liberals — most anyone who believes in a generally free society — and you will find people who were prosecuted, fired, and threatened for their views. One prominent journalist told me he remembered his father being imprisoned for the crime of opposing military rule.

Most of this is gone, courtesy of Prime Minister Erdogan. Who, not coincidentally, himself was jailed and barred from office at one time.

Civilians run the government. The military has been tamed, with a coup now inconceivable. The war against the Kurdish minority has lapsed, with an ongoing attempt to reach a long-term settlement. Enforced worship of Kemal Ataturk has been scaled back. Restrictions on freedom of expression and religion have been loosened. The government is friendlier to private commerce than most of the Middle East, and the Turkish people have prospered as a result. There’s even social progress — when I visited in late 2011 several women praised the Islamic government for making limited but real progress in confronting gender-based abuse and violence.

In short, by almost every measure Turks are better off than before the AKP swept a decrepit and discredited coalition from power in 2002. Unlike the regimes threatened by the Arab Spring — the dictators of Tunisia, Egypt, and Syria, as well as the many archaic kingdoms which dot the Persian Gulf — Erdogan came to power legitimately and confronted abuses, particularly by Turkey’s so-called Deep State.

These accomplishments seem to escape most of his American critics. In fact, what disturbs many of them is that Ankara has begun charting a foreign policy independent to that advanced by the U.S. and Israel. As the civilians have taken control no longer can the Pentagon call the Turkish generals to win a course correction. There is as much to criticize in Prime Minister Erdogan’s so far maladroit attempt to turn his nation into a regional Weltmacht, but Turkey is entitled to make its own way.

More tragically, however, Prime Minister Erdogan has stopped acting as a liberator, and increasingly begun acting as oppressor at home. His government has used preexisting security laws to prosecute civilians, including many journalists, as well as military officers for alleged crimes, some going back many years. While those who in their time persecuted others deserve little sympathy, misuse of the law puts the liberties of all into jeopardy. Warned the U.S. State Department in its latest human rights report: “Broad laws against terrorism and other threats to the state and a lack of transparency in the prosecution of such cases significantly restricted access to justice.”

Particularly threatening is the prosecution of journalists. Last year the Journalists Union of Turkey counted 94 reporters in prison, while another group figured that number at 104. The New Yorker’s Dexter Filkins cited “an extraordinary climate of fear among journalists,” leading many editors to expressly discourage criticism of the prime minister.

Of course, the government claims that it is responding to real threats, and that those arrested are criminals, not journalists. I have found avid civilian defenders of the ongoing prosecutions. One university professor recently told me that there was no attack on journalistic freedom, since those being prosecuted had conspired with the military against the democratically elected government.

Yet the improbably vast sweep of the alleged Diyarbakir KCK (Kurdish), Ergenekon (nationalist), and Sledgehammer (military) conspiracies warrant more than a little skepticism. Roughly 500 people were arrested and 300 charged in the Ergenekon case alone. Some defendants have been detained for years. While some of those accused may have been guilty of some crimes, the chief motivation appears to be to break political opponents.

Equally worrisome is the public intimidation resulting from the wide-ranging prosecutions as well as overt assaults on independent media. The State Department concluded: “Journalists, academics, and authors reported self-censorship was common because individuals in many case were afraid that criticizing the state or government publicly could result in civil or criminal suits or investigations.” Minimal television coverage of the recent protests probably reflected this climate of fear.

Such claims obviously are difficult to prove. However, a number of Turkish liberals with whom I talked in recent years acknowledged their reluctance to publicly criticize the government. Businessmen also fear political retaliation. These people uniformly praise Erdogan for limiting state power and enhancing human rights. But most of them believed the government had changed direction. The majority now feared losing their companies, academic positions, jobs, and even freedom.

The most explosive charge is that the AKP plans to create an Islamic state. The party has purged some centrist members and Istanbul party chairman Aziz Babuscu was quoted in April as saying “The Turkey we will construct, the future that we will bring about, is not going to be a future that [liberals] will be able to accept.” (He later denied making these remarks, which were reported by listeners.)

Still, after a third election victory and decade in power the prime minister has yet to push such an agenda. This suggests that he may be what he seems to be: a moderate Muslim who wants to bend, not break, the secular Turkish state. The problem is what he has done, including the aroma of corruption that follows his government, is more than what he intended.

Turkey needs an Arab Spring, but within the democratic process. The principal political challenge in Turkey today is unaccountable political power, which polls indicate motivated most protesters to act. That can be achieved through the ballot box.

Despite some conciliatory rumblings by the president and deputy prime minister, Prime Minister Erdogan’s control over the AKP appears solid. Said Sinan Ulgen, a visiting scholar with Carnegie Europe, Prime Minister Erdogan “remains by far Turkey’s most popular politician.” Nevertheless, the latter’s arrogance may end up curbing his ambitions. Argued Turkish newspaper columnist Mustafa Akyol, the premier “will have to back off from the dreams of the all-powerful presidency he wanted to design for himself through a new constitution.”

Ironically, by breaking the military’s hold over politics Prime Minister Erdogan made further democratic transformation of Turkey possible. It’s up to the Turkish people to take advantage of that opportunity. They will decide on constitutional reform. They will vote in upcoming municipal, presidential, and parliamentary elections. If they choose, a “Turkish Spring” could either elevate an opposition party or coalition to power, or force the AKP to reform itself in order to retain power.

The decision is up to the Turkish people.