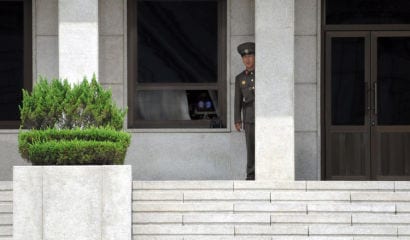 It wasn’t that many weeks ago when North Korea’s Kim Jong-un was threatening to nuke South Korea, the U.S., Japan, and the rest of the known world. Now his minions are preparing to chat amicably with representatives of Seoul about reopening the Kaesong Industrial Complex — unilaterally shut by the North during Pyongyang’s provocative spasm. The Republic of Korea should declare the facility permanently closed.

The so-called Democratic People’s Republic of Korea has been threatening the peace in Northeast Asia since its founding in 1948. The ROK was almost as truculent in its early years, but since has evolved into a democratic and capitalist state determined to avoid conflict at most any cost. In recent years the South veered towards ostentatious appeasement, showering Pyongyang with upwards of $10 billion in aid and investment.

The objective of the so-called Sunshine Policy was to encourage reform and disarmament by gaining the North’s friendship — à la the famous parable about how the sun is better than the wind at getting someone to loosen their coat. Alas, the DPRK took the money and continued developing nuclear weapons. Whatever mistakes one wants to ascribe to U.S., South Korean, and Japanese policy toward North Korea, the most fundamental problem is that officials in the North, at least those in charge, apparently do not want to reform.

Andrei Lankov, a former Soviet student in Pyongyang who now teaches in Seoul, makes a convincing argument that the Kim family criminal enterprise, otherwise known as the North Korean government, believes that economic reform would threaten its survival. In Russia old Soviet apparatchiks were able to grab control of new enterprises. In the DPRK, however, South Korea would swallow the whole nation, with the latter’s elite more likely to end up on trial, if not hanging from nearby lampposts.

Thus, the North’s consistent objective has been to squeeze cash out of someone, anyone, in order to preserve the regime. It doesn’t matter that people outside the DPRK believe that Pyongyang “must” reform to prosper in today’s world. That is not the North Korean ruling class’s objective. It wants to survive, which means the North cannot trade away its nuclear arsenal, pull back its advanced conventional forces, or implement fundamental economic reform. All Kim & Co. can do is attempt to extort money out of the North’s neighbors and anyone else foolish enough to pass the hat.

Unfortunately, the ROK always is first in line. At the end of May Seoul insisted that before reconvening the Six-Party nuclear talks, “North Korea must demonstrate its sincerity through action by honoring its international obligations and promises regarding denuclearization.” However, when Pyongyang proposed negotiations about restarting the flow of South Korean cash, the Park government immediately accepted.

On Sunday and Monday, South and North Korean officials met at Panmunjom in the Demilitarized Zone to discuss the agenda for higher-level talks set to begin in Seoul on Wednesday. Chun Hae-sung, one of the three South Koreans at the preparatory meeting, declared the desire to “build trust” with the North as part of President Park Geun-hye’s declared policy of “trustpolitik.”

It isn’t just the South where hope appears to be triumphing over experience. UN Secretary-General Ban Ki-moon claimed, “This is an encouraging development toward reducing tensions and promoting peace and stability on the Korean peninsula.” The State Department declared, “We support and have always supported improved inter-Korean relationships.” Newspaper headlines in America declared that both antagonisms and tensions were abating.

More accurate would be to say that the North pushed the “off” button after ramping up tensions. The underlying antagonisms and tensions will persist as long as the Kim gang relies on threats to survive.

The North’s nuclear program won’t be on the agenda for the upcoming talks. Instead, top of the list likely will be the KIC, which employs 53,000 North Koreans and generates $90 million in salary revenue annually for the DPRK (which doles out a pittance of that to the workers). Pyongyang also wants to discuss revival of tours at Mount Kumgang, which were suspended in 2008 after a North Korean soldier shot dead a South Korean tourist, who supposedly wandered into forbidden territory.

KIC is the last element of the Sunshine Policy, kept alive because South Korean companies invested almost a billion dollars to create the industrial facility. Even then-President Lee Myung-bak, who ended most other aid, couldn’t bring himself to close down the complex after the North sank a South Korean naval vessel and bombarded a South Korean island in 2010.

What possible argument is there for keeping the subsidies going after Kim Jong-un’s recent fire-and-brimstone tirade? South Koreans are putting money into the hands of the North’s barbaric elite which is threatening to destroy the ROK. Every won sent north can be used to add more nuclear weapons, miniaturize nuclear bombs, and extend the range of nuclear-capable missiles.

The argument that making North Korean officials feel warm and fuzzy will convince them to cast off their collective security coat has been disproved by experience. Lankov still argues that in the long-term the subversive impact of KIC on the North Korean population makes it worth the cost. That might be true if the money didn’t act as a direct subsidy for the regime. Cutting the North’s financial windpipe would seem to be a better strategy.

President Park should demonstrate that she is made of sterner stuff than the Kim gang apparently thinks. While she should welcome humanitarian initiatives, such as family reunions, she should indicate that Pyongyang can expect no benefits for softening its tone. To the contrary, her people continue to wait for apologies for the murdered South Korean in 2008, the military and civilian casualties of 2010, and the companies forced to stop production at KIC this year.

Absent a serious and continuing commitment by Pyongyang to deescalate tensions, she should announce that her government intends to pay off the firms that invested in KIC and hang a shuttered sign on the facility. Moreover, there’s not the slightest chance of restarting the Mount Kumgang resort so long as tourists must fear for their lives. And there certainly won’t be any money, food, or fertilizer going north while those begging for help talk of turning their benefactors’ homes into a “lake of fire.”

In other words, Kim Jong-un should “pound sand.”

Of course, Seoul is entitled to set its own policy. If it wants to pay protection money, that is a decision for the South Korean people. Maybe bribes will keep the DPRK bullies at bay. On the other hand, continuing to subsidize the North likely will extend the life of the Kim regime. Which means the South could have to live in the shadow of a confrontational and unpredictable nuclear power for years, even decades, to come.

Moreover, since the Korean poker game appears likely to go on and on, South Korea needs to become a better player. At this stage Seoul is predictable — no matter what the North does, the ROK will be conciliatory. It’s an understandable position given the damage conflict would impose, but it encourages Pyongyang to be ever and increasingly confrontational. Which creates a growing risk of conflict from mistake or misjudgment.

The U.S., too, should set its own policy. Which in this case should mean no defense subsidies for a government which underwrites its enemy.

It has been years since there was a plausible case for Washington to defend the South. After all, the ROK has around 40 times the GDP of the North, as well as twice the population. Pyongyang has but one ally, China, which isn’t likely to go to war for North Korea, especially if the latter started the conflict. The DPRK has a lot of ill-trained soldiers and antiquated weapons, but little ability to sustain its forces. If Seoul didn’t choose to save money by relying on America, the former easily could create an adequate deterrent force.

There certainly is no case for the U.S. to protect a nation that is paying off its chief antagonist. It is one thing for the South to help North Korea build weapons that could kill South Koreans. It is far worse for the ROK to pay North Korea to build weapons that could kill Americans seeking to protect the South. Seoul is free to adopt any policy it wishes, but it should bear the consequences of whatever choice it makes.

Washington should wish the Seoul well. More important, the U.S. should begin the process of disentangling itself from the Korean peninsula. American troops should come home; America’s defense guarantee should end. Then the ROK could decide whether its defense is better served by providing millions of dollars for South Korea’s or North Korea’s military.