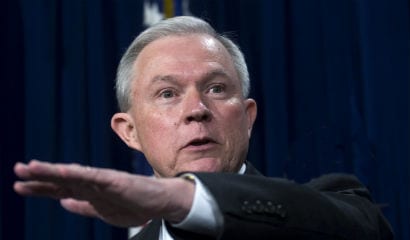 A top-shelf gag of Evelyn Waugh’s, often misquoted, is recorded in the old misanthrope’s diaries. Upon learning that a benign tumor had been removed from Randolph Churchill’s lung, he remarked to a friend that “it was a typical triumph of modern science to find the only part of Randolph that was not malignant and remove it.”

I thought of this line the other day when I read an editorial by a functionary of one of the tax-cut pressure groups. The would-be columnist called Senator Jeff Sessions of Alabama, among other things, a union stooge and a hypocrite — the latter, one gathers, due to his opposition to his colleagues’ attempts to amend the so-called “Gang of Eight” immigration bill. Sessions has spent the last week drawing attention to everything that’s wrong with the bill in its current form, which is to say, everything: it’s expensive (though how expensive we don’t know); it will give permanent status to as many as 30 million people (though its sponsors won’t admit this); it doesn’t secure the border (it’s weaker in terms of border security than previous failed attempts at immigration reform); it doesn’t prevent illegal immigrants from receiving welfare benefits immediately or force them to pay every cent they owe the government in back taxes before they receive permanent or even semi-permanent status; and it doesn’t commit the United States to a stricter deportation policy for future illegal entrants. (Readers interested in learning more about the bill should have a look at my short profile of Senator Sessions, which will appear in the July/August double issue of The American Spectator.)

For what it’s worth, the editorial writer declared the original version of the bill unworthy of support. He wanted it amended thoroughly. “But,” I started thinking, “this doesn’t make sense. I’m no doctor, but if the whole thing is cancer-ridden, why should anyone think that we can cure it by just cutting piecemeal?” (Not a euthanasia advocate myself, I can see that my carcinomatous metaphor is about to break down. Oh well. ) No: we should just let the body die. Put it out of its misery.

Is this what Sessions has in mind? When I spoke with him for 30 or so minutes last week, he didn’t say so in so many words. But he did say that he thinks opponents of the bill, which he says “has a series of fatal flaws,” should “slow down a little bit, and try to get people to focus on the weaknesses of the bill.” He also made it clear why he’s skeptical of the amendment process: “[The bill] has got politically correct status behind it. There’s a lot of pressure to move it. The sponsors would like to see a few modest amendments that appear to be significant, that really don’t fix the weaknesses, and then push it through.”

I asked Sessions why some Republicans are so eager to line up behind the bill. “I think,” he said, “that Republicans are really anxious to appeal to the Hispanic community, to immigrants. They believe in trade, and they believe in immigration, and so they’ve been reluctant to be seen as saying, ‘It’s time to end the lawlessness, it’s time to create a lawful system.’”

Border security and the rule of law aside, Sessions is also concerned about unemployment and the stagnancy of American wages. He points out that many blue-collar workers have few opportunities for employment and that many of them are not being paid particularly well for the work they can find. If, he says, we want more Americans working, and working at higher wages, then the last thing we should do is expand the labor force by a figure that might be as high as 10% of our current population.

“If you can’t get somebody to do work for you at one wage,” he said, ”you have to keep raising the wage until you get somebody willing to do the work. Now, why would you prefer to work at Wal-Mart rather than go out and work construction if it doesn’t pay more? Why shouldn’t the construction worker be paid more than somebody who works inside at Home Depot?”

Sessions’s emphasis on the welfare of working-class Americans is as pragmatic as it is principled. “Republicans have to understand that we lost this past election primarily between people who make $20-45,000. We had a record-low vote among the people making those kinds of wages.” When I sat down with him he execrated — or came as close as someone of his sanguinity can come to execrating — business elites who value profits and growth at the expense of their blue-collar employees’ well-being. “At some point,” he said, “American workers have to make a decent salary.”

The above should make it clear that Sessions is, somewhat strangely in a party that increasingly finds itself moving not so much to the right as to the top of the political diamond, a true conservative populist. While his populism may help to explain why he is the object of so much libertarian stone slinging, it does not, I think, quite justify charges of “hypocrisy.” Whatever one thinks of his principles, and, indeed, whatever one thinks of the “Gang of Eight” bill (read it here if you’ve got a week and nothing better to do), Sessions is a principled politician, and, in his way, a shrewd one. Just how shrewd we’ll learn in a few months, when the Senate votes yes or no on the bill he’ll likely be doing his best to derail.

As Sessions said himself when I asked him last week about the coming months, “It’ll be interesting.”