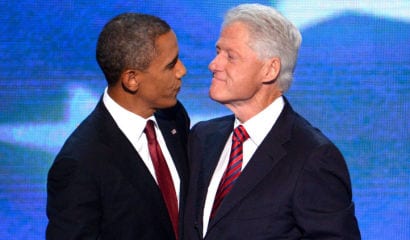 Despite his evident reluctance to take America into the Syrian civil war, President Barack Obama appears to be traveling down that road step-by-step. He has decided the U.S. will provide weapons to the insurgents. If that action fails to transform the conflict, he will face increasing pressure for Washington to do more. And if he does, he risks involving the country in another senseless conflict — and ruining his presidency in the process.

It may be pure coincidence, but the president acted only after Bill Clinton warned that the current occupant of the Oval Office could end up looking like a “total wuss” and being “lame” if he did not intervene in the Syrian killfest. Clinton compared the latter to his decision to bomb Serbia over its rule in Kosovo. If he hadn’t acted, said the former president, critics might have complained: “You could have stopped this by dropping a few bombs. Why didn’t you do it?” Of course, Clinton ignored the fact that the triumphant ethnic Albanians then engaged in their own campaign of ethnic cleansing — while U.S. troops were occupying Kosovo.

Clinton also said that the president risks looking like “a total fool” if he acts cautiously in response to opinion polls. In Clinton’s view, overwhelming public opposition only means people want the president to be cautious. But if Americans really believe a military action to be stupid — that there is no reason for their sons, brothers, husbands, and fathers to die in a Quixotic crusade cooked up by ivory tower generals — any military adventure will be unsustainable and will fail, perhaps disastrously.

Of course, former president Clinton always has had a curious view of the purpose of war. He once expressed his frustration that he likely would not be considered a great president without prosecuting a war. And Kosovo didn’t count. Leading the world’s most powerful alliance against lonely Serbia, bombing for 78 days from high altitudes to avoid casualties while killing hundreds or thousands of civilians, and ignoring atrocities by America’s allies didn’t make him into a hero anywhere other than downtown Pristina, where his statue stands.

Apparently President Obama took Clinton’s remarks seriously. Presidential press secretary Jay Carney said the latter had offered “valid” opinions and that the president “welcomes the input of every individual out there.” That’s yet another big mistake by President Obama.

There’s no need to refight the foolish Kosovo intervention or debate the wisdom of following President Ronald Reagan’s Lebanon misadventure by jumping into another Middle Eastern civil war. Let’s just consider the image of Bill Clinton accusing another president of looking like a “total wuss” and “a total fool” and being “lame.”

No, I’m not talking about cigars and dresses, and storied assignations in and out of the Oval Office. Nor extraordinary cattle trades, subpoenaed evidence turning up in the White House residence, dubious investment schemes, and so much more. I’m thinking about would-be Field Marshall Clinton, insisting that “it’s just best to get caught trying” to use the military to repair failed foreign nations, who when his nation called him to serve in a similarly messy conflict more than four decades ago turned out to be “lame” and look like a “total wuss” and “a total fool.” I’m thinking about the draft avoider/evader Bill Clinton.

Vietnam was a stupid war in which tens of thousands of fine Americans died as a result of dumb decisions by foolish Washington policymakers. The latter included both Democrats and Republicans. I respect those who served; I don’t blame those who avoided serving. Happily I turned 18 after the draft had ended and U.S. troops had gone home. Thus, I did not face the dilemma of what to do. And, frankly, I have no idea what I would have done.

But we know what Bill Clinton did.

In 1964 he went to Georgetown University and received a 2-S student deferment. Alas, all good things come to an end. As he neared graduation four years later his classification was changed to 1-A, making him a prime candidate for conscription. Then ensued months of complicated machinations involving his uncle, Arkansas Sen. J. William Fulbright, the chairman of the local draft board, the commander of the local Naval Reserve unit, Col. Eugene Holmes, head of the University of Arkansas ROTC program, and various other people. The details are contested and the truth long ago was lost to time, but events do not place the young Clinton in a good light.

He certainly avoided (legal) and perhaps evaded (illegal) the draft. After lots of maneuvering when he didn’t show up for induction while employing various stratagems to keep the draft board at bay, he was admitted to the University of Arkansas ROTC program, which earned him a deferment and the classification of 1-D. But he didn’t enroll as promised, heading off to Oxford University instead. He was reclassified 1-A, but Selective Service’s move to a lottery, and his high number (311), kept him out of uniform. Afterward he wrote Col. Holmes a letter thanking the latter for his assistance.

It’s actually a thoughtful missive in some ways. For instance, Clinton argued that “No government really rooted in limited, parliamentary democracy should have the power to make its citizens fight and kill and die in a war they may oppose, a war which even possibly may be wrong, a war, which in any case, does not involve immediately the peace and freedom of the nation.” Looking back it really is hard actually, impossible in my view — to justify conscripting young men to fight in Vietnam.

However, Bill Clinton couldn’t help but demonstrate that he was lame and look like both a wuss and a fool. After lauding friends who made tough decisions and paid the penalty (conscientious objectors and resister), he admitted that he took a different course, requiring decisions that “were the most difficult of my life.” Why did he eschew forthright opposition? He said he wanted “to maintain my political viability within the system. For years I have worked to prepare myself for a political life characterized by both practical political ability and concern for rapid social progress.”

He went on to describe his “anguish,” loss of “self regard and self confidence,” sleeplessness, compulsive eating, and “exhaustion.” After which he hopped onto a plane to England, without contacting either Col. Holmes or the local draft board. He didn’t do so, he explained, “because I didn’t see, in the end, how my going in the army and maybe going to Vietnam would achieve anything except a feeling that I had punished myself and gotten what I deserved.”

Col. Holmes, a decorated officer who suffered through the Bataan Death March and three and a half years as a Japanese POW, was in ill health during Clinton’s presidential run and issued only one statement about the affair. It was not flattering. He said that he believed Clinton “purposely deceived me, using the possibility of joining the ROTC as a ploy.” Holmes went on to accuse the future president of a “lack of veracity” and purposeful fraud, and raise doubts about Clinton’s “patriotism and his integrity.”

Looking back on the Clinton presidency, it’s hard to disagree with Holmes’ assessment.

But that’s not the most important point. Bill Clinton is warning Barack Obama that the latter could be lame and look like a wuss and a fool if he doesn’t drag America off to war. Bill Clinton?

Intervening in Syria is a serious mistake. The U.S. has no interest at stake that warrants entanglement in another Middle Eastern civil war. President Ronald Reagan learned that lesson three decades ago and responded appropriately, by getting out fast.

It’s bad enough if President Obama made his decision because he genuinely believes that the U.S. needs to fight another war in another Muslim nation. It’s far worse if the president acted to ensure that he doesn’t look like a wuss and a fool. For there’s no bigger wuss and fool than someone who allows Bill Clinton to manipulate him into going to war.