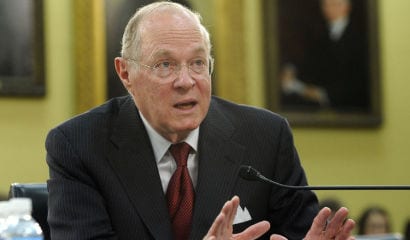 Supreme Court Justice Anthony Kennedy became public enemy number one last week among conservatives after writing the majority opinion in U.S. v. Windsor which struck down Section 3 of the Defense of Marriage Act (DOMA). This section defined marriage as the legal union between one man and one woman.

Conservatives took offense against Kennedy for declaring DOMA “invalid, for no legitimate purpose overcomes the purpose and effect to disparage and injure those whom the State, by its marriage laws, sought to protect in personhood and dignity.” There were also objections to Kennedy’s use of words such as “condemn,” “demean,” and “humiliate” in describing the purpose and effects of DOMA.

The most prominent of these conservatives was Kennedy’s Supreme Court colleague Justice Anton Scalia who wrote in his dissent:

It is true that defending traditional marriage in of itself doesn’t necessarily “condemn, demean, or humiliate those who would prefer other arrangements.” However, this simply cannot be argued when it comes to the enactment of DOMA and its raison d’être. After all, when DOMA was being debated in Congress in 1996, the House Judiciary Committee proclaimed:

[C]ivil laws that permit only heterosexual marriage reflect and honor a collective moral judgment about human sexuality. This judgment entails both moral disapproval of homosexuality and a moral conviction that heterosexuality better comports with traditional (especially Judeo-Christian) morality.”

Indeed, two years after the passage of DOMA, then Oklahoma GOP Senator Don Nickles (who sponsored the legislation in the Senate) opposed President Clinton’s nomination of James Hormel as Ambassador to Luxembourg because of his homosexuality. Nickles said of Hormel at the time:

It is easy to pillory Justice Kennedy for his opinion. Yet Kennedy would not have written this opinion if not for a dispute between a citizen and the IRS. Edith Windsor and Thea Spyer met in 1963 and became a lifelong couple. They married in Canada in 2007. Upon Spyer’s death in 2009, Windsor inherited her estate and subsequently claimed estate tax exemption for spouses. However, the IRS disallowed her claim on the basis of Section 3 of DOMA, which forced Windsor to fork over $363,053 in tax on the estate.

Surely those who supported DOMA in 1996 could have foreseen such a scenario coming to pass. If not for DOMA, Windsor would not have been on the receiving end of such injurious treatment by the IRS. Given the injurious conduct of the IRS towards conservatives, I would like to think conservatives would have some measure of sympathy for Edith Windsor. Or does conservative distaste for gay marriage outweigh conservative distaste for the IRS? Do those who supported the passage of DOMA in 1996 to convey moral disapproval of homosexuality and still support it today believe Windsor to be an immoral person and thus unworthy of their sympathy?

So long as Justice Scalia insists on ignoring the historical context that brought about DOMA and its consequences, I am left with no choice but to conclude that he is wrong in his judgment concerning U.S v. Windsor and that Justice Kennedy is right.