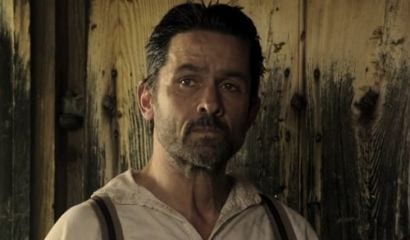 We think of The War Between the States as a conflict that tore families apart, a war in which brother fought against brother, and whole Southern cities were burned to the ground. But the war had a devastating impact on Northern communities too.

One such community, The Corners, is the setting of a new movie by Ron Maxwell, director of the classic Civil War films Gettysburg and Gods and Generals. Set in upstate New York, Copperhead is the tale of two families, the Beeches, the lone Peace Democrats in a village of Lincoln-supporting unionists, and the abolitionist Hagadorns, who see in the war the best chance to abolish the great evil of slavery.

More than a mere Peace Democrat, Abner Beech (Billy Campbell) is a localist and a pacifist, the kind of man Wendell Berry might write essays about. In the film’s key exchange, Abner is asked by Avery, the village blacksmith (Peter Fonda), if the union means nothing to him. “It means something,” Abner says. “It means more than something. But it doesn’t mean everything. My family means more to me, my farm, The Corners means more. York State means more to me. Though we disagree, Avery, you mean more to me than any union.”

The union is certainly not worth the death of 700,000 boys and men, not to mention the Lincoln administration’s numerous and repeated violations of the U.S. Constitution. Americans like to think the Constitution is sacred, but that seems to be the case only when times are good, and those few times when peace reigns. Of course, during the War Between the States (or many subsequent wars, for that matter) such treasonous talk from the loyal opposition could get a man thrown in the hoosegow, or tarred, feathered, and ridden out of town on a rail by his erstwhile friends and neighbors.

Abner Beech’s strength is his willingness to suffer any abuse for his beliefs. Nor is abuse in short supply. Beech is vilified. His party is demeaned in Sunday sermons. His neighbors refuse to buy his milk and lumber. His hired hand’s voting privileges are revoked. All of this steels Abner in his conviction that war is an unmitigated evil, for even on the home front it acts like a fever that deranges men.

SCREENWRITER Bill Kauffman, a columnist for the American Conservative, adapted Copperhead from an 1893 novella by Harold Frederic. The novel sold poorly in its time, no doubt because it failed to appeal to Lincoln groupies or Southern romantics. (I suspect that 120 years later the film may suffer the same undeserved fate.) Kauffman’s adaptation, however, serves as the perfect vehicle for his own particular brand of anti-war regionalism, which he has chronicled extensively in such books as Look Homeward, America, Ain’t My America, and America First.

Historically challenged critics accuse Copperhead of going soft on slavery. Alyssa Rosenberg, in ThinkProgress, chastised Maxwell and Kauffman for their sympathetic portrayal of copperheads. “In its advertising [Copperhead] is hiding the uncomfortable truth of the copperheads’ acceptance of slavery,” she writes.

Admittedly, Beech, who has never seen a slave, has little to say about the peculiar institution, and much to say against the abolitionists who insist on dragging his town, county, and state to war. Copperheads often did support slavery, but copperheads were not a monolithic bloc. There were Jacksonian Democrats, like Abner Beech, who believed secession was lawful because the Constitution says nothing about the terms of membership in the union. There were the German Catholic and Irish immigrants who opposed the Republican Party for its embrace of the anti-Catholic immigrant, pro-temperance nationalists. And there were the former Southerners who moved north. It is the latter who were most likely to support slavery.

Doubtless the Abner Beech of Frederic’s novel a flawed character. He is not easy to love. He is mule-headed, naive (he thinks an armistice is a real possibility), and a fervent anti-abolitionist. But of what interest is a character who is not flawed? Beech is real for his time and place. Kauffman and Maxwell have altered Beech somewhat to mirror their regionalist, non-interventionist views. Hence, their Copperhead is not another Lincoln hagiography, but a film about love of place, love of the Constitution, and the difficulty of following the Nazarene’s injunction to love one’s neighbor. That is the film’s great contribution.