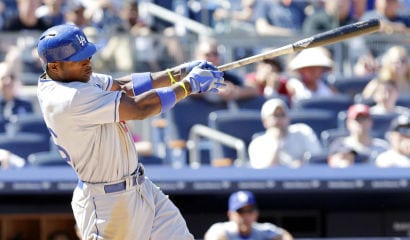 Who is the biggest star in Hollywood today? He is bigger than Brad Pitt, whose zombie movie is not as undead as he would like. This star is even bigger than Bogart was back in his day. HINT: his name rhymes with a great Bogart character, created by Herman Wouk. One, two, three… time is up!

The correct answer is Yasiel Puig, last name pronounced Pweeg, the newest Los Angeles Dodger. He does not act in movies, unless they are video montages on Baseball Tonight. Yet his entire on-field persona is a bravura piece of performance art. He is creating a role for himself unlike anything we have seen in American professional sports in recent years. Amazingly, he is succeeding on three separate fronts simultaneously. At one and the same time he is producing as a player, he is inspiring his team, and he is exciting the spectators.

He did not start the season with the big club and his minor league numbers were solid but not spectacular. He did well enough to gain a promotion in late May but his advent was not hailed with the Messianic hype accorded in recent years to prospects like Bryce Harper and Mike Trout. The Dodgers were limping badly through the first two months of the season, with stars Hanley Ramirez and Matt Kemp battling injuries. They played a stolid, phlegmatic brand of baseball, hardly suited to the City of Angels and Tinseltown.

Then the kid with the funny name showed up and lit a spark. Here are his ridiculous numbers for 29 games in the big leagues. He is hitting .429, which translates to 3 hits every 7 at-bats. You might see an average like that on a player who gets off to a nice start and goes 6 for his first 14 or 9 for 21. But he has 112 official at-bats already, with 48 hits! These include 7 doubles, a triple and 8 home runs. He has scored 22 runs and knocked in 18. He also has stolen four bases.

His fielding has for the most part been wonderful as well. He has thrown out several runners with incredible pegs. He is leaping against walls to make catches and diving in all directions. All in all, by the statistical measures of achievement in baseball, he rates high indeed, almost impossibly high. Fidel Castro must be gritting his teeth for letting this kid escape Cuba as a teenager.

Yet his contribution to the team’s turnaround owes more to the psychological realm than to the numerical. He has brought an over-the-top level of risk-taking to the game, and although he pays a price now and then, the positive impact has been enormous. The other night, he was standing on second base when the next batter hit a bouncer into the hole between first and second. The first baseman went to his right to backhand the ball, then swiveled to flip to the pitcher covering first for the out. Instead of merely advancing to third base, Puig raced all the way home. By the time the pitcher realized what was happening, he turned around and unleashed a wild throw past the catcher. It was against every conservative instinct to do what Puig did, and the odds were heavily stacked toward failure, but the human element prevailed.

Consider this conversation I heard between two sportscasters in a different city. The first one said that Puig, in his first game ever at Yankee Stadium, had tried twice to turn a routine single into a double, succeeding on one of two attempts. The other announcer replied, “Well, obviously he made it the first time so he foolishly tried it again.”

“No,” came the response. “Actually he did not make it the first time, so he surprised them by trying it again and believe it or not, it worked!”

To show you the effect his heroics have had on his teammates, here is something Matt Kemp did one night last week. He singled, stole second, stole third and then raced home on a mid-depth outfield fly. That kind of speed demon performance is usually reserved for speedy little guys who have to justify their presence in the big leagues by making something out of nothing in that way. When a star power hitter like Matt Kemp does that, it shows you that a devil-may-care atmosphere has been created in the clubhouse and it is igniting the squad.

Eat what’s left of your heart out, Fidel.