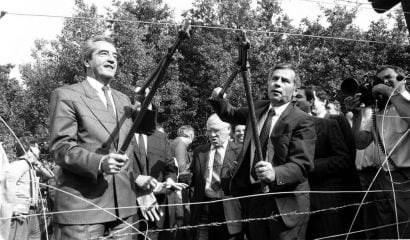 Today’s collegians weren’t even born when the Berlin Wall existed. Those of us who are a bit older remember when East Germany shot down citizens seeking to escape communism’s not-so-loving embrace. The year 1989 seems long ago, but it remains a glorious triumph for human liberty. The Wall fell, after which the Soviet empire in Eastern Europe disappeared.

One of the men who hastened the end of communism was Hungarian Gyula Horn. He was born in a nation that went through fascism, alliance with the Nazis, and “liberation” by the Soviets, before ending up as one of Moscow’s most obedient satellites. He graduated from college in 1954 and fought on the wrong side of the Hungarian Revolution, joining a militia that hunted down revolutionaries. He then made his career in Janos Kadar’s Hungarian Socialist Workers’ Party, which took power atop Soviet tanks.

In the succeeding years of “Goulash Communism” Hungary did better than most of its communist neighbors. Kadar mixed economic liberalization with political repression, allowing the Hungarian people to decorate their prison cells with finer furniture and more attractive drapes.

In this system Horn prospered, seemingly an obedient apparatchik. By 1989 he was foreign minister in the last communist government in Hungary. However, Hungary was changing and he changed with it.

As the 1980s dawned Hungary’s economy was suffering. More important, Mikhail Gorbachev’s rise in the Soviet Union shook the foundation of East European communism. By 1988 events had superseded Kadar, who was deposed by an increasingly restless communist party.

In June 1989 Imre Nagy, the great Hungarian patriot who led the bloody battle for freedom against Moscow in 1956, was reburied on the 31st anniversary of his execution by Kadar. Nagy’s body had been dumped in an unmarked grave, but this time received a hero’s memorial. Reform communist Imre Pozsgay had earlier challenged party orthodoxy, calling the revolution a “popular revolt.”

Soon plans were made for multi-party elections. The communist party dissolved. And the Red Army stayed in its barracks, in contrast to 1956.

Particularly significant was Budapest’s decision to tear down the Iron Curtain. Until then East Europeans were largely free to travel on holiday within the Soviet bloc. They still lived in a prison, but at least it was a relatively large prison. Loyal communists could enjoy the delights of neighboring poor and oppressed nations.

The reformers relaxed restrictions on travel by Hungarians the year before. The government then decided to tear down Hungary’s “wall” — far less fearsome than the East German variety — which separated Eastern and Western Europe. In February Foreign Minister Horn traveled to Moscow to inform Gorbachev of Budapest’s plans. On June 27 Horn joined Austrian Foreign Minister Alois Mock to officially cut the barbed wire separating their countries. In fact, a section of the old fence had to be restrung for the event, but the theater was worth the price of admission. Horn later said that his objective was to create “an irreversible situation.”

With the acquiescence of Hungarian border police, East Germans began to cross into neighboring Austria. In September Horn formally announced that the border was open. East Germans also flooded into Prague, where another communist party was tottering, and filled the West German embassy, demanding asylum. Suddenly the Iron Curtain was no more. To control its population East Germany would have to build a wall with its communist neighbors, creating a much smaller national prison.

Demonstrations mounted across that country and the East German leadership gave way, preferring to depose party boss Erich Honecker than shoot down protestors as he demanded. On November 9 the Berlin Wall opened, never to again close. The rest of the Evil Empire, including, most importantly, the Soviet Union, ended up in history’s trash can.

Many reformers, like Pozsgay, were cast aside in the turbulent democracy that followed. However, in 1990 Horn became chairman of the Hungarian Socialist Party, which replaced the communist party, and in 1994 became prime minister after winning the parliamentary election. In office he enacted serious reforms mixing industrial privatization with budget austerity. To help overcome opposition from the left of his party he brought the market-friendly Alliance of Free Democrats into coalition. Horn declared in Time magazine: “We are wiping away the last remnants of Kadarism and putting an end to the patronizing role of the state.”

Four years later he lost to Viktor Orban and in 2002 left politics. In recent years Horn has been in ill health and made his last public appearance in 2007. He died last month.

Horn’s record remains tainted by his work against the 1956 revolution, for which he never apologized. But much can be forgiven for his later service.

As premier he proved to be a greater market advocate than many conservative reformers. More important, the election that brought him to power was held only because he and others peacefully dismantled Janos Kadar’s “mini-me” Stalinist political controls.

Finally, Horn’s snipping of the barbed wire that for decades had hemmed in millions of East Europeans was perhaps the single most important action — after Mikhail Gorbachev’s adoption of the “Sinatra Doctrine,” allowing the satellites to do it their own way — that made Eastern Europe’s transformation irrevocable. Once the communist barrier to the West had been ripped open, every regime within the Evil Empire was doomed. Horn’s “courageous work as Hungarian foreign minister will remain unforgettable to us Germans,” observed German Foreign Minister Guido Westerwelle.

There are many heroes in the long struggle against communism, including Ronald Reagan and numerous courageous defenders of liberty and human rights throughout the Evil Empire who died before the final victory 24 years ago. Among the most important reformers of 1989 was Gyula Horn. May he rest in peace.