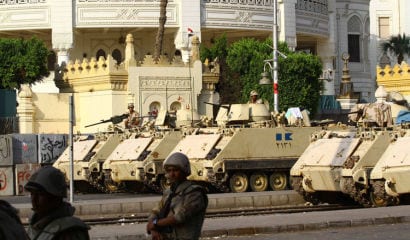 There are many grand failures of U.S. foreign policy. Egypt has joined the pantheon, with Washington seemingly under attack by every faction in Cairo.

Egypt long has been a national wreck. Its recent history featured rule by an indolent king and a leftish Arab nationalist. A couple of authoritarian generals followed. The economy was ruined by dirigisme economic plans, endless bureaucratic incompetence, and pervasive political corruption.

Washington was only too happy to go along in the name of “stability” since Cairo backed U.S. policy and preserved peace with Israel. This ugly Realpolitik persisted even after the Cold War ended and the Bush administration launched a war to end tyranny and promote democracy.

This was not what Washington desired, but Egyptians weren’t concerned with what Washington desired. Mubarak’s fall led to the election of the Muslim Brotherhood’s Mohamed Morsi and approval of an Islamist-oriented constitution. Both were flawed, but both were approved democratically. Washington had no choice but to accept Morsi’s rule, after spending decades supporting autocrats who had suppressed the Brotherhood.

After just one year of Morsi’s presidency, millions of Egyptians answered a variant of Ronald Reagan’s famous question: they believed they were worse off than before. They wanted Morsi gone, staging massive demonstrations fortified by appeals for the army to act.

Compromise was possible—bringing opposition figures into government, providing for constitutional reform to check the executive, setting an election date for the lower house of parliament, accelerating elections for the upper house, shortening Morsi’s term. Such a pact would have satisfied no one, but it would have reflected the sort of give-and-take typical in democratic systems.

Moderation was in short supply, however, so the generals staged a coup and arrested the president, his top aides, and other Brotherhood leaders. The organization’s headquarters, destroyed by protesters, was sealed, its televisions stations were seized, its businesses investigated, and its journalists were arrested. The military also closed an Al Jazeera station and used state television to limit public dissent.

The military appointed a civilian front man—a Mubarak-era jurist—as president but backed down over the choice of prime minister when secular liberals and conservative Islamists deadlocked. The Salafist Al Nour Party later abandoned the talks, after what it termed the military’s “massacre” of pro-Morsi protesters. A new constitution is to be promulgated, new elections are to be held. The Brotherhood’s future role remains unresolved.

In the middle stands the Obama administration. The Brotherhood argues that the Egyptian military must have had Washington’s okay. Anti-Morsi protesters denounce the U.S. for backing “terrorists,” a.k.a. the Brotherhood. A week after the coup the administration continues to temporize about following the law, which requires a cut-off of foreign aid, now running about $1.55 billion annually, after a military takeover.

Today Cairo suffers from competing demonstrations, bloodshed among antagonistic protesters and army forces, intransigent demands from the Brotherhood, equally unyielding sentiments from coup supporters, and division among military-government forces. It is a disaster, with the potential of becoming a catastrophe.

Although Morsi was responsible for his failures, he was obstructed at many turns. For instance, an unreconstructed judiciary tossed out the elected assembly and blocked plans for a new election. The police, who under Mubarak enthusiastically pummeled demonstrators, refused to defend Brotherhood offices from rampaging mobs.

The opposition, which failed to organize effective political parties and develop political leaders, was little better. The International Crisis Group criticized Morsi’s opponents for “viewing election results as altogether meaningless, demanding oftentimes disproportionate representation in decision-making bodies; challenging the basic principle of popular will; and yielding to the growing temptation of extra-institutional means, be it street agitation or calls for judicial or military intervention.”

The military’s coup cannot be disguised as something else. Imagine U.S. army units invading the Oval Office, arresting President Barack Obama and his senior aides, detaining hundreds of top Democratic Party officials, closing down MSNBC and other Democratic-leaning media, appointing Chief Justice John Roberts as caretaker president, and shooting pro-Obama protesters. Americans would call it a coup. Even conservatives would call it a coup.

Behind the talk of constitutional revision and new elections is an intention to skew future electoral results. The Turkish and Thai militaries used coups to rewrite the political rules to enhance their future influence before returning to democracy. Having removed a Brotherhood member from the presidency, the military is unlikely to allow another one to take office. Indeed, Egypt’s army has no love for democracy, having effectively ruled under Mubarak. The military’s rhetoric after the latest killings was eerily reminiscent of that of the Mubarak regime.

While electoral defeat would have discredited the Brotherhood’s political appeal, military ouster and persecution may encourage its long-term revival. Over time memories of Morsi’s mistakes will fade while his successors exhibit incompetence and malfeasance. The Brotherhood may build on claims of martyrdom to become an attractive alternative to the latest failing and flailing secular alternative.

However, if the Brotherhood does not receive credible assurances that it will be allowed to fairly compete in the future, political Islam in Egypt and elsewhere may turn sharply against democracy. Despite decades of repression in Egypt members of the Brotherhood abandoned neither their theology nor their ideology. Having tried the electoral process and had their victory stolen away, advocates of political Islam may decide that they must rely on other means. Warned the Economist magazine, “Egypt’s Islamists have proven the most dangerous and prone to violence when shut out of the system.”

The Egyptian nightmare is Algeria, where in 1992 Islamists were suppressed after winning first-round parliamentary elections. The Islamic Salvation Front fought back. By the time the conflict ended a decade later tens of thousands had died. If even more modest resistance, peppered by terrorist attacks, reminiscent of Egypt in the 1990s, emerged, the liberties most prized by the young secularists leading the anti-Morsi protests would be the first to be suspended. Warned the International Crisis Group, “it is virtually certain that [the Islamists] remain strong enough to spoil their opponents’ success.”

In any case, secular liberals are fooling themselves if they believe that the military is their friend. Three years ago the Egyptian military was a mainstay of the Mubarak dictatorship. The army famously tried pro-democracy protesters and conducted “virginity tests” on young women.

The military has an incentive to protect its economic as well as political influence. The generals may control up to 40 percent of the economy. Former Pentagon official Jed Babbin wrote in Monday’s TAS that the Egyptian military, “much like the mafia, regards Egypt’s economy as its own business.”

Having been invited back into the political process, the military is unlikely to depart voluntarily. Mohamed ElBaradei, former diplomat and leading liberal, supported the coup while promising to resist any retreat from democracy. However, his appointment as prime minister was blocked after objections from anti-Morsi Islamists. He received the vice presidency as a consolation prize. He likely would prove no more effective in protecting democracy.

In fact, Turkey demonstrates that ruthless democratic force ultimately may be necessary to eradicate the military’s special role. Liberals rightly criticize the Erdogan government for its mass prosecutions charging implausible conspiracies against the government. However, such tactics may be the only way to ensure that the troops remain in their barracks in the future.

After decades of dictatorship, Egyptians understandably are impatient. However, turning to the military to defenestrate political leaders for failing to meet popular expectations risks the country’s future. Elected officials will have an incentive to quickly enhance their power. As the Economist put it, “Crush your opponents could well be their motto.” The opposition will have reason to make the country ungovernable. Government will embody of the worst of the rule of men as opposed to the rule of law.

Even if Egypt avoids more short-term violence, it almost certainly faces long-term instability. There, as elsewhere, the grand hopes of the Arab Spring are withering away. Washington can do little, other than acknowledge its own impotence. The administration should do as the law demands, and suspend U.S. aid. Then, having spent years underwriting autocracy in Egypt — and getting blamed today no matter what it does — the U.S. government should just get out of the way.