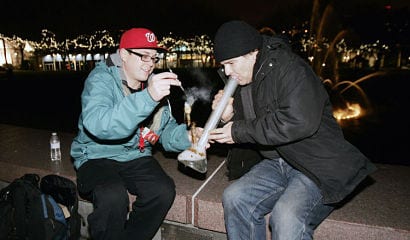 The People have spoken. And soon they’ll be tokin’.

After the success of two popular initiatives last fall, cannabis is now legal for recreational use (like squash, I suppose) in the wild and blue states of Colorado and Washington state. Federal law, which trumps state law, still considers marijuana an illegal substance, but with 99 percent of all cannabis prosecutions at state or local levels, the Obama Administration has shown little desire to force the issue.

Those of us who believe direct democracy is the tool of the devil have been proven right again. Public referenda, initiatives, and recalls undermine the kind of deliberative, representative government the Founders, in all their glorious 18th century wisdom, intended. We have state legislatures for a reason — one being so that farmers and other country folk have the same voice as marketing directors, rap singers, and baseball team owners — in other words, so the song of the rural minority is not overwhelmed by the roar of the urban majority.

Instead the Democratic-controlled legislatures of Washington state and Colorado, knowing they lacked the votes to legalize cannabis and override their governor’s certain veto, allowed the question to go before the people in the kind of direct democratic ballot that would have given John Adams nightmares, and which avoids the whole extravagance of a governor’s veto.

Coloradans and Washington staters believe they can legalize pot and bear the consequences of becoming an international drug scene and popular dope destination. That’s their prerogative. Better the people write policy than the faceless, placeless bureaucrats in D.C. Besides marijuana laws are about as local an issue as one can imagine. Drugs, first and foremost, destroy individual lives, families, streets, and neighborhoods. So it makes sense that states, not the federal government, would be in charge of regulating drugs.

This kind of local lawmaking, however, goes against the American grain. We have grown used to tackling every problem at the national level, no doubt because we think of this nation as a great homogenized mass, not the thousands of unique, diverse towns, villages and regions that we are. We have forgotten that the culture of East St. Louis, Illinois — Miles Davis’ old stomping grounds — has very little in common with the culture of the backcountry near Seney in Michigan’s Upper Peninsula — Ernest Hemingway’s old stomping grounds. But the difference in those cultures is the difference between Bitch’s Brew and In Our Time. What works in Seney is not likely to work in East St. Louis, and vice versa.

THE PEOPLE OF Colorado and Washington can probably survive legal pot, because their states are, by and large, rural middle class states, with strong work ethics and low crime rates. Besides, the middle class is notoriously resilient. That is why a country like the Netherlands, with its mostly white middle class and strong Protestant work ethic, can decriminalize weed and not suffer too greatly from the negative consequences. King County, Washington and Denver are another story. These are multi-ethnic, multi-class metropolises. Some enclaves are extremely poor with high crime rates and suffer all the usual pathologies of the underclass. Resilient the underclass is not. A “social experiment” (in the words of Washington Attorney General Bob Ferguson) in the ghettos, trailer parks, and slums will be much more devastating. But then governments have a long history of using the underclass as lab rats in their social experiments. Remember the Tuskegee Syphilis Experiment? The only difference is that this time it is the majority middle class baby boomers and hipsters who have demanded the “social experiment.”

Earlier I said there is no veto for a public referendum, but that is not entirely true. Fortunately local governments can just say no to the legal marijuana craze. In Colorado, nearly three-dozen cities and towns have banned retail marijuana sales, while 25 have passed moratoriums. That’s a whopping three-dozen cities to choose from if you are looking to start a family in Colorado!

Here is something for the city fathers of King County and Denver to consider. Historically the underclass suffers most from the consequences of radical social engineering. No doubt legal marijuana will only increase the problems their poorest, least educated residents battle day in and day out. However, the middle class will not be unaffected. A stoned, apathetic, unemployable underclass will see to that.