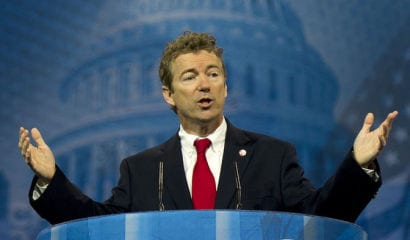 My uncle and aunt moved to Israel in the 1970s, leaving my twenty-something cousin behind in the dating scene of New York City. She didn’t find it safe to greet suitors alone in her apartment, so she had her dates pick her up at our home. One time she was waiting to be collected for an evening out with a young man from a very prestigious family, and my father was gushing in advance that this was a great honor. When she returned and we asked how it went, her response was pithy.

“It was a privilege… but not a pleasure.”

Her remark has come back to me often over the years, when meeting politicians. Even the few who are not phony and insincere tend to come across as too pat and rehearsed. This week I had a rare experience, a stark exception to that rule. I got to see a genuine, sincere citizen legislator in action, and it was simply refreshing, an absolute pleasure. For a moment there I had a flash of hope that maybe this man could become our President, but… we are getting way ahead of ourselves.

The occasion was a special invitation to join a conference call of rabbis and social service organizations representing Orthodox Jewish voters from 31 states. This was their chance to make the acquaintance of Senator Rand Paul of Kentucky. There has been talk of Senator Paul exploring his options with an eye toward entering the 2016 presidential sweepstakes. I was able to listen to the general discussion and then to follow up with the Senator one-on-one.

The session was moderated by community activist and commentator Dr. Richard Roberts of Lakewood, New Jersey, along with Rabbi Nate Segal (Rush Limbaugh’s advisor on Jewish affairs) of Staten Island, New York. Doctor Roberts recently bankrolled a mission to Israel which included the Senator and his family.

The opening salvo of questions was rather startling. The Senator was asked if he harbored any anti-Semitic or anti-Israel leanings. If he cringed as I did, he didn’t let it show. He shared with the group that he “could not imagine” treating any human being differently on the basis of their beliefs or skin color. One of the best men at his wedding was Dr. Michael Goldfarb, a fellow student of ophthalmology at medical school.

Back on substantive ground, he addressed the issue of war and peace in the Middle East. He had been very impressed during his visit to Israel to see all the inner and outer workings of a democratic society. The extent and depth of the alliance between our countries was evident. The respect shown to all faiths in Israel was impressive and contrasted with the situation in most Arab countries.

He thought this was the exact kind of country and society our foreign aid should be supporting. Too often we sent money to places which stifled freedom and/or slipped much of the cash into the pockets of corrupt officials.

While he was there, he asked everyone in government and media two simple questions. Number one: is it possible to conceive of a viable peace agreement without the cooperation of Hamas in Gaza and Fatah in the West Bank? Number two: is there any chance that those two will come together to any negotiating table anywhere? It quickly became clear that there could be no peace without

both parties and that there was no hope of their getting together. Ergo, the present reality precludes any serious peace process.

Asked about Iran, Senator Paul offered that he had met with Prime Minister Netanyahu. The Prime Minister showed him a chart identifying each stage of nuclear enrichment necessary to fashioning a workable weapon. He explained exactly where they believed Iran had reached on that spectrum and how much time was left before they completed all the steps.

Senator Paul agreed that Iran must not be permitted to reach the end of that odyssey. He hoped there were still some pressure points left, combining the toughness of the sanctions with softer talk from China, which is Iran’s biggest customer for oil. While he hoped military action would not be necessary, he quoted Ronald Reagan who recommended some “strategic ambiguity” in these cases.

Don’t tell the bad guys just how far you are prepared to go and let them fear the worst.

When asked about gay marriage, he did not hold out false hope that the Supreme Court would walk back its recent decision. He argued that television had been used as the prime vehicle for a massive propaganda campaign on this issue. He applauded the Orthodox Jewish families he had met who kept that medium out of their homes. His wife, Kelley, had been particularly taken with the innocence and refinement of the children who grew up this way.

In my private time with him, the Senator spoke about the special connection between Jews who take their traditions seriously and the Republican Party. There was a natural commonality in worldviews that should be appreciated by both sides in that relationship. He told me that he prefers the description of Constitutional Conservative, to dispel some of the fuddy-duddy vibe that attaches to the term Conservative. Today’s American constitutionalists are fighting for liberty, not for short hair and three-piece suits. He also told me he had conveyed to Reince Priebus that Republicans should appoint community organizers in minority communities, similar to a proposal I published here in

All in all, it was a delightful encounter in every respect. It is nice to see a decent, intelligent, earnest individual trying to represent the free citizen in the halls of power. More power to him, I say… er, you know what I mean…