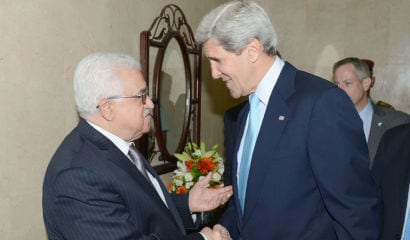 Consider the current state of affairs in the Middle East. Syria is in a civil war, Egypt might very well follow suit, and Iran is still pursuing a nuclear weapon. Yet from where the Obama Administration sits, the most pressing matter in the Middle East is the establishment of a Palestinian state. Since being sworn in as Secretary of State in January, John Kerry has been dispatched to the Middle East half a dozen times to bring pressure to bear both directly and indirectly on the government of Benjamin Netanyahu to re-start negotiations with the Palestinian Authority.

Kerry’s persistence has been rewarded with Netanyahu agreeing to release 104 Palestinian prisoners. As a result of this good faith gesture, representatives from Israel and the Palestinian Authority will meet in Washington this week and resume talks for the first time in five years. Many of these Palestinian prisoners due to be released are responsible for murdering Israeli civilians. For his part, Netanyahu says:

Yet it must be asked, “What good can come from this?” Jonathan Tobin of Commentary magazine poses another worthy question:

Would we ever think of releasing any of those convicted and currently serving long jail sentences for involvement in the 9/11 attacks or any other terrorist assault on the United States and its citizens? Not a chance.

Sadly, I am not surprised Netanyahu made this painful concession. It is the second such concession Netanyahu has made at the behest of the Obama Administration in the past four months. Back in March, Netanyahu apologized to Turkey for the 2010 Mavi Marmara flotilla incident. This was supposed to restore diplomatic relations between Israel and Turkey. As of this writing, Turkish PM Erdogan has not sent his ambassador back to Tel Aviv.

I cannot help but wonder if the Obama Administration has compromising information on Netanyahu. But assuming this isn’t the case, they calculated if Bibi was willing to cede to them four months ago, he would do so again with sufficient prodding.

Then again, why would the Palestinian Authority listen to the Obama Administration any more than Syria, Egypt, Iran, or, for that matter, anyone else in the Middle East? Anyone, that is, except Israel.

In 1947, the UN Partition Plan established both a Jewish and an Arab state. The Jews said yes, the Arabs said no. Since 2000, Israel has thrice formally offered territorial concessions for the establishment of a Palestinian state and thrice the Palestinian Authority has said no. What makes the Obama Administration think this time will be any different?

The Palestinians aren’t as interested in establishing a state of their own as they are in living in a world without Israel. How else does one explain the official map of the Palestinian Authority, which supplants the Jewish state?

I don’t know what discomfits me more — the Obama Administration’s pursuit of this foolish endeavor or Prime Minister Netanyahu for aiding and abetting them. What I do know is that nothing good can come of it.