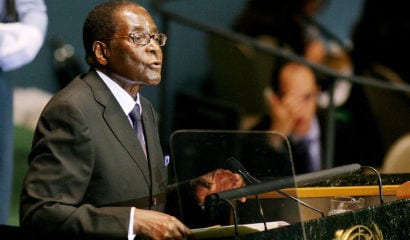 The day before Zimbabweans went to the polls, the African nation’s longtime president Robert Mugabe, who has been in power since 1980, said he would “surrender” his office if he lost the election.

Of course, Mugabe could say such a thing with the knowledge that it would never come to pass. Mugabe “won” the election with 61% of the vote compared to 34% for Morgan Tsvangirai, leader of the opposition Movement for Democratic Change (MDC). Tsvangirai has disputed the results of election, claiming fraud, and has also stated that MDC would no longer co-operate with Mugabe’s Zimbabwe African National Union – Patriotic Front (ZANU-PF).

Some recent history is in order. During Zimbabwe’s last elections in 2008, the MDC won a majority in Zimbabwe’s House of Assembly for the first time while Tsvangirai bested Mugabe in the first round of the presidential election. This resulted in MDC activists being arrested, beaten, and in a few cases murdered by forces loyal to Mugabe. Tsvangirai withdrew from the second round of voting in order to prevent further violence and allowed Mugabe an easy re-election. The international community responded by imposing sanctions against Zimbabwe. The Southern African Development Community (SADC) in turn appointed then South African President Thabo Mbeki to broker a power-sharing agreement between Mugabe, Tsvangirai and Arthur Mutambara, leader of the MDC’s splinter faction. The result saw Mugabe remain as president while Tsvangirai and Mutambara were named prime minister and deputy prime minister, respectively.

Now that Mugabe doesn’t have to share power with anyone, all Zimbabweans can do is wait for him to die. That is, if they don’t die first. According to the CIA Factbook, Zimbabweans have a life expectancy of 53. Only 7.5% of Zimbabwe’s population is over 55. Mugabe is 89.

Yet despite a nation with rampant poverty, disease, and death, Mugabe still has a powerful hold on a critical segment of Zimbabwe and the African continent at large. Many still view him as a hero against colonialism. One supporter said of Mugabe, “He is the father of our nation, our George Washington.” While Mugabe might be to Zimbabwe what Washington is to America, it must be remembered that Washington could not wait to leave office and politely declined a third term. Mugabe is now beginning his seventh and once said he intended to rule Zimbabwe until he turned 100. He is a little over a decade away from attaining this goal. Should this come to pass, it won’t surprise me if Mugabe decides he wants to stay a little while longer.

Sooner or later, Mugabe will die. Although this will be cause for celebration for most Zimbabweans, chances are things will get worse before they get better. As difficult as it might be to imagine things in Zimbabwe getting worse than they already are, whatever euphoria there might be after Mugabe’s death will eventually revert to chaos. Look for a power struggle to erupt in ZANU-PF as Mugabe has never seen fit to groom his successor. Don’t expect Mugabe’s death to heal the long standing splinter within the MDC and could very possibly deepen it. And what about Zimbabwe’s military? After decades of loyalty to Mugabe, there could very well be divisions within its divisions. These chasms could result in a civil war.

Even if the MDC does one day find its way to power, there’s a very good chance that many of those elected under the MDC banner will enjoy its trappings. Indeed, after getting a small taste of power in the last parliament, many MDC politicians became rich overnight, much to the disgust of Tsvangirai, who was forced to drum them out of his ranks. Even if the MDC conducts itself in an honest, transparent manner, it will take decades to get Zimbabwe back to the time it when it was known as Rhodesia.

Before Mugabe came to power, Rhodesia was the breadbasket of Africa. Mugabe’s legacy is that he has managed to turn Zimbabwe from Africa’s breadbasket to Africa’s basket case. So long as Mugabe is alive, there is no hope this state of affairs will change. All the people of Zimbabwe can do is to wait for Mugabe to die. This is what they have been doing for sometime now and, sadly, it appears they will have to wait a little longer. Yet given how nasty, brutish and short life is in Zimbabwe, those who live to wait another day will be the fortunate ones.