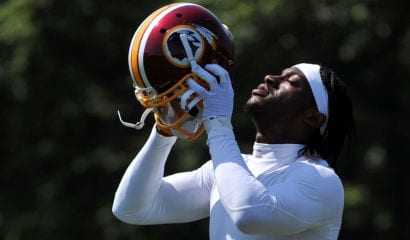 When I read that Slate, Mother Jones and the New Republic had announced with great fanfare that they would not identify Washington’s NFL team as the Redskins, I had two thoughts.

My first thought was how often the writers at Slate, Mother Jones and the New Republic write stories about much less make passing reference to the Redskins. These publications aren’t exactly known for their sports writing. So what if these left-wing magazines see fit not to call the Washington Redskins by their name? It’s not as if Sports Illustrated was giving the Redskins their walking papers. Indeed, the latest edition of Sports Illustrated features a lengthy excerpt of Dave Sheinin’s forthcoming book on Redskins quarterback Robert Griffin III.

Yet this brings me to my second thought. While Sports Illustrated might not have banished the word Redskins from their lexicon, you can be sure that Slate, Mother Jones, the New Republic, and other professional activists are setting their sights on SI to do just that. Although Slate editor David Plotz doesn’t mention Sports Illustrated by name, he makes his objective quite clear when discussing the Washington Post:

The Post is—along with ESPN and the other NFL broadcasters—one of the only institutions that could bring genuine pressure on Snyder to drop the name.

Exactly. And why not? President Obama hasn’t brought about hope and change nor have they turned America into the socialist paradise. (Well, the Obama Administration has turned America socialist, but you can forget about the paradise part). With no hope or change to be found, they have to be aggrieved and angry about something. The more trivial that something, the better. The Left lusts for power to change anything it can anywhere it can regardless of whether anything better actually comes of that change.

So at this moment, The Left wants to make the name Redskins unacceptable in polite society. The sad thing is that the people who are pushing for this probably couldn’t tell the difference between a quarterback and a cornerback.

The Washington Redskins have been playing football for over 80 years and their name is no more derogatory to Native Americans than the New York Giants is to vertically challenged people. Nor is it any more objectionable to Native Americans than the Kansas City Chiefs. Isn’t it funny that Slate, Mother Jones and the New Republic aren’t clamoring for the Chiefs to change their name? Both names make reference to Native Americans. So what makes Redskins offensive and Chiefs inoffensive? What about MLB’s Cleveland Indians and Atlanta Braves? Not to mention the defending Stanley Cup champion Chicago Blackhawks of the NHL. President Obama had no trouble mentioning the Blackhawks by name when he congratulated their triumph on Twitter this past June. Nor will he have any trouble welcoming the Blackhawks to the White House and extolling their praises as he did in March 2011.

But change always has to start somewhere. If the Left is successful is getting the Redskins to change their name then you can be sure the Chiefs, Indians, Braves, and Blackhawks will be sure to follow. An appetite for power is rarely satiated after the first taste.

On a personal note, growing up in Canada where there is a far more significant Aboriginal population, I have seen a great deal of racism directed towards Native Canadians many of whom live in squalid conditions. We have a Canadian Football League team known as the Edmonton Eskimos. Changing the name of the Eskimos isn’t exactly high on the priority list of most Aboriginal people I have talked to over the years. Quite frankly, changing the name of the Redskins, Eskimos, or any other sports team with a Native American nickname only aggrandizes the self-importance of the Left while doing precious little to solve the ongoing social problems of Aboriginal People in Canada and the United States.

With that, I would like to call upon my colleagues here at The American Spectator and at other conservative publications to make reference to the Washington Redskins as liberally as possible.