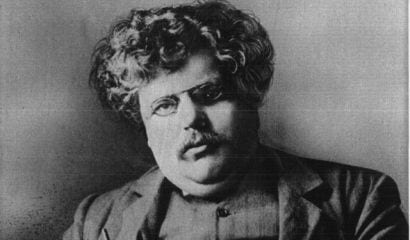 Admirers of G.K. Chesterton had reason to rejoice this week at news that an English Catholic bishop is seeking to open an investigation into whether GKC should be declared a saint.

Chesterton himself would have laughed heartily at the idea. The odiferous, 300-pound, cigar-chomping journalist was far from the stereotypical idea of a saint. Then again saints are often distinguished by their differences, their exceptional qualities, whether it be their ability to fly, be in two places at once, or sit atop pillars for decades. There are no run-of-the-mill saints.

It can’t hurt Chesterton’s chances that Pope Francis is said to be a fan (and admired the latter’s biography of St. Francis of Assisi) and an honorary committee member of a conference for the Argentine Chesterton Society.

GKC will have a heavy burden (no pun intended) to meet the requisites for sainthood. Rome’s first step is collect evidence of heroic virtue. This shouldn’t be too hard. Stories abound of the man who once defined Catholicism as “a thick steak, a pint of stout, and a fine cigar” emptying his pockets for the poor and of his impassioned defense of the faith.

Equally important is his defense of tradition. Chesterton often decried progress as just another false idol and mocked those uplifters and secular socialists who were forever trying to jump start human moral progress. Life wasn’t perfect, but man’s ability to perfect it was even more limited. He thought the proper response to life was gratitude. Or rather, as St. Thomas Aquinas had put it, “To be is good.” Similarly he railed against those imperialists on whom the sun never set, writing that a true “patriot never under any circumstances boasts of the largeness of his country, but always, and of necessity, boasts of the smallness of it.” To those who think we should go abroad looking for monsters to slay, he argued that a good nation is the one that cherishes rather than “spreads by invasion” its goodness.

In his day such goodness was in short supply. Chesterton devoted much of his life to righting the huge economic disparities that existed in his homeland. Moved by Pope Leo XIII’s encyclical Rerum Novarum and Pope Pius XI’s Quadragesimo Anno , which described the dangers for human freedom and dignity arising from unrestrained capitalism and totalitarian communism, Chesterton made it his life’s mission to formulate a humane, people-centered economics. He came up with Distributism.

Distributism was dismissed in his time as “Three Acres and Cow.” If the criticism has waned it is only because few people have heard of it. Where distributism is still discussed, snarky critics usually say it is utopian and a nostalgic return to the pre-Industrial Revolution era, a time when most people worked at home, in common fields, in the bosom of their families. The standard criticism is, if Distributism is so wonderful why did rural folks give up something similar to it to move to the cities to work in cotton mills and factories where you could earn as much as three dollars a week? History abhors simple explanations. But it probably didn’t help that throughout most of the West working class farmers were not allowed to vote, so their only voice in political matters came through riots, which occurred frequently as the rich fenced-off farm and pasture land during the Enclosure Movements. One cannot understand the urbanization of the West without studying the Enclosure Movements, writes George Orwell:

Stop to consider how the so-called owners of the land got hold of it. They simply seized it by force, afterwards hiring lawyers to provide them with title-deeds. In the case of the enclosure of the common lands, which was going on from about 1600 to 1850, the land-grabbers did not even have the excuse of being foreign conquerors; they were quite frankly taking the heritage of their own countrymen, upon no sort of pretext except that they had the power to do so.

Any investigation for sainthood can take many years, and not all causes succeed. A Vatican investigation and two recognized miracles attributed to the candidate’s intercession are necessary for the candidate to be declared a saint. Though many of us traditional conservatives already consider Chesterton, with his championing of place, limits and liberty, to be our patron saint.