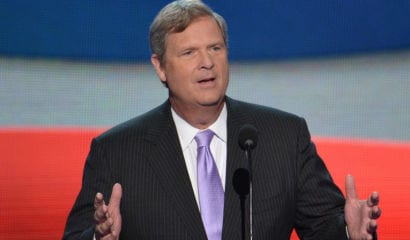 This past weekend while exploring antique shops in south St. Louis I came across a quaint circa World War II poster adorned with a fetching Lady Liberty patriotically sowing seeds. The caption read: “Every Garden a Munitions Plant.”

If the Obama Administration had a jazzy slogan like that it might read: Every Farm Boy a Doughboy.

That, at least, appears to be the policy of Obama’s Secretary of Agribusiness Tom Vilsack. For months Vilsack has been delivering the same speech at chicken and peas dinners across the country, the gist of which is that America’s farm mothers are brood sows, birthing sons to be recruited into the army and made into fertilizer. Said Vilsack:

The U.S. population is now categorized as 16 percent rural. Despite that low percentage, more than 40 percent of the men and women who serve in our armed forces are from rural America. Young men and women from America’s farms continue to lead the way in protecting our country and making us the top military power in the world.

Farm boys grow up with a sense of wanting to give something back, Vilsack says. If we lose that value system, we’ll lose our military might.

Mind you, that’s the USDA chief talking, not the chairman of the Joints Chiefs of Staff. Welcome to America’s new agriculture policy: Grow large crops of farm boys for use as cannon fodder.

To Vilsack, America is facing a crisis. That crisis isn’t the disappearance of the family farm, that rural America is turning into a vast ghost prairie, and that good topsoil is being recklessly depleted. No, the real crisis is that America’s supply of body bag filler is running low.

Though Vilsack has been giving this same speech for months, it wasn’t until a planter named Joel Salatin heard him that somebody finally paid attention to what America’s top farm official was saying. The Virginian Salatin, one of America’s most influential agrarians, was dumbfounded. There was nothing in the farm czar’s speech about the need for more small farmers, betters stewards of the land, nothing about better food, better soil development, better care for animals and plants.

The reason for more farms is to make sure we get people signing up at the recruitment office. That’s the way he sees me as a farmer. Not a food producer. When the president and his cabinet have their private conflabs, they don’t see farmers as food producers, as stewards of the landscape, as resource leveragers. No, they view us as insurance for military muscle, for American empire building and soldier hubris.

What is needed is a good crop of dumb farm boys to fight Obama’s endless humanitarian military interventions. Young men willing to take a bullet to topple desert dictators in Libya and Syria and all points between.

IS IT ANY WONDER? Vilsack, a lawyer from Pittsburgh, and one-time chief of the Iowa Trial Lawyers Association, seems to have only one credential for being agriculture secretary. His wife was from Iowa, so he settled there to set up shop as a trial lawyer. That and he campaigned for Obama in 2006, after his first choice, Hillary Clinton, dropped out of the race.

If agribusiness has a purpose beyond providing new recruits, it is growing fuel for automobiles, rather than for human beings. Says Vilsack: “The bottom line is the ethanol industry is not just important for the economy. It is a national security issue in my view.”

We’ve come full circle to the old munitions plant in the ground.

Personally, I prefer the way Wendell Berry frames the discussion: “Perhaps by devoting more and more of our already abused cropland to fuel production we will at last cure ourselves of obesity and become fashionably skeletal, hungry but — thank God! — still driving.”

It’s an old story. Bill Kauffman recently noted that during the First War to End all Wars, the Kansas patriot Kate Richards O’Hare was thrown into the brig for violating Woodrow Wilson’s Espionage Act. Her crime was telling a North Dakota audience that their rulers in Washington regarded farm mothers as “brood sows, having sons to be put into the army and made into fertilizer.”

Here is hoping that a Rand Paul presidency has the courage to offer Joel Salatin the agriculture secretary job in 2016.