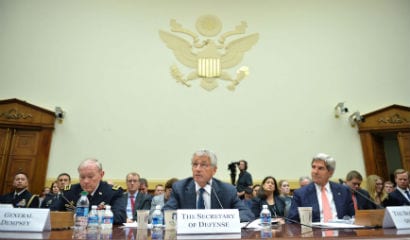 Remember back in February when Rand Paul supported a filibuster of Chuck Hagel’s nomination as secretary of defense before ultimately breaking ranks with his fellow Republican senators and voting to confirm? “Rand Paul Joins the Jackels?” was a headline to a blog post over at the American Conservative in which Scott McConnell argued that:

If Rand Paul persists on going demagogic on Hagel, he will have established beyond any serious doubt that regardless of who his father is, he is Bill Kristol and Jennifer Rubin’s boy. It saddens me to conclude that because I like to be optimistic. But it’s a truth that must be faced.

Paul came in for similar drubbings from Daniel Larison (“Paul Permanently Damaged”), Glenn Greenwald (“Any hope Rand Paul was going to usher in some sort of new foreign policy in the GOP has just been torpedoed by his NO vote on Hagel cloture”), Justin Raimondo (“It’s time for libertarians to treat Rand Paul like the turncoat he is: boycott. No $$, no support, & start calling him Paul the Lesser”), and others, including Dan McCarthy, who wrote that “Rand Paul deserves plenty of blame for his vote” and called the abuse heaped on Paul by others “entirely justified.” To his credit, Dan also suggested that Paul had no other choice:

This seemed reasonable enough when I read it, but a few days later when I asked Paul about his vote, he offered a rather different (and, I think, more convincing) explanation. Hagel, he said, was not “not a great libertarian.” He pointed out the fact that the sometime darling of the anti-war left and the non-interventionist/realist right had voted in favor of the Patriot Act and, initially, the Iraq war. Paul also explained to me that he wanted to set a precedent for filibustering Obama’s appointees. We all know what happened next.

Now Secretary Hagel, who apologized for the supposed anti-Semitic remarks that many of his libertarian and paleoconservative boosters spilled pages of digital ink defending, is as determined as John Kerry or Barack Obama to bomb the hell out of surgically strike Syria.

Shows us how sound Paul’s instincts are, no? Not to mention how even would-be critics of Republican Party tribalism, can be, well, tribalist. Hagel was their man, and if Paul wasn’t 100 percent behind him, his political and intellectual integrity was an open question. I’d be interested to learn whether any of the writers who were all but ready to give up on the Senate’s most principled (and politically savvy) critic of American interventionism over the Hagel issue have changed their minds about the former Nebraska senator and whether neoconservatives (I am thinking especially of Bret Stephens) will, in turn, start apologizing to Obama’s secretary of defense.

This isn’t some kind of crass attempt at “gotcha.” I really am wondering what Hagel’s defenders (I have been one of them myself) are saying to themselves these days.