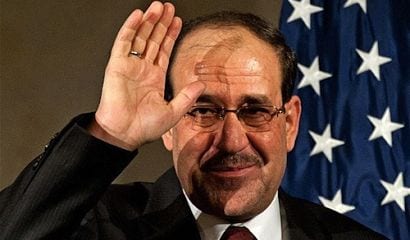 Just as 2011 in Iraq ended with a political crisis following the issuing of an arrest warrant by Prime Minister Nouri al-Maliki against Vice President Tariq al-Hashemi on allegations of running a death squad, so 2012 has rounded off with another political crisis: this time involving the Finance Minister Rafi al-Issawi, a member of Ayad Allawi’s Iraqiya bloc.

In this case, the arrest warrant is not against Issawi himself, but rather some members of his security entourage, charged with aiding Hashemi’s men in the Vice President’s alleged death squad.

As always, media outlets were quick to note the ethno-religious backgrounds of the men involved in this current political crisis: namely, Maliki as a Shi’ite versus Issawi, who is a Sunni Arab.

Reporting on demonstrations that subsequently arose in the predominantly Sunni Arab province of Anbar in protest at the move against Issawi, an Associated Press piece printed on the Guardian’s website came with the headline, “Iraq protests signal growing tension between Sunni and Shi’a communities.”

The piece then affirmed in the main text: “The unrest is part of broader sectarian conflicts that threaten the stability of the country.”

On this view, the current political debacle is indicative of a deepening Sunni-Shi’ite crisis in the country. So is the Maliki-Issawi crisis a sectarian affair?

In short, the answer is both yes and no.

Start off with some of the evidence that points in the affirmative direction in answer to the question. Both Maliki and certain opponents of his in this crisis have played the sectarian card, hurling accusations at each other of stirring up sectarian strife, while portraying themselves as defenders of the ethno-religious communities they claim to represent.

For example, in an interview with al-Hayat, Tariq al-Hashemi claimed: “What is happening to my colleague Dr. Rafi al-Issawi is further proof that there is a plot to exclude Sunni Arabs from the political process.” Hashemi went on to say that Maliki is “an extremely sectarian man,” even as he also affirmed that Maliki’s targets are not limited to Sunni Arabs.

Hashemi has portrayed the arrest warrant against himself in similar terms, urging Iraqis not to allow Maliki and his allies to get their supposed wish of “sectarian strife.” In a similar vein, Maliki has accused the reaction in opposition to his move against Issawi of taking on a “sectarian” dimension against Shi’ites.

Further, people on both sides have depicted the crisis as a sectarian game instigated by foreign powers in the region. Thus, protesters in Anbar have burned Iranian flags, with one Iraqiya MP accusing Maliki and his allies of being traitors serving Iran, and some banners calling for a “Sunni” liberation of Iraq from Iranian occupiers.

Meanwhile, Maliki himself has hinted that there might be a Turkish and Syrian rebel hand behind the protests, drawing attention to the fact that some protesters were holding portraits of Turkish Prime Minister Recep Tayyip Erdogan and Free Syrian Army flags.

Similarly, Press TV — Iran’s English-language outlet — claims that “Turkey is working closely with Qatar, Saudi Arabia and al-Hashemi to design tensions with the present Iraqi government,” a sentiment shared by many of Maliki’s supporters.

What this rhetoric foremost illustrates is how many of Iraq’s politicians play the sectarian card in an attempt to rally support when they feel that they are under fire.

Concomitant with this approach is a mindset of victimhood that naturally entails allegations of foreign powers playing a role in stirring up unrest. This rhetoric in turn helps to arouse sectarian sentiment in demonstrations and counter-demonstrations.

Does it follow that Maliki went after Issawi just or primarily because he is a Sunni Arab? No. The fact is that Maliki will go after any politician he perceives to be too much of a threat to himself or a person who works in a government institution and over whom he feels he does not have enough control.

That is, Maliki did not target Issawi because of his ethno-religious identity, but rather because he perceives Issawi to be a longstanding personal rival who needs to be put in his place.

For comparison, one should note Maliki’s attempts to crack down on the Shi’ite MP Sabah al-Saidi, who is not tied to any political bloc. Saidi has been an ardent critic of corruption in the government, and has most recently appeared live on TV purporting to expose a number of corruption scandals in the highest ranks of the Maliki administration.

Since September 2011, there has been an arrest warrant against Saidi, which came in the context of Saidi threatening to expose how Maliki was using the intelligence agencies against him.

Related to the Saidi case is the arrest warrant against the head of the Central Bank: Sinan al-Shabibi. Like Saidi, Shabibi is a Shi’ite, and while the official pretext for the arrest warrant pertains to allegations of corruption, most politicians outside Maliki’s State of Law bloc simply saw the move as a unilateral attempt by the premier to assert greater control over the Central Bank.

Thus, even the Citizens Bloc — headed by Ammar al-Hakim, who is an ally in the Maliki coalition government and leader of the Shi’ite Islamist Supreme Islamic Council of Iraq — warned that the move against Shabibi risked becoming a stepping-stone towards “one-man dictatorship.”

Those outside Maliki’s own faction have perceived the move against Issawi in the same way. For example, the Sadrists, who have been at odds with the premier not only for the arrest warrant against Shabibi but also for the Russian arms deal corruption scandal, have indicated their sympathy for the demonstrations protesting against “corruption and dictatorship.”

Earlier on, some of the Sadrists even went to Anbar province to show their support. The “Majlis al-A’yan” in the Shi’ite province of Basra (council of tribal sheikhs) has also expressed solidarity with the protests in Anbar.

At the same time, the Sadrists have made it clear they will not participate in any protests in which the FSA flag is present or in which there are sectarian slogans.

Above it was noted that certain figures both for and against Maliki have played the sectarian card in their rhetoric about the current political crisis. The main exception has been none other than Issawi, who at a demonstration in Ramadi emphasized that the protests should represent all Iraqis and that Maliki targets all his opponents, not just Sunni Arabs.

This illustrates, as Najaf-based analyst Fadel al-Kifa’ee suggested to me, that Issawi is much more of a moderate figure than Hashemi, whom I consider to be guilty of the charges against him, even as the arrest warrant was issued in a political context (i.e. Hashemi’s rivalry with Maliki).

It must be admitted that the nature of the pretext against Issawi’s entourage has a sectarian flavor. When Maliki goes after his opponents, it is to be expected that serious allegations of involvement in terrorism will play a part if the rivals in question happen to be Sunni Arabs. In contrast, arrest warrants against Shi’ite opponents entail less serious pretexts.

Should Maliki ever perceive the anti-American Shi’ite cleric Muqtada al-Sadr and his followers to pose too much of a threat to his power, it is likely that an arrest warrant against Sadr over allegedly ordering the murder of the cleric Sayyid Abdul-Majid al-Khoei will be revived. Even as we can acknowledge that the context of reviving the arrest warrant would be political, it does not diminish the validity of the accusations any more than for Hashemi.

Yet against Shi’ite opponents (including Sadr), Maliki would never use the pretext of allegations of running sectarian death squads, because in the all-out sectarian civil war of 2006-7 centered on Baghdad, Maliki was protecting the Shi’ite militias, as he feared that the Sunni insurgency posed an existential threat.

In sum, it is clear that Maliki did not go after Issawi simply because he is Sunni Arab. Rather, as Maliki’s record in dealing with rivals elsewhere illustrates, personal enmity between the two played the biggest role, even as it is apparent that people on both sides have stirred up sectarian rhetoric to rally support, and that the demonstrations in Anbar (now occurring in the northern city of Mosul) have increasingly taken on a sectarian character over time.

In any event, the reaction of Iraq’s other political factions outside the State of Law bloc — overwhelmingly criticizing Maliki for his move against Issawi — still tells against a monolithic sectarian analysis of the current crisis. The main issue instead is the ongoing absence of proper rule of law in Iraq.

What next for Maliki? It seems he has recognized that he has gone too far in going after Issawi’s entourage, and accordingly has made a concession to appease protesters by ordering the transfer from Baghdad to Anbar of some female prisoners who have complained of torture in prisons in the capital.

Just as Maliki eventually reached a concord of understanding with the Sunni Arab deputy PM Saleh al-Mutlaq, who had openly accused Maliki of being a dictator worse than Saddam (and was recently attacked by demonstrators in Anbar), thus he will attempt to do so with Issawi.

Yet it should not be thought that Maliki will have gained anything from this debacle. On the contrary, his standing among Sunni Arabs in the disputed territories will likely be diminished for the provincial elections this year as a result of his move against Issawi, even as his brinkmanship game over the past month or so with the KRG had helped him build up a support base among Arabs — both Shi’ite and Sunni — in the disputed areas.

On a final note, be careful about drawing any connection between the current political crisis and a likely upcoming wave of bomb attacks by the likes of al-Qa’ida in Iraq. Analysis of data on violence illustrates that the remaining insurgents launch a campaign whenever major Shi’ite festivals like Arba’een come up (Arba’een is happening right now), in which the numerous pilgrims who have come to Karbala are particularly vulnerable targets.