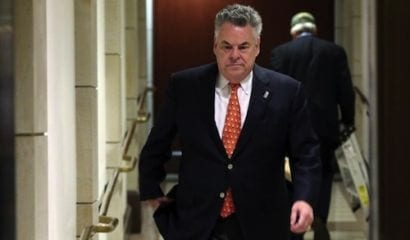 Is nothing sacred? In Washington the answer is no.

As the last Congress sought to avoid the “fiscal cliff” and raced toward adjournment, the House refused to vote on a pork-ridden bill sold as aid for the victims of Hurricane Sandy. That triggered a splenetic outburst from Rep. Peter King (R-NY), who complained that the GOP stuck a “knife in the back of New Yorkers and New Jerseyites.”

It was an example of political extortion at its worst. In Washington political fraud rules. The $60 billion bill did not live up to its sales pitch. Much of it had nothing to do with helping hurricane victims. Complained Jon Fleischman of the Flash Report: “You would not believe how many billions of dollars in pork barrel spending has been stuffed into this legislation by appropriators in the upper chamber.”

For instance, $17 billion was for “Community Development Block Grants,” boondoggle spending that usually benefits political activists rather than average citizens. Alaska fishermen several thousand miles away from Hurricane Sandy would have gotten $150 million. There was $8 million for cars and equipment for the Departments of Homeland Security and Justice.

The Veterans Administration would collect $207 million for its Manhattan Medical Center. There was $2 million to repair a roof at the Smithsonian Institution in Washington and $58.8 million for private forest restoration. Almost $11 billion was targeted for future public transportation construction and maintenance.

Another $41 million would go for work at eight military bases as far away as Guantanamo Bay in Cuba. And $4 million for repairs at Florida’s Kennedy Space Center. The connection of all these projects to Hurricane Sandy was not immediately obvious.

If Rep. King and other northeastern legislators had simply wanted disaster relief money, they could have had it. If the bill had focused on disaster relief. Rep. Darrell Issa (R-Ca.) observed: “They had the opportunity to have a $27-to $30-billion legit relief package, packed it with pork, then dared us not to vote on it.”

An unnamed GOP aide made the reasonable point that “we need to know more about the contents of the [second] bill before deciding on a path forward.” A short delay was the least Congress could do for taxpayers.

The new House immediately passed $9.7 billion in extra money for the bankrupt federal flood insurance program. A vote is expected mid-month on the rest of the package. Reported the New York Times: “The overall measure would provide money to help homeowners and small-business owners rebuild; to repair bridges, tunnels and transportation systems; to reimburse local governments for overtime costs of police, fire and other emergency services; and to replenish shorelines. It also would finance an assortment of longer-term projects that would help the regions prepare for future storms.”

Rep. Frank LoBiondo (R-NJ) promised that the second measure would “strip out the extraneous spending directed to states not affected by the storm.” Of course, that money should never have been in the legislation. The new combined total is expected to run about $37 billion, well under the original measure passed by the Senate.

No one can have anything but compassion for those who lived through the worst of Hurricane Sandy and any other natural disaster. But that doesn’t give vote-seeking pols a license to loot the public for partisan gain. In fact, federal disaster “relief” is itself a disaster.

Observed the Wall Street Journal: “every disaster has become a Washington political opportunity. The Federal Emergency Management Agency is fully funded but does an incompetent job. Federal flood insurance encourages overbuilding in storm zones, so taxpayers pay first to subsidize the insurance and then to save the homeowners who overbuilt. And politicians use the public sympathy after any disaster as an excuse to throw even more money not merely at victims but for pent-up priorities they should be funding out of regular state and local tax dollars.”

It’s quite a racket. A 2006 Cato Institute study cited earlier studies which found that presidents declare far more disasters during reelection years and states with members serving on FEMA’s oversight committees collect significantly more disaster money. Overall, “nearly half of all disaster relief is motivated by politics rather than by need.”

Obviously, the government has some assets, such as the National Guard, which no private entity can match. But most of what FEMA does can be done better by others. For instance, when it comes to delivering supplies, companies like Wal-Mart have proved to be far more efficient than FEMA. Charities such as the Red Cross and Salvation Army more effectively address the deepest human needs, raising money across the nation to promote relief.

But even if politicians were pure as the driven snow and bureaucracies demonstrated extraordinary competence, disaster management still should not be turned over to them. While excoriating the GOP for delaying its vote, the president said “When tragedy strikes, Americans come together to support those in need.” Which is true. However, that doesn’t mean government should take control.

The state, a coercive and inefficient institution, always should be a last resort. It has basic responsibility for preserving public security and maintaining public facilities. Otherwise, disaster relief should be principally a matter for civil, not political, society.

So, too, compensation for victims of terrorism and their families. Even stranger than the relief bill for Hurricane Sandy was the one approved after 9/11. The terrorist attacks were monstrous and murderous. But the taxpayers should not have been stuck with the bill for personal losses.

Middle class Americans ended up compensating families for the earning potential of investment bankers who died. (In return, families weren’t supposed to sue the airlines. However, that shouldn’t have been the taxpayers’ responsibility either.) The legislation later expanded coverage to provide compensation for victims and even first responders who fell ill as a result of the attacks, including from toxins released from the building’s collapse. More than $11 billion was paid out.

Americans organize every day to help each other, and usually outside of politics. Indeed, the U.S. always has been distinguished by the readiness of its people to respond to crisis. Frenchman Alexis de Tocqueville remarked upon the phenomenon nearly two centuries ago when he visited America. Americans continue to form “little platoons” and give hundreds of billions of dollars every year to help meet society’s deepest needs.

Private assistance is better than government welfare for several reasons. First, genuine compassion is not compulsory. Giving away other people’s money is not being generous. Choosing whether to give and thinking seriously about how much to give to whom are important moral decisions. Placing responsibility for making such decisions on individuals is a form of character development. Said Benjamin Franklin: “When you are good to others, you are best to yourself.”

Charity also strengthens the sinews of community. As Marvin Olasky famously explained, compassion originally meant to “suffer with.” It was relational. People met each other. They learned about and from each other. They helped each other.

Over time compassion has turned into writing checks. That is important, even essential, but does not build human relationships. Now politicians act as if making others write checks is the highest form of compassion. Yet that actually undermines society: responsibility for the care of others is transferred to the state and beneficiaries become dependent on government. The only real winners are vote-seeking politicians like Rep. King.

For decades politicians have steadily substituted state welfare for private charity. It will take time to reverse direction, transferring responsibility for aiding those in need back to individuals from governments.

That won’t be easy. But Americans have to start saying no. No more turning government “aid” into political pork. No more ramming “aid” bills through with no thought or debate. No more draping political extortion with compassionate rhetoric.

People should help those who suffer all manner of misfortune, including natural disasters, such as Hurricane Sandy. But that doesn’t mean creating more government boondoggles just because they have been labeled as disaster aid.