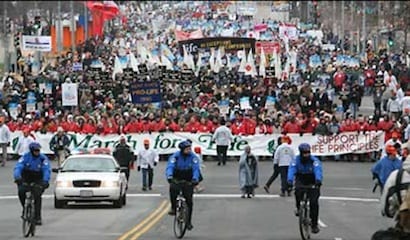 Roe v. Wade, perhaps the most ostentatiously unconstitutional of many dubious Supreme Court decisions purporting to interpret the Constitution, was issued 40 years ago. Rather than settle the abortion issue, the justices triggered a bitter political conflict which continues unabated.

Roe represents tragedy. An unwanted pregnancy can cause serious, sometimes overwhelming, problems. Moreover, there are few more personal decisions than to terminate a pregnancy. Liberty and life seemingly come into sharp conflict.

But abortion is not a just another “choice.” Rather, it is a flight from responsibility. Abortion is a response to choice, that is, the decision to have sex. Other than rape, sex is voluntary. Sometimes the result is an unwanted baby.

This goes as much for men as well as women. In fact, many of the most fervent abortion supporters are men. The availability of abortion absolves them of responsibility for their actions. Lynn Marie Kohm of Regent University School of Law observed: “Indeed, the ultimate irony of abortion is that it inherently lets men off the hook.”

Pregnancy produces a human being. Arcane arguments over personhood do not change the fact that the continuum of life is not easily segmented. Whether the critical moment is conception or implantation, thus starts a process which, if not interrupted, results in a human being. The physical differences between a fetus, a baby, and a child, though real, do not affect the moral worth the individual created. No one should be aborted without serious, if not overwhelming, justification.

There is one when the mother’s life is at stake. But not because someone would prefer not to have a baby at a particular time. The claim that abortion is an absolute right even when the pregnancy results from voluntary sex sacrifices life for convenience. For instance, last year blogger Allison Benedikt waxed eloquent in defending the right to kill one’s baby because one is a newlywed and not yet “ready for kids,” a “single woman who wants to focus on her career,” or “the mother of two who is not in the market for number three.” All of these would be good reasons to eschew sex. Certainly they justify using birth control. And they create an understandable desire not to be pregnant. But they are not good reasons to eliminate a life, especially with adoption as an alternative.

Yet there is at least one worse reason to abort a baby: sex selection. You want a kid. But you want a kid of a particular sex, usually male. Unfortunately, even with modern technology it’s hard to guarantee the result. No problem, argued Benedikt, who warned her pro-abortion allies against feeling guilty. Just kill the (mostly) female babies. After all, “these are fetuses with female or male genitals — not little girls and little boys.”

Some people don’t even make that distinction. Princeton “ethicist” Peter Singer is not the only educated professional to advocate infanticide. Last year Alberto Giubilini and Francesca Minerva argued in the Journal of Medical Ethics for what they called “after-birth abortion” if the circumstances “would have justified abortion.” Presumably having to purchase pink rather than blue baby clothing could create just such a burden. So solve that problem with a sex-based abortion. After all, “Merely being human is not in itself a reason for ascribing someone a right to life,” wrote Giubilini and Minerva.

Nevertheless, even most abortion advocates don’t go this far. For them, birth means something. And being a human being does create a right to life. Frances Kissling, a long-time abortion advocate with Catholics for Choice, admitted: “Abortion is not like having your tooth pulled or having your appendix out. It involves the termination of an early form of human life. That deserves some gravitas.”

But abortion supporters still are stuck with sex selection abortion. No matter that sex discrimination is widely thought to be bad. If abortion is an absolute right, then the reason doesn’t matter, even if the purpose is to kill baby girls.

The problem isn’t theoretical. The child-gender ratio in India, which recently has been convulsed in outrage over a murderous gang rape, “is at its most lopsided in 50 years,” reported the Washington Post earlier this month. Some of the lowest ratios of females to males occur in cities and provinces populated by the growing middle class. Observed the Post: “a growing number of couples opt to abort female fetuses or neglect infant girls in their desperation for sons.”

China may pose an even greater problem. The age-old preference for boys — who provide farm labor and carry the family name — has been aggravated by the Maoist regime’s “one-child” policy. Although that restriction has been relaxed, China now has a dramatically malformed age and sex structure. Normal is 105 boys to 100 girls; in some provinces the ratio climbs above 130. A deadly preference for males also is found in Afghanistan, Bangladesh, Pakistan, South Korea, and Taiwan. All told, Mara Hvistendahl, author of Unnatural Selection: Choosing Boys Over Girls, and the Consequences of a World Full of Men, estimates that Asia lacks 160 million women who otherwise would be alive.

A similar phenomenon is evident in Armenia, Azerbaijan, Kosovo, and elsewhere in Eastern Europe. Some immigrant-heavy Canadian provinces exhibit a similar pattern, as do America’s ethnic Chinese, Indian, and Korean populations. Indeed, Kohm argued that “Sex selection abortion, or sex preselection as it may also be labeled, is rapidly becoming an acceptable family planning alternative for Americans.”

Kohm went on to call the practice “woman-on-woman violence.” If it is a woman’s choice to have an abortion, then sex selection abortion usually means women (adults) killing women (babies). That is, complained Kohm, women “insist on putting self desire for a child of a certain sex above common good to all women by aborting female fetuses.”

But sex selection and the culture behind the practice give rise to violence against adult females as well. In developing states mothers known to be carrying girls sometimes face physical abuse, often in an attempt to induce an abortion. The lack of brides for “excess” males has created a veritable industry in sex trafficking throughout East Asia, especially to China and Taiwan, some of it forced. Harvard’s Erika Christakis pointed to the Indian rape as another, even more brutal, possible consequence: “the preference for male babies in India and much of the world may be at the root of this senseless violence.” Although correlation does not prove causation, the “rates of violence towards women increase” in nations as their male to female gender ratios increase, she explained.

There are other adverse social consequences. Warned Christakis: “The imbalance has squeezed poor and uneducated men out of the marriage market in particular, so there is a surplus of young men who are unable to find partners and assume standard adult roles in their societies.” Their frustration could even turn into fodder for social unrest and foreign conflict.

Forty years ago pro-abortion advocates won the battle of Roe v. Wade. But they short-circuited the political process, effectively jump-starting the vibrant pro-life movement. In recent years more people have declared themselves to be pro-life than pro-choice, and the majority of Americans oppose unrestricted abortion. The vast majority dislike sex selection abortion. The pro-abortion lobby may ultimately lose the political war.

No where is the tension between liberty and life more obvious than the issue of abortion. Yet the real issue is responsibility, not choice. One must take responsibility for one’s actions to preserve liberty. Which in the case of abortion means protecting, not destroying, life.