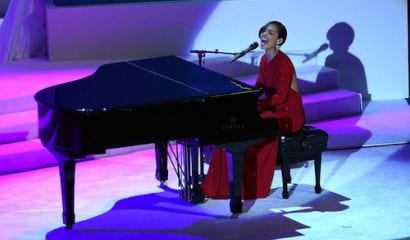 Eva Longoria, Ashley Judd, Nick Cannon, and other beautiful people flocked to Hollywood-for-Ugly-People to attend Barack Obama’s second inauguration. The gift of convincing an audience, or constituents, that you are something that you are not remains a common denominator for success in the Capital and the Entertainment Capital. Superficial people attract one another like magnets.

The made-for-television presidency got the inauguration it deserved. Beyoncé lip-synching the Star Spangled Banner reminded America that her business, like the president’s, is show business.

If the inauguration offered anything faker than pretend singing, Alicia Keys’ stage-name surname may have been it. But unlike the pre-recorded marionette Beyoncé, the ivory-tickling Keys, who turns 32 today, kept it real — really fawning, really unsettling, really bizarre.

“Obama’s on fire,” Keys sang, altering the words to her hit “Girl on Fire,” an ode to Joan of Arc, one presumes. Taken literally, Keys’ impromptu reworking of the song comes across as the sonic expression of a fantasy harbored by several of the more disturbed readers of this site. But the worshipful body language overwhelmed the pyromaniac spoken language. Emoting is the new talking.

Further verses, without the context of Keys’ earnestness, further confuse. Keys sang that Obama’s “got both feet on the ground/And he’s burning it down/Got his head in the clouds/He’s not backing down.” Translation please?

Hers was a performance fit for a king — or at least a Qaddafi. And the performer did a convincing impersonation of a groveling subject. That’s the expected tone from the press, from advisors, from the plebes. Why not from a pop star? In case the president didn’t find the creepy serenade obsequious enough, Ms. Keys added: “Everyone knows Michelle is his girl/And together they run the world — and we’re gonna let it burn, let it burn.” Come again?

Before Alicia Keys whored out “Girl on Fire” to a politician, she did so to a corporation. The CitiBank spot features a boyfriend jilted because of boringness becoming Mr. Carefree Spontaneity by purchasing Alicia Keys’ tickets. Only a Madison Avenue cubicle conformist could imagine attending a top-40 pop concert as a daring escape from milquetoast drab.

Keys, perhaps based on her penchant for numbers touting searing incandescence, will sing “the rockets’ red glare, the bombs bursting in air” before the Super Bowl. The Girl on Fire is “looking forward to really doing it my style and my way, and I’m looking forward to really making it great.” What lyrical improvements Ms. Keys has planned for Mr. Key (no relation) will be revealed at dinnertime Sunday next.

There will be no such surprises with the game’s intermission entertainment. Mrs. Jay-Z, like Madonna before her, will be the halftime singer who doesn’t bother to sing. Sycophants will praise her performance, which is an apt word for tricking millions of people, watching a presidential inauguration or a football game, into believing that live lacks a “v.”

Beyoncé outsourced her inauguration rendition of the national anthem to a digital facsimile. Alicia Keys recast the artist mantra of “speaking truth to power” as “sucking up to power.”

But they haven’t lost an ounce of credibility. Don’t believe me? Ask Alicia Keys, who came out swinging in Beyoncé’s defense, dubbing — get it? — the once and future Destiny’s Child singer an “incredible artist.” But what do Keys, or Beyoncé, know about creative expression? They are to art what orange drink is to orange juice.

It’s Orwellian that entertainers insist that we refer to them as “artists”; more so that we go along. The demand by performers to call them “artists” becomes more strident as their relationship to the actual word becomes more distant. The insecurity complex is something akin to the nouveau riche camouflaging their cockney accents with exaggerated Aristocratese. Draw attention from your true self at the risk of exposing it.

It’s a little like a rhetorician averse to governance transforming a typically staid second inauguration into a gauche coronation.