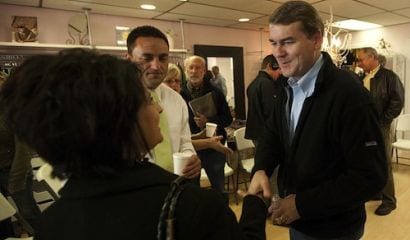 It is rarely a productive exercise to accuse Democratic politicians of hypocrisy. After all, they so rarely campaign on principles that there is seldom an opportunity to notice when they violate the few principles they claim to hold dear. The hypocrisy-laden debates over the nomination of Chuck Hagel thus offer a unusual opportunity.

What pass for Democratic principles, but which in fact are just rationalizations of desired outcomes regarding the transfer of power and wealth, include, in domestic policy, that the rich get rich by making other people poor and, in foreign policy, that the U.S. is just one nation among many and therefore not exceptional.

A principle-free case in point: Democrat politicians, including particularly President Obama, are attempting (again) to destroy the educational opportunities of America’s poorest and poorest-served children in order to please teachers unions – perhaps the single most corrosive force attacking America’s youth and our nation’s ability to compete in the future of a global economy. I wonder what “principle” this travesty stems from. (John Boehner forced the reinstatement of the DC Opportunity Scholarship Program in 2011 after Obama and his fellow Illinoisan, Dick Durbin, had torpedoed it two years earlier, but Obama has taken aim again. And why not, since voters in Washington, D.C. cast 91 percent of their ballots for him?)

What tax-raising, UN-loving, union boot-licking congressional Democrat could easily be called a hypocrite when their few core beliefs are little more than the statist, irrational detritus of the educational system they themselves have devastated?

Republican hypocrisy – unfortunately too common among all homo politicus, but not least because Republicans often campaign explicitly on principle – is kept on the front page of newspapers and websites until the hypocrite, even if having violated little more than a marriage vow, is forced from office.

Democrat hypocrisy, or even outright wrongdoing for which ordinary citizens might face criminal charges, is ignored by the media which in turn keeps the public from understanding how their government has been infiltrated at the highest levels by people of questionable moral character.

In the Obama administration, it began in the earliest days when a tax cheat was elevated to be Secretary of the Treasury. Speaking of Geithner’s not paying about $34,000 in taxes he owed and blaming it on his tax software, Senator Chuck Schumer (D-NY) quipped, “Tim has made some mistakes, which he has freely admitted and corrected.” Does anyone expect that he, or even most Republicans, would have let a tax-dodging George W. Bush nominee for a cabinet position off so easily?

Consider President Bush’s poorly considered nomination of Harriet Miers to replace the Supreme Court vacancy left by the retirement of Sandra Day O’Connor. From prominent conservative columnists to Republican politicians, even NPR recognized that “Republican opposition made [the] Miers bid untenable” because of her obvious lack of sufficient qualifications for the post.

Fast-forward to today, when President Obama has nominated former Senator Chuck Hagel (R?-NE) to be the next Secretary of Defense, replacing Leon Panetta.

Others will make the case for or against Hagel in terms of his qualifications for the office he seeks. But the hypocrisy of Democrats in the U.S. Senate and their lackeys in the media has reached extremes that should cause voters to take notice – even if the NY Times won’t.

In a 2006 interview with author Aaron David Miller, then Senator Hagel made his famous comment that “the Jewish lobby intimidates a lot of people around here.” It is no wonder that an Iranian news agency recently described Hagel as “anti-Israel.” When questioned by Senator Lindsey Graham (R-SC), Hagel could name neither any person who has been intimidated nor any policy that the Senate “has been goaded into doing” because of such lobbying.

Regardless of one’s view of where Israel should fit within American foreign policy, imagine the likely outrage from at least some of the 11 Jewish members of the Senate, including the aforementioned Schumer and Chairman of the Senate Armed Services Committee, Carl Levin (D-MI), if a Bush nominee had said such a thing. Imagine the above-the-fold large typeface plastered across newspapers across the country, and the feigned outrage of MSNBC talking heads.

Senator Chuck Schumer was skeptical about Hagel but then changed his mind after a 90 minute West Wing meeting….Impressive. An hour-and-a-half conversation undid a twelve-year voting record, which included, as recently as 2008, a vote against an amendment to the Defense Authorization Bill to label the Iranian Revolutionary Guards Corps a terrorist organization. Schumer is often referred to as the most influential Jewish member of the Senate. But then how could verbal assurances alone have turned him around when he is surely aware of the Jewish teaching that it is not what a man says but what he does that matters?

Senator Michael Bennet (D-CO) is at least nominally Jewish, born to a Jewish mother who survived the Warsaw Ghetto in World War II. Bennet, though not a practicing Jew, describes himself as a strong supporter of Israel and has cosponsored a Senate resolution “expressing vigorous support and unwavering commitment to the welfare, security, and survival of the State of Israel…”

Yet Senator Bennet has been as shy as an Amish woman visiting Sturgis about whether he intends to support Hagel’s nomination.

Bennet’s hypocrisy, even if just through silence, regarding Hagel’s paranoid view of those Americans who support Israel pales in comparison to his hypocrisy on what should be, but unfortunately isn’t, a massive political problem for Hagel:

In 1998, during a debate over the nomination of James Hormel to be the U.S. Ambassador to Luxembourg, Hagel suggested that Hormel could not be effective because Hormel was “openly, aggressively gay.”

One year later, Hagel opposed the repeal of the “don’t ask, don’t tell” policy regarding gays in the military, saying “The U.S. armed forces aren’t some social experiment.”

According to the New Yorker magazine, his U.S. Senate voting regard on gay rights issues “earned him a zero-per-cent rating (three times) from the Human Rights Campaign, the leading gay-rights lobby.”

Hagel has recently retracted these statements and more, but does anyone actually believe him?

Even the recently retired and openly (and perhaps sometimes aggressively) gay Congressman Barney Frank (D-MA) said that Hagel’s “bigoted opposition” to Hormel was “not, as Senator Hagel now claims, an aberration.” He added, “I cannot think of any other minority group in the U.S. today where such a negative statement and action made in 1998 would not be an obstacle to a major Presidential appointment.” (More on the principled Mr. Frank in a moment.)

And yet Michael Bennet remains silent.

Why do I particularly mention the backbone-challenged Bennet on this issue? Because, living here in Colorado, I am painfully aware that Michael Bennet is Colorado’s junior senator only because his Republican challenger in 2010, Weld County District Attorney Ken Buck, fell headfirst into the mire of a David Gregory gotcha question on the subject of homosexuality on Meet the Press just prior to the election.

In a debate that should have been about out-of-control government spending and high unemployment, Gregory (like George Stephanopoulos, Bob Schieffer, and other such Democratic Party activists) was looking for any way to sidetrack the conversation. He asked Mr. Buck if he believed that homosexuality was a choice. Buck, who should have said “this election is about jobs and the economy, not my views on gays” answered yes, and went on to inartfully compare homosexuality to alcoholism (in terms of possible genetic predisposition). It played right into the Bennet campaign’s strategy of painting Mr. Buck as “extreme” and “outside the mainstream of views” (a phrase which David Gregory helpfully offered to Bennet during that interview).

Bennet had led in only three of the nearly thirty polls tracked by RealClearPolitics.com from June 2010 leading up to the election – and two of those were polls done by a Democratic-leaning polling organization (PPP). Through most of the campaign, few thought Bennet had a chance to win in a year characterized as a Tea Party tsunami. (Buck was the Tea Party choice over “establishment” candidate Jane Norton, whom I endorsed based on my view that they were nearly identical on the issues but that Democrats had a better chance of beating Buck by making him look “extreme.” Even I didn’t expect Mr. Buck, whom I like and respect, to do so much of their work for them.)

In the end, Bennet beat Buck by 1.7 percent of the vote, trouncing Buck among women by 16 percent and, critically, among unaffiliated voters by 11 percent despite the GOP winning nearly 60 percent of independent voters nationally that year.

Michael Bennet is a U.S. Senator because a Republican made controversial statements about homosexuality.

And yet on the subject of the openly, aggressively anti-gay Chuck Hagel, Bennet remains silent.

Of course, Bennet is not alone. Barney Frank seems to have forgotten the truth of his statement that Hagel-like bigotry would normally be a major obstacle to receiving or being confirmed in a key presidential appointment. In what passes for principle in the Democratic Party – again there are no principles, just desired outcomes – just one week later, and in nearly the same breath in which he said that he had hoped the president would not nominate Hagel, Frank said he now supports his confirmation because of Hagel’s likely impact on defense policy.

Democrats have no sense of fear of being called hypocrites, even on a political issue as center-stage and divisive as gay rights. When it’s about party loyalty rather than principle – which is what it’s always about with Democrats – all is apparently forgiven. Thus, the same gay rights organization that persistently gave Hagel failing grades on their issues went – in just 24 hours – from calling Hagel’s anti-gay comments “unacceptable” to falling into line.

Democrats are also unconcerned with Senate hypocrisy regarding Hagel’s financial disclosures, particularly as they relate to income he may have earned, albeit indirectly, from foreign governments.

Would the “mainstream” media, such as the New York Times or the ever-further-left-leaning Denver Post (both of which have endorsed Hagel’s confirmation), tolerate (and participate in) such barefaced hypocrisy if the person in question were a nominee of President Bush or of some future Republican president?

You know the answer, and Democrats know the answer when they look in the mirror. But the beauty of never claiming to have principles is never having to be called a hypocrite, at least not by fellow liberals.

My view of the Hagel nomination is that he is, at best, barely qualified, but that elections have consequences and the Founders did not intend the “advice and consent” function of the Senate to do much more than exclude those nominated out of nepotism or corruption. Therefore, I believe Mr. Hagel should be confirmed even while I also believe he is, as Dick Cheney put it, “second rate.” My emphasis is not so much the (de)merits of Mr. Hagel as the truly remarkable hypocrisy of Democrats throughout this discussion.