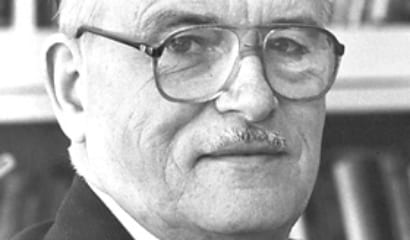 The cover of my late colleague James M. Buchanan’s 1992 autobiography, Better than Plowing, features a picture of the author rocking in a chair on the porch of his farmhouse near Blacksburg, Virginia. With Jim dressed in work boots, dungarees, and a plaid shirt, the photo looks more like one from the Appalachian files of LBJ’s Great Society program than one of an internationally famed, multilingual economist who revolutionized the way scholars think about politics.

Yet revolutionize our thinking Jim certainly did—a feat for which he was awarded the 1986 Nobel Prize in economics.

The Nobel Committee summarized the award by singling out “his development of the contractual and constitutional bases for the theory of economic and political decision-making.” Buchanan did contribute remarkably to the development of such a theory. But any such summary fails to capture the full range and extraordinary depth of his achievements.

Those contributions were made in a ceaseless stream of scholarly books and academic articles over the course of more than 60 years. Buchanan’s collected works through the year 2000—published by Liberty Fund—fill 19 thick volumes (excluding a book-length index). And if his writings between 2001 and 2012 were added to this collection, it would expand by at least another two weighty tomes. Indeed, Buchanan was still vig-orous and writing until he was stricken by the short illness that took his life, at the age of 93, on January 9.

Buchanan’s impressive output reflected a work ethic that was seldom matched and impossible to surpass. In fact, it was so powerful that, on the rare occasions when he would watch television—typically football games—he could not enjoy himself unless he was also performing some non-leisure task, such as shucking corn or peeling potatoes. In his academic work, Buchanan often praised the bourgeois virtues of prudence and industry. In his life, he practiced what he preached.

BORN AND RAISED in rural Tennessee to a populist farm family, Buchanan was, by his nature and his nurture, suspicious of concentrated power and skeptical of elites who promised to use such power for the common good. This skepticism was polished when, after serving in the Navy during World War II, Buchanan earned a PhD in economics from the University of Chicago. There he was heavily influenced by Frank Knight. Like Buchanan, Knight was an irascible farm boy predisposed to be skeptical of all received wisdom. As Buchanan wrote about Knight:

The qualities of mind that Knight exhibited were, and remain, those that I seek to emulate: the willingness to question anything, and anybody, on any subject anytime; the categorical refusal to accept anything as sacred; the genuine openness to all ideas; and, finally, the basic conviction that most ideas peddled about are nonsense or worse when examined critically.

No one who knew Jim Buchanan ever questioned that he successfully emulated his Chicago School mentor.

As he began his academic career in the wake of the Second World War, Buchanan’s skepticism was stimulated by that era’s unreflective faith in democracy. With the New Deal solidly entrenched and celebrated as a democratically engineered advance over antiquated political and economic institutions, with the (mostly) democratic Allies having just defeated the Nazis, with the democratic West fighting a Cold War against a de-cidedly undemocratic state, democracy to the popular mind seemed glorious and powerful, yet at the same time besieged. As a result, the older, sober appreciation of democracy’s limitations was deteriorating. Popular understanding of the need to constrain majoritarian passions with constitutional rules was being lost.

Perhaps it’s coincidental that, while Buchanan served on the economics faculty of the University of Virginia from 1957 to 1968, his analysis of politics matured into what he modestly regarded as a simple updating of—and elaboration upon—the wisdom of Virginia’s greatest political theorist, James Madison. Madison and his fellow constitutional framers certainly appreciated the value of popular sovereignty, but, of course, they were no fans of unchecked democracy.

In 1962, Buchanan and his longtime colleague Gordon Tullock published their path-breaking study, The Calculus of Consent. This volume is today one of the enduring classics of positive political science.

Resting firmly on the premise that people acting politically—in the “public” sphere—are fundamentally the same as people acting privately, Buchanan and Tullock modeled democratic politics in the same way that economists had long modeled private markets: as a nexus of exchange. Rejecting the romantic fiction that politics is a collective search for eternal verities, Buchanan and Tullock built upon what seemed to be the unvarnished reality that voters and politicians are all self-interested, with each having something that the other values. Political bargains and exchanges are the natural outcome. And the specific patterns and consequences of these bargains and exchanges are determined not by the intentions of voters or elected officials, but instead by society’s constitutional rules.

Such “public choice”—as the school of thought founded by Buchanan and Tullock is now called—is motiva-tionally identical to private choice. Yet the society-wide consequences are often very different from those of private markets. The rules of private property and freedom of contract protect each person acting in the private sector from being forced into unfavorable exchanges. The result is that private-sector exchanges generally occur only when each party to those exchanges is made better off. Private exchanges, therefore, almost always produce net gains to society (as assessed by the subjective preferences of the parties to the exchanges).

Not so with political exchanges. Under a democracy, 50.001 percent of the citizens can force the remaining 49.999 percent to do the majority’s bidding, regardless of whether or not the gains to the majority outweigh the losses to the minority. Add to this reality the many institutional features that further distinguish public from private choice—such as the disproportionate influence over politics enjoyed by concentrated interest groups—and the importance of Buchanan’s insistence on examining politics realistically rather than romantically becomes even clearer. The same self-interested motivations that lead people acting in private markets to produce beneficial, society-wide outcomes too frequently lead people acting politically to produce harmful ones.

Buchanan, though, never succumbed to despair over democracy. He had an enduring confidence in high-level political decision-making—about constitutional rules, for instance. He reasoned that if people are obliged to choose general rules, instead of concrete political outcomes, then even self-interested people will bargain toward institutions that channel political actions away from socially destructive avenues and into productive ones.

This happy outcome depends crucially, in Buchanan’s analysis, upon the assumption that people choose constitutional rules only when behind a “veil of ignorance,” a term coined by the political philosopher John Rawls. Those behind this “veil” know no specifics about their own lives in the real world, such as their jobs, in-comes, and ages—whether, in essence, they are kings or paupers. Absent such knowledge, everyone fears government power to bestow benefits on special-interest groups at the expense of society. So when choosing constitutional rules from behind the veil, people will opt for rules thought to best promote the general wel-fare—rules that, Buchanan believed, would prohibit the state from granting special privileges.

FAIR ENOUGH. But for all of his greatness, Buchanan never successfully explained just how today’s actual special-interest groups, politicians, and voters can practically be placed behind a veil of ignorance long enough to agree upon a constitution of the sort that Buchanan believed necessary to protect liberty and prosperity.

Buchanan insisted that the free society can be saved only through an inclusive political process in which people consciously bargain toward (more or less) unanimous constitutional rules. This stands in stark contrast to the evolutionary thesis of a scholar whose work Buchanan otherwise greatly admired: F.A. Hayek. The two agreed that legislation passed in ordinary settings is too often harmful. But Buchanan could not bring himself to share what he took to be Hayek’s skepticism of constitution-making. (Whether or not Hayek really was as skeptical as Buchanan believed is a separate question.) Ironically, then, Buchanan himself was something of a romantic when contemplating the prospects of constitutional reform.

Buchanan recognized the irony. He knew that this faith was in tension with his otherwise pessimistic assess-ment of politics. This small lapse into romanticism is, I submit, forgivable given his formidable success at opening our eyes to the ugly realities of workaday politics.

He mined the rich vein of Madisonian wisdom in earnest while at the University of Virginia, then continued to do so for 14 years at Virginia Tech, and, finally, for 30 years at George Mason University. The enormous volume of careful scholarship he produced, his great and lasting legacy, will prove to be an endless source of insight and inspiration for those who press the case for free markets and liberty.

Buchanan was unequaled at demonstrating the fallacy—to say nothing of the danger—of romanticizing government. It is this profound and powerful lesson that we must hope will become more widely appreciated not only in the academy, but, more importantly, in the general population. If this appreciation does spread, no scholar of the past century—not even F.A. Hayek or Milton Friedman—will have played a greater role than Jim Buchanan in reinvigorating and safeguarding free society.