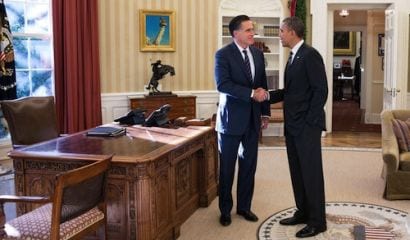 In his first interview since the election, Romney expressed his dismay in not having the keys to 1600 Pennsylvania Avenue. “I wish I were there. It kills me not to be there, not to be in the White House doing what needs to be done,” said the former Massachusetts Governor.

It is interesting that Romney should use the word “kill” in describing his feelings about losing the election. After all, back in the summer of 2011, the Obama campaign concluded that the President could not run for re-election on the basis of his accomplishments in office. Instead, the Obama campaign made it their mission to “kill Romney.”

In the year that followed, the Obama campaign and their surrogates portrayed Romney as a tax cheat, a felon and a murderer, not to mention a man leading the “War on Women” by trapping them in binders. Not only was Romney ineffectual in fighting back, he occasionally handed the Obama campaign extra ammunition as was the case with his infamous 47% remarks.

Yet all that effort was nearly for naught as Romney exceeded all expectations during the first presidential debate while Obama suddenly no longer looked immortal. Had this been replay of 1980 in which this was the only debate between Obama and Romney and if it had been scheduled to take place five days before the election, chances are Romney would be in the White House doing what needs to be done. Instead, Obama had time on his side to get back into the game with two more debates and we have our present state of affairs.

Shortly before Christmas, the Boston Globe published a story on the Romney campaign. The article quoted his eldest son Tagg who revealed that his father did not want to run for President for a second time:

“He wanted to be president less than anyone I’ve met in my life. He had no desire to …run. If he could have found someone else to take his place… he would have been ecstatic to step aside.”

There is no reason believe that Tagg Romney isn’t telling the truth and no one has suggested so. So it is quite possible that after the first debate, Romney thought to himself (perhaps on a subconscious level), “Holy crap, I could actually win this thing.” In which case, instead of spending the final month of the campaign going for the knockout punch (in effect “killing Obama”), he spent it resting on the laurels of the first debate.

Yet all of this is not to castigate Romney. What’s done is done. Rather, this is a cautionary note to Republicans aspirants for 2016. Any Republican who makes a bid for the White House had better be damn sure that this is what he or she wants and wants it more than life itself. Because any Republican that does will have to accept everything that comes with it, up to and including being called a cheat, a felon, a murderer — and spend at least $1 billion for the trouble. The Republican nominee in 2016 will also probably be facing Hillary Clinton. Like Barack Obama, Hillary wants to be President more than life itself and plays for keeps. The fact that Hillary was denied her place in the White House by Obama in 2008 makes her all the hungrier to be President. There will be a huge target on the back of the Republican nominee in 2016. Whoever Republicans nominate had better be prepared to place a bigger target on Hillary’s back. Otherwise, in four years time, we will have yet another Republican telling us it kills them not to be in the White House.