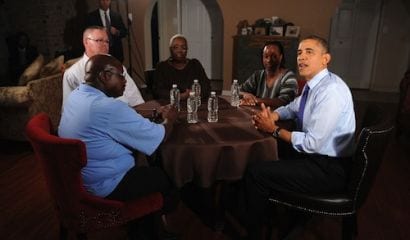 Under economic pressure, the Obama administration has pursued an increasingly vigorous class war strategy. At the same time people continue to be dropped from the income tax rolls. This likely expands government and increases what the rest of us will have to pay.

Throughout its early history the federal government didn’t have an income tax. But a century ago the states ratified the 16th Amendment. Even then, in its early years the income tax affected few people. Only during World War II, when up to three-quarters of the national GDP was consumed by the military, did the income levy become broad-based.

However, the U.S. is now moving in the opposite direction. A recent study by William Freeland, William McBride, and Ed Gerrish for the Tax Foundation reported that 58 million people, 41 percent of all tax filers, had no tax liability; indeed, many of them are receiving money back from the government. Explained the Foundation: “There are currently more Americans off the tax rolls than at any time since 1940, when the income tax became a ‘mass tax’.”

Nonpayment results from the expansion of deductions and credits, including those which are refundable, that is, which generate a federal check for those who owe nothing. Under 2011 law, noted the Tax Foundation, a family with an income of $45,000 could end up receiving $274 after taking the standard deduction, personal exemption, two child credits, and the Earned Income Tax Credit. The family also might be eligible for credits for child care, education, and hybrid vehicles.

In 1950, 28 percent of filers were “nonpayers.” That reflected a relatively high value of the personal exemption compared to average incomes. The nonpayers’ share dropped to 16 percent by 1969. It rose again to 26 percent in 1975, and then dropped until the 1986 Reagan tax reform. Reported Freeland, McBride, and Gerrish, “Since then, the percentage of tax filers with no income tax liability has grown dramatically. Indeed, in the twenty years between 1990 and 2010, the percentage of nonpayers nearly doubled, from 21 percent to 41 percent.”

Related to nonpayers are nonfilers. Millions of people earn something, but not enough to require them to file a tax form. “By some estimates, when these nonfilers are added to the number of nonpayers, the total number of Americans outside the income tax system jumps to roughly 50 percent of all households,” observed the Foundation.

Tax reform increased the values of the personal exemption and standard deduction, which benefited everyone, but especially lower-wage earners. More recent has been the rapid growth in the value of tax credits, which directly reduce a filer’s tax liability. Noted the Foundation: “In 1990, the combined value of these credits was roughly $20 billion, after adjusting for inflation. Two decades later, the combined budgetary cost of both the basic and refundable tax credits reached a remarkable $224 billion in 2010.”

An important reason the credits cost more is that they are available to more people. Explained the Foundation: “In 2001, the share of those tax filers between $50,000 and $75,000 with no income tax liability was roughly one percent. By 2009, that share had jumped to 12 percent. The threshold at which the typical married couple with two children will likely be nonpayers given the standard deduction, personal exemption, and only two dependent child credits is now roughly $47,000. This is without any additional deductions or credits, such as the mortgage interest deduction.”

Of course, nonpayers are subject to other taxes. Indeed, most low-wage workers pay more in Social Security than in income tax levies. However, the income tax is the biggest and most visible source of federal revenue. It also is seen as the chief source of funds for general government operations, in contrast to others, such as the payroll tax, which are formally dedicated to particular purposes (even though, in practice, money is fungible). People seem most likely to measure the personal cost of government by their income tax liability.

If government spending were going down, we might celebrate the rise of nonpayers. Reducing the number of people subject to the burdensome and intrusive income tax would be an unabashed good. However, government expenditures have been rising steadily and rapidly. Real, inflation-adjusted outlays jumped 58.4 percent between 1980 and 1990. They “only” increased 28.2 percent during the 1990s. They went up almost exactly the same amount during the first decade of the 21st century. It certainly appears that more people perceive government as an essentially free good as a result of what is commonly called the “fiscal illusion.” Explained the Tax Foundation:

Basic economic theory tells us that consumers will respond to a drop in the price of a product by demanding more. By extension, economists predict that as the price of government goes down for a citizen, he or she will then demand more of it. When the cost of government is shifted away from a citizen through deficit spending or progressive taxation, this creates disproportionate demand.

Yet satisfying this demand is likely to slow economic growth. The Foundation recognized the argument that expenditures on education and infrastructure may yield an economic benefit, but observed:

Does the rise of nonpayers encourage increased outlays? The Tax Foundation reviewed federal spending and taxing from 1950 to 2010 and found only a weak correlation. As the Foundation noted: “total government spending grew steadily over the 60 year time period we considered, while the percentage of nonpayers fluctuated considerably.” It appears that the overall bias toward government growth essentially swallowed much of the impact of the growing number of nonpayers.

However, the Foundation discovered a stronger relationship between nonpayers and transfer payments. Noted the Tax Foundation: “After the late 1960s, with the start of the Great Society programs, the growth of transfer payments and the growth of nonpayers begin to move closer together. For example, the percentage of nonpayers spiked in 1975 to nearly 26 percent. This spike corresponds to a sharp increase in transfer spending. Over the past 25 years, the two trends seem to track each other quite closely, with both reaching their 60 year peak in 2009 and 2010.”

The Foundation figured that every one percent increase in the share of nonpayers corresponded to an increase of $10.6 billion in transfer payment outlays. The money adds up. Explained the report: “Since the number of nonpayers has increased by 20 percentage points over the last two decades, this model implies that in 2010 alone, almost $213 billion in higher transfer payments resulted from the growth of nonpayers over the last two decades. This represents nine percent of the total $2.287 trillion spent in transfer payments that year.” Stripping out Social Security and Medicare do not change the relationship, but only cut the estimated annual increase to $9 billion.

No such association was evident for non-transfer payments. Although that would seem counter-intuitive, the authors posited that “non-transfer payment spending does not go directly into the hands of the voters. Instead, this spending is often composed of indirect investments and the benefit from this spending is widely dispersed among all voters.” Moreover, perhaps these outlays have hit the point of diminishing returns, and thus voter demand has fallen. Or perhaps overall budget constraints exist and have placed transfer and non-transfer payments in competition, with the former emerging victorious.

The Foundation also found a positive correlation between nonpayers and federal debt. For every one percent increase in nonpayers as a share of filers, the debt/GDP ratio rises .704 percent. “This implies that the 20 percentage point increase in the share of nonpayers over the last 20 years has increased the debt ratio by 14 percentage points.” Such a rise logically follows the increased demand for transfer payments when taxpaying voters seem increasingly averse to higher taxes.

In Washington today the greatest concern over nonpayers is lost revenue. However, the underlying problem is that government spends too much, not that it collects too little. Unfortunately, noted the Foundation, “we are now seeing the fiscal cost of dropping millions of Americans from the income tax rolls in the form of record levels of federal transfer spending and national debt.”

Thus, despite the obvious appeal in further reducing the tax rolls, the Foundation’s “findings imply that when voters perceive the cost of government to be cheaper than it really is, they demand ever more government benefits because they either don’t feel the cost directly or believe that others will be paying those costs.” Which means meaningful tax reform should address the problem of nonpayers.

The Foundation concluded with a call for “a more balanced tax burden.” The wealthy already pay the vast majority of income taxes. According to the Congressional Budget Office, the total share of income tax liabilities paid by the top one percent of households ran 39.5 percent in 2007 (the CBO’s latest figures). The top five percent paid 61.0 percent of all income taxes. The highest earning ten percent were responsible for 72.7 percent of income tax collections. (The same groups also pay the bulk of corporate and social insurance taxes.) It simply isn’t possible to fund the welfare state by extracting more money from those who already are paying the bulk of the bill.

Especially since the attempt to do so likely would further inflate federal outlays. Concluded the Foundation: “so long as income taxes fund the largest part of government spending, exempting half the population from income taxes is not a sustainable fiscal model. Debt accumulation and eventual default await those democracies that fail to connect a majority of voters to the cost of government spending.”

Reconnecting voters may be the most important objective of tax reform. Reducing rates and simplifying administration are important. But ensuring that all Americans have a financial stake in paying for general government operations, and especially transfer payments, may be most vital.