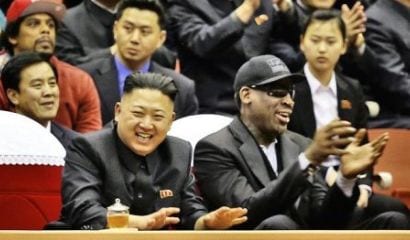 Gone is Dear Leader and sophisticated fashionista Kim Jong-il, with his platform shoes, bouffant hair, and over-size sun glasses. However, son and Great Successor Kim Jong-un, though possessing more mundane sartorial tastes, is proving to be worthy of his official title. For Kim fils is fast becoming an international sensation, along with his wife, Ri Sol-ju, and U.S. basketball legend Dennis Rodman.

Kim, informally known among North Korea watchers as the Cute Leader, has broken the mold of his two totalitarian predecessors, attending prep school in Switzerland, following American basketball, enjoying Disney characters, and showcasing his attractive young wife with designer purse. All of this has given rise to speculation that Kim is a closet liberal — after all, how could he sample life in the West without falling in love with liberty?

Now the communist monarch is hanging out with Dennis Rodman — known as much for his off-court antics as his professional play. The two seemed to have a good time, with Rodman lauding the “epic feast” organized by his “friend,” who was an “awesome guy.” Rodman also called Kim’s father and grandfather, whose victims could fill the heavens, “great leaders.” But that only makes sense since Kim Il-sung, the founder of the Democratic People’s Republic of Korea, was officially known as Great Leader.

Alas, a European education doesn’t guarantee democratic tendencies. China’s Chou En-lai studied in Paris, as did the genocidal Pol Pot, who turned Cambodia’s landscape red with blood. Syrian Bashar al-Assad is killing his people even though he is a London-trained ophthalmologist. KGB chief Yuri Andropov, who in 1982 took over as General Secretary of the Soviet Communist Party, didn’t attend a Western university but was acclaimed a likely reformer because he was a jazz aficionado and collector of abstract art. Never mind all of those years busily imprisoning Soviet dissidents.

Maybe the trappings of the West aren’t enough. But Kim Jong-un apparently has become a father, preempting Britain’s Prince William. Surely that will make Kim a liberal free-thinker dedicated to social justice and all that is good and wonderful in the universe.

The South Korean media is reporting that Ri gave birth last month. There was no public announcement, however, suggesting that the baby was a girl. Alas, Kim, despite his winning smile and fondness for basketball, appears to be a male chauvinist, just like most everyone surrounding him. Although Kim’s aunt, Kim Kyong-hui — Kim Jong-il’s favorite sister — was and remains a power in the regime, the leadership otherwise is male. Maybe Kim Jong-un isn’t a secret liberal after all.

But then, his behavior tells us that. Economic reform is an obvious necessity, given the continuing catastrophe known as the DPRK economy. Moreover, he has talked about raising living standards amid rumors of changes in both agricultural and industrial policy. But so far economic reform appears to be more talk than reality, with the regime simply swapping deck chairs on the Titanic. Rather than reduce Pyongyang’s almost total control, his government has shifted responsibility for lucrative business operations back from the military to the party and focused on making deals with China.

The only political change of note has been his government’s move to reassert party domination over the military, which does nothing to liberate the suffering citizens. The “awesome” Kim has not backed away from his father’s “military first” policy when it comes to resources: North Koreans may be hungry, but Pyongyang found money for a nuclear test this year and two rocket launches in 2012. Unfortunately, the majority of North Koreans don’t get to enjoy the sort of “epic feast” prepared for Rodman by his close friend.

It isn’t easy to measure domestic repression except through the reports of refugees, and there are fewer of them because Pyongyang has tightened border controls. Hundreds of thousands of desperate North Koreans have fled north across the Yalu into China. Many have been repatriated by Beijing —with awful consequences. Now few have a chance to even risk a rush to freedom.

Finally, the government formally headed by Kim (whether he is really in charge, part of a collective leadership, or more of a figurehead is not obvious) has continued with the North’s long-time policy of brinkmanship and provocation. Although Rodman said that Kim asked President Barack Obama to “call,” the North Korean military command subsequently threatened to respond to new UN sanctions by canceling the 1953 ceasefire. The Kim regime explained: “We aim to launch surgical strikes at any time and any target without being bounded by the armistice accord and advance our long-cherished wish for national unification.”

So much for the Cute Leader heading a reform parade.

Of course, the relatively young Kim — probably 30, though the regime routinely lies and obfuscates when it comes to any facts about the leadership — might be playing a long game, securing his position before unveiling a dramatic reform agenda. However, he more likely is committed to retaining his luxurious privileges, which would vanish if the DPRK became a normal country.

Indeed, the risks of liberalization for not just Kim but the entire elite ruling class are high. The North Korean population has suffered and starved for decades and increasingly knows that the system is a lie. Relax totalitarian controls and a lot of “awesome” people, starting with the Cute Leader, might end up adorning lampposts. To the nomenklatura the costs of reform likely look a lot higher than the potential benefits.

Which means not much will change. Pyongyang sees a nuclear arsenal as the way to prevent American-supported regime change, à la Iraq and Libya, and continued repression as the way to prevent a grassroots revolution, à la Tunisia and Egypt. Nothing that has happened in the 14 months since Kim’s ascension suggests that he or anyone else at the top has abandoned either of these fundamental policies.

This isn’t an argument against any engagement, but against the persistent triumph of hope over experience form of engagement. Obviously, years of negotiations have not produced an enforceable nuclear settlement. But there is no military option, since the most important objective on the peninsula is to maintain the peace. Isolation has failed and will continue to fail without Chinese support. Official aid and subsidized trade have only underwritten North Korean misbehavior.

The U.S. should be open to any meaningful North Korean overture while preparing for a world in which the DPRK survives and expands its nuclear capabilities. The North’s unique system of monarchical communism will end some day. But it increasingly looks like any change will occur despite, not because of, the Great Successor.

Kim Jong-un appears to genuinely like basketball. Unfortunately, that does not make him a reformer. Dennis Rodman’s “awesome” friend just happens to be a dictator who likes basketball.