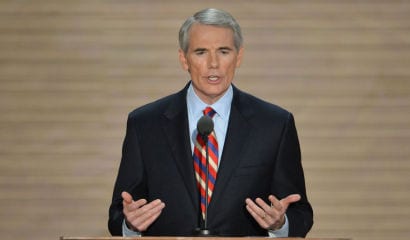 While it is true that Ohio Senator Rob Portman’s about face on gay marriage has not been embraced by conservatives; liberals aren’t giving him any love either.

Portman’s change of heart came on account of his 21-year old son Matt who revealed his sexual orientation to him two years ago. He detailed this in an op-ed in the Columbus Dispatch:

Knowing that my son is gay prompted me to consider the issue from another perspective: that of a dad who wants all three of his kids to lead happy, meaningful lives with the people they love, a blessing Jane and I have shared for 26 years.

Matt Yglesias of Slate takes Portman to task for his reasoning:

While I would like to say that it makes me happy to have the first Republican senator come out in support of marriage equality, I am having a difficult time getting past the whole “I need this EXACT situation to affect me PERSONALLY before I can do anything” mentality that seems to persist in the halls of Congress.

Do I need to have a close relative have Parkinson’s disease to think there should be government funding for a cure? Does a member of my family need to be African American for me to think the Voting Rights Act needs to be renewed? Does my house have to be destroyed by a hurricane to vote for emergency relief funding? The utter lack of empathy displayed by so many elected officials sickens me to the point that if and when some of them finally see the light, I almost hate them more… for showing a complete lack of conviction.

Yet consider what President Obama told Robin Roberts of ABC News last May right after he reversed his own view on gay marriage:

You know, Malia and Sasha, they’ve got friends whose parents are same-sex couples. And I — you know, there have been times where Michelle and I have been sittin’ around the dinner table. And we’ve been talkin’ and — about their friends and their parents. And Malia and Sasha would — it wouldn’t dawn on them that somehow their friends’ parents would be treated differently. It doesn’t make sense to them. And — and frankly — that’s the kind of thing that prompts — a change of perspective. You know, not wanting to somehow explain to your child why somebody should be treated — differently, when it comes to — the eyes of the law.

OK, so neither of the President’s daughters has said they are openly gay. But that doesn’t matter here. When it came to changing his position on gay marriage, Obama credited his daughters just as Portman credited his son for helping him to see things from a different perspective. Did Ygeslias or Walsh take Obama to task for the influence of his daughters in changing his views? What do you think?

As I have argued previously, the Left doesn’t really care about gay marriage except if a white, Christian Republican opposes it. Barack Obama did not support gay marriage in 2008 and would not have done so in 2012 if not for the loose lips of Vice-President Biden. Liberals would have supported President Obama last year, gay marriage or no gay marriage.

The great late 18th century, early 19th century English poet and philosopher Samuel Taylor Coleridge put it succinctly when he said, “I have seen great intolerance shown in support of tolerance.” The bottom line is that liberals do not care if a Republican supports gay marriage. As far as liberals are concerned, it makes no difference if Portman supports same sex marriage or calls homosexuality a sin. In Walsh’s own words, “when they finally see the light, I almost hate them more.” As long as Portman has a capital R affixed to his name, liberals will have as much contempt for him today as they did yesterday. Portman can change his perspective but liberals can’t change theirs.