Most telling is the tendency of many journalists to speculate that the Blagojevich scandal may ensnare Obama without acknowledging that the complaint against Blagojevich contained absolutely no evidence of wrongdoing by Obama . . .
Associated Press reporter Liz Sidoti set the standard for pointlessly speculative news reports with an “analysis” piece declaring that “President-elect Barack Obama hasn’t even stepped into office and already a scandal is threatening to dog him.” . . .
We cannot afford to be distracted from serious problems by overheated conjecture and baseless insinuation masquerading as journalism.
That’s how the media behaved the last time we had a Democratic president. They devoted wall-to-wall coverage to invented “scandals,” ignored exculpatory evidence, saw evidence of guilt everywhere, took people out of context in order to accuse them of lying, and generally behaved like a pack of wild animals who couldn’t tell right from wrong or truth from fiction — or who simply didn’t care. As a group, they behaved without ethical standards and without regard for the truth.

Foser is correct that nothing now known indicates wrongdoing on Obama’s part. However, the revelation that Obama’s choice for chief of staff, Rahm Emanuel, was in communication with Blagojevich — sending him a list of potential Senate replacement appointees acceptable to Obama — undermined Obama’s press conference claim that “no representative of mine would have any part in any deals related to this seat.” 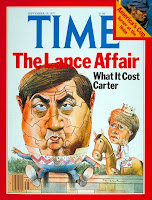 Foser compares the press coverage to how the Whitewater scandal dogged the Clintons, but a more accurate analogy would be to the scandal that felled Jimmy Carter’s OMB director, Bert Lance. A Georgia banker and influential figure in state Democratic Party politics, Lance was forced to resign eight months into the Carter administration by revelations about his financial dealings. Lance was never convicted of any crime, and the scandal involved no suggestion of wrongdoing by Carter, and yet the swirl of accusations damaged — if it did not entirely destroy — Carter’s image as a squeaky-clean reformer. Perhaps most importantly, the Lance scandal brought an early end to whatever honeymoon Carter had enjoyed with the Washington press corps.

The scolding of Foser and other liberals won’t undo the damage that the Blagojevich scandal has already done to Obama, and more damage is likely. The Republican National Committee has issued a Web video aiming to cement in the public mind the idea that Obama (a) is a close ally of Blagojevich, and (b) has been dishonest in his responses to the scandal:

(Cross-posted at The Other McCain.)

Robert Stacy McCain
Follow Their Stories:
View More
Robert Stacy McCain is the author of Sex Trouble: Essays on Radical Feminism and the War Against Human Nature. He blogs at TheOtherMcCain.com.
Most Popular
1
Special Report
The Myth — and Grift — of Long COVID
by Michael Fumento